From the top 40 success of Citizen King to the international acclaim of The Promise Ring, the late ’90s were an incredibly vibrant time for Milwaukee’s music scene. During this period, the city had its fair share of acts that were finding success beyond the local level. This era was also a time when Milwaukee’s DIY scene thrived, with multiple houses and venues hosting all-ages shows for both local and national acts. Bands like Forstella Ford, Since By Man, and Hero Of A Hundred Fights helped establish Milwaukee as a destination for acts that operated outside of the framework of the traditional music industry. Of all the acts from that particular era, though, none embodied the spirit of DIY more than Seven Days Of Samsara.

Bassist and vocalist Dave Rudnik, guitarists Andy Silverman and Jeff Meilander, and drummer Matt Ungerman spent the better part of the late ’90s and early 2000s touring, releasing music and booking shows completely self sufficiently, save for the help of friends and other members of the underground music community. While the band never officially broke up, their level of activity greatly slowed down over the last decade.

“A last show was something I thought about for a long time,” Rudnik says. “Andy was the one who kind of said that these would be our last shows, and I didn’t challenge him on it.”

With 2018 serving as their 20th anniversary, the band has decided to celebrate with the release of a double LP discography and a handful of farewell shows.

“I love Seven Days, and I always will,” Silverman says. “But I didn’t want to taint what we had or the things that I love about the band.” 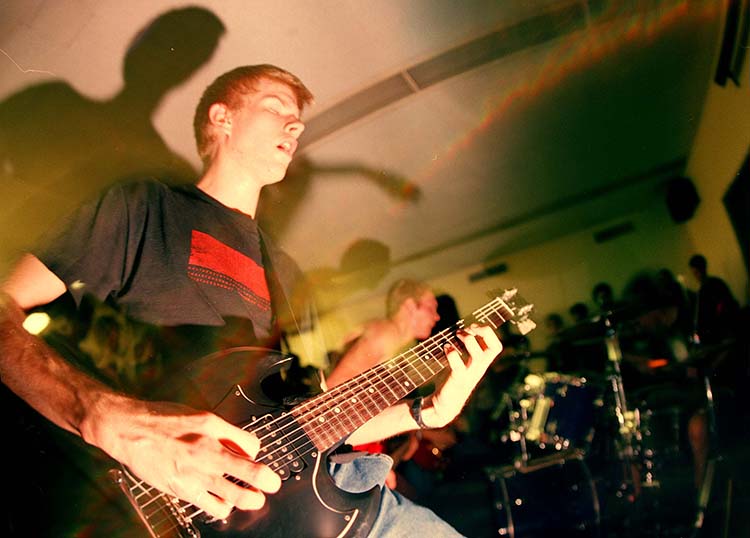 The band formed in 1998, with Rudnik approaching Ungerman after noticing his Snapcase T-shirt. Rudnik was eventually introduced to Meilander and Silverman, with the band coming together over a mutual love of a variety of bands in the underground. Braid, Neurosis, and Hot Water Music were all reference points for their new band, though once the songwriting process began, the result was something a bit more difficult to define.

“The band was too metallic to be considered screamo, too melodic for the mosh crowd, and the term ‘metalcore’ had yet to be invented,” Rudnik says.

While their influences may have been a bit eclectic, Seven Days Of Samsara created something that was as heavy as it was beautiful, as hook-laden as it was abrasive. Though hard to place, the band found themselves appealing to many in the underground.

“We had a good response right off the bat,” Rudnik says. “We played with bands we looked up to and really liked, and we played with them right away. Something was different about it.”

Much of this was likely due to the thriving DIY scenes across the country at the time, Milwaukee included. In a time where DIY venues and house venues in Milwaukee are currently near-extinct (save for a few exceptions), Milwaukee’s DIY spots were experiencing a renaissance 20 years ago. Multiple houses in Riverwest like the Pierce Street House and Bremen House, as well as spaces like the Shorewood Legion Hall, hosted all-ages punk and hardcore shows. Even Milwaukee’s East Side played a role in the growing community. The Globe (the former club that would eventually become The Hotel Foster) hosted a number of early all-ages shows, though Rudnik speaks most affectionately of a short-lived venue on the UW-Milwaukee campus.

“What is now Sala, around the corner from Panther Bookstore, used to be a coffee shop called the Couch,” Rudnik says. “They had practice spaces for rent in the basement, and a stage upstairs, and they’d do shows. I only played there twice, and both times the room was packed front to back. Easily two of the best shows I ever remember playing in Milwaukee.”

While the venue closed its doors after a year, Rudnik believes that it held a considerable amount of potential, saying “If they had been allowed to stick around, Milwaukee’s punk scene would be so huge right now.” 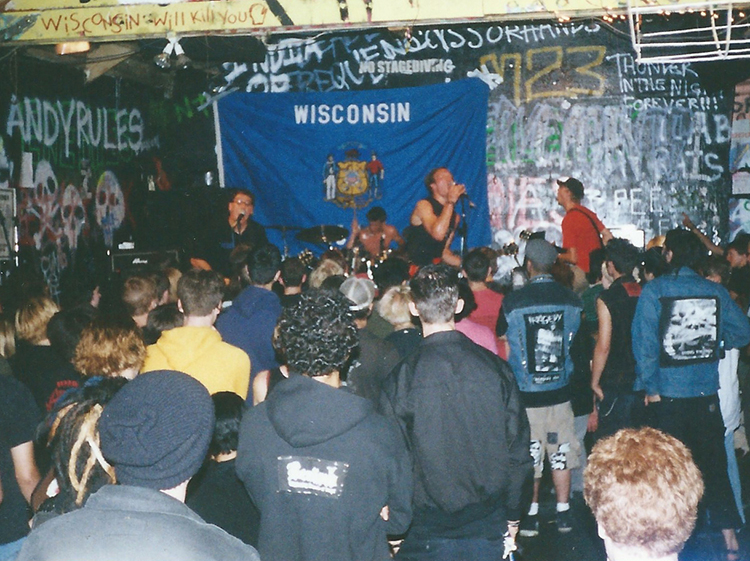 Seven Days’ level of activity and drive was admirable. The band played 250 shows and put out seven releases in their first six years as a band. “We’d tour two to three months out of the year and play three out of four weekends a month,” Rudnik says of the band’s most prolific period.

“We’d drive to Ohio or Louisville or Minneapolis, and back in a weekend,” Silverman says. “[We would have] eight-hour drives, and [be] back in time for school on Monday.”

During that period, the band found themselves playing all over the world, including legendary spaces like 924 Gilman Street in Berkley, California. 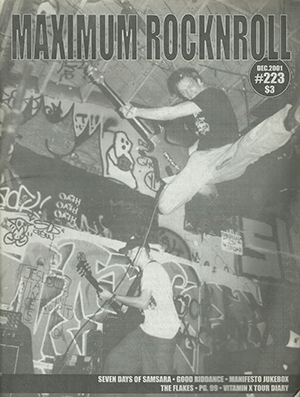 “Playing Gilman was a dream for me, and the fact that we were on the cover of Maximum Rock N Roll playing Gilman was completely insane,” Silverman says. “You could say it was a bucket list item, but you would never be so ambitious as to even put it on your bucket list.”

By the early 2000s, major labels were beginning to take interest in the underground in the same way they had just a decade prior, and acts like The Blood Brothers and Converge found themselves signing with large labels. This feeding frenzy found its way to Milwaukee, with hardcore institution Revelation Records signing Since By Man, Call Me Lightning, and Temper Temper. While labels and execs were rumored to have interest in Seven Days, nothing came to fruition.

This isn’t to say that the band was stone-faced and hyper-serious. Homemade pyrotechnics, choreographed dance moves, and jugglers all found their way into their live shows, and the band even appeared in the audience of MTV’s TRL during a Papa Roach interview. This sense of fun and whimsy came from the fact that at their core, Seven Days of Samsara were four incredibly close friends.

As the decade progressed, the band’s level of activity slowed, with members spending time playing in bands like Get Rad, Bosio, No Future, and High On Crime. Silverman focused on school and helping with the development of Milwaukee Day. Meilander started his own business, Redwall Screenprinting, building on his experience of screen-printing shirts for the band. Rudnik continued to play in bands and book shows while also raising a family. Ungerman worked as a bike messenger and is now an electrician’s apprentice. In the last decade, the band has only played a handful of shows, and while 2018 could have been a relatively quiet year for the band, the reunion of legendary DC punk band Majority Rule proved to be the perfect opportunity for the band to finally call it quits.

“We played with them on our first tour and on every other tour after that. They’ve been our friends forever,” Rudnik says. “When thinking about our last show, I always wanted it to be with bands that we played with day-in and day-out, and the fact that we get to play with one of them is awesome.”

Also on the last-show bill are Paige Marshall, a short-lived Milwaukee hardcore band from the early 2000s who reformed specifically for the occasion.

“None of us would be involved with punk music or still care about it today if it weren’t for Seven Days Of Samsara,” Paige Marshall bassist Greg Hempel says. “We’re all such huge fans and it’s amazing that we get to do this. The fact that we get to play with both of those bands is such a big deal for all of us.”

With a desperate lack of all-ages spaces in the city, finding a venue that was large enough to host the show was somewhat of a challenge (the last time Majority Rule played in Milwaukee, the audience was too large for the basement that hosted the show). After considering all of his options, Rudnik finally decided to host it at Club Timbuktu in Riverwest.

“Club Timbuktu is great. The owner Youssouf is a great dude, and it’s a great space,” Rudnik says. “We don’t have a ton of options for all-ages venues in Milwaukee, so I’m really grateful for us to be able to have the show there.” 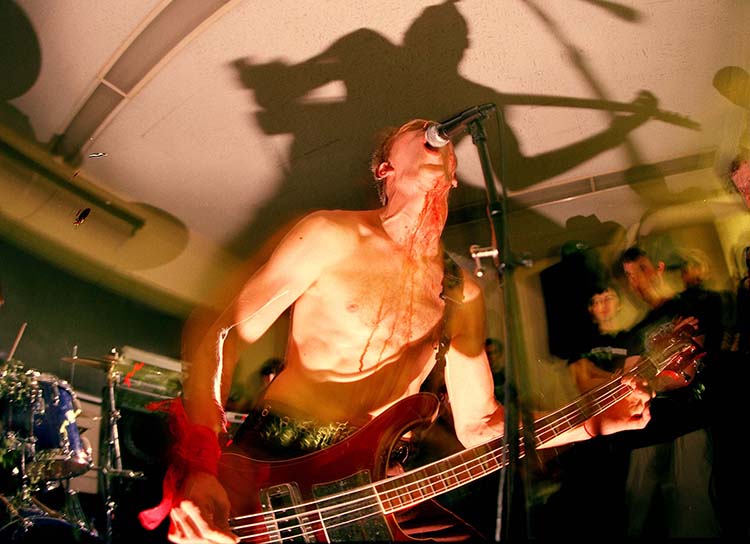 With the band throwing in the towel this year, one can only wonder what the future holds for its members. Still, their commitment to and involvement with DIY is something that will stick with them for years to come.

“Is there another way to do it?” Rudnik says. “I wouldn’t know how to do it any other way. I’m still in bands and booking shows because I don’t know how to not do those things. I’ve been doing them since before I could drive. It’s who I am.”

The band will always be remembered, if anything, for being a key element in the development of Milwaukee’s DIY community alongside people like Eric Schultz, Kelsey Kaufmann, Cory Von Bohlen, Jason Ellis, and Jay Linski.

Rudnik reflects on the band’s legacy with modesty: “We were just four friends that got to play music together,” he says.