The first out-of-town destination I drove to after receiving my driver’s license was a little indie record shop about half an hour from my rural Ohio hometown. In 2001, it was the nearest place, to my knowledge, where I could find actual, physical copies of the albums I’d pieced together from MP3s posted on Geocities-hosted fan sites.

There, at Side-One Records in Richmond, Indiana, I found a haven for building a collection of music that would become the soundtrack to my teenage years. Every other week or so, I’d rev up my 1988 Toyota Celica and putter down meandering, cornfield-lined roads, crossing state lines to arrive at my favorite record shop. After a while, the shop owner, Willy, and his employees got to know me, familiar with my timid “hello” as I walked through the door, making a beeline to the punk/emo section. They’d give their nod of approval to my latest purchases and pass along recommendations, and it felt nice to have this small connection coming from a town where I felt so isolated in my musical interests.

On one of my visits, Willy sauntered back as I was browsing and plucked a CD from the new releases section: the Benjamins’ The Art Of Disappointment. I’d never heard of the band, but the album was released on Drive-Thru Records, and, back then, that was good enough for me. I added it to my stack and as soon as I hopped in my car and painstakingly peeled off the jewel-case sticker, I threw the disc in my car’s cassette-to-CD adapter for the drive home (an incredibly 2001 thing to do).

From the first cymbal clangs on album-opener “Couch,” I was hooked. Though I’d never had a boyfriend to that point, I felt the longing of that empty side of the couch born from a breakup. I imagined myself as the Manic Pixie Dream Girl singer-guitarist Jay Stys chirps about in “Wonderful” and simultaneously air-guitared along with the riffs. I happily joined in on the Buggles-esque “whoa-ohs” during the chorus of “Sophia on the Stereo.” My drive home from Side-One that afternoon felt a lot more colorful than the drive there. The album traveled with me most places after that.

The CDs with the heaviest rotation lived in my car’s visor sleeve for the easiest access—and for the majority of 2001, that’s where the record stayed (along with that of another relatively recent release from a prominent Milwaukee band: The Promise Ring’s Very Emergency). It came with me to my job at our local park’s concession stand, softly jangling from the boombox speakers in the background as I served up twist ice cream cones and counted penny candy for the kids making pit stops during afternoon bike rides. It fuzzed through my headphones as I rattled off cryptic away notes on Instant Messenger. It played as the soundtrack to aimless joyrides through the countryside, wielding the freedom of a new driver’s license and a car of my own but with no place to go. It was a damn good teenage summertime record, all bright and shiny with fuzzy edges, filled with catchy melodies, crescendoing choruses, and even a lyrical shoutout to Molly Ringwald, to boot. I often played the album for any passengers in my car to help find common ground—the music was accessible and head-boppy enough for my Top 40-leaning friends with just enough guitar crunch for my punk-loving pals. To borrow lyrics from the album’s “Sophia on the Stereo”: “It sounds like lazy summer Sundays / It sounds like something that we both like.”

Relatively, the Benjamins hadn’t existed as a band for long before catching their break. They formed in 1998, released their Bordering On Boredom EP in 1999, did some occasional touring, and caught the attention of Drive-Thru Records while opening for Milwaukee’s Citizen King, who’d scored a hit the previous year with their song “Better Days (And The Bottom Drops Out).” They signed a record deal with Drive-Thru in 2000, and the following February (February 27, 2001, to be exact), The Art Of Disappointment was released. Almost immediately, the band set out on tour, supporting bands such as Reel Big Fish and Sum 41, and landing a slot on that summer’s Warped Tour. Their power-pop sound never quite fit in with those of their tourmates, and the breakneck schedule and waning support allegedly took a toll—they disbanded before the end of the year. As such, I wasn’t able to see them play live, and though that album had a place close to my heart, without followup efforts, it was shuffled to the back of my CD book and somewhat forgotten in my ongoing quest to devour all new music that came my way. 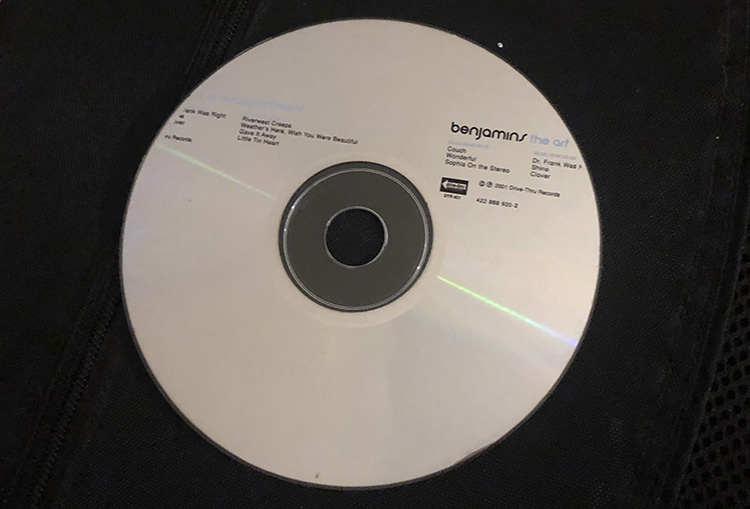 Fast forward seven years. In the summer of 2008, I moved to Milwaukee from Ohio and was settling into my new life on the East Side. My George Costanza-level stuffed CD book made the move with me, and one day as I was paging through the albums that defined my youth, The Art Of Disappointment jumped out at me. Wait…weren’t these dudes from Milwaukee? It had been a number of years since I’d heard the album, and—as I fired it up after all that time—rather than catching up with an old friend, it was more like visiting a friend’s hometown and understanding them just a bit more deeply. Suddenly, I knew exactly what a “Riverwest Creep” was, and I could picture that old green “Couch” in the den of some dusty Upper East Side bungalow. I related to the angst of being a young 20-something who’s “not getting any younger” in the Upper Midwest—just slightly different than the angst of a teen in the Midwest I grew up in. Turns out, I was introduced to Milwaukee years before I’d ever stepped foot here, the Benjamins acting as a gateway band to my discovery of the local music scene I’d soon immerse myself in. The album I’d listened to countless times as a teen in rural Ohio took on new life in my new city.

In 2014, the Benjamins briefly reunited to record a five-song EP, Back On Track, and that same year I was able to catch one of their reunion shows at Turner Hall, essentially closing the circle on that piece of my musical past (I can still feel the morning-after throat scratch after that night’s singalong). My tastes have evolved and changed since I first heard The Art Of Disappointment just shy of 20 years ago, but I still put it on from time to time and soak up the nostalgia. It’s fun to think back on 16-year-old me playing this record on loop, completely unaware that she’d one day live in the city they alluded to in their lyrics. Even now, it sounds like lazy summer Sundays. It sounds like something that I still like.