Everyone loves a “lost” album. Whether it’s a legendary artifact (think the Beach Boys’ original Smile) or a local curiosity (think The Haskels’ self-titled record from 1979), there’s something irresistible about a once-lost album rescued from the mists of time. But what about entire catalogs that have been “lost”?

Enter The Trusty Knife, one of Milwaukee’s finest, most enjoyable indie-rock outfits of the mid-2000s. Featuring core members Zack Pieper, Brock Gourlie, and Anton Sieger (with a revolving cast that included Ross Bachhuber, Annie Killelea, Didier Leplae, and Tony Scholl), the group could be counted on to pack any and all Milwaukee clubs—as well as the dance floors contained within. Shows were sweaty, joyous affairs. Songs and memories were beloved. The group left behind almost no recorded materiel. 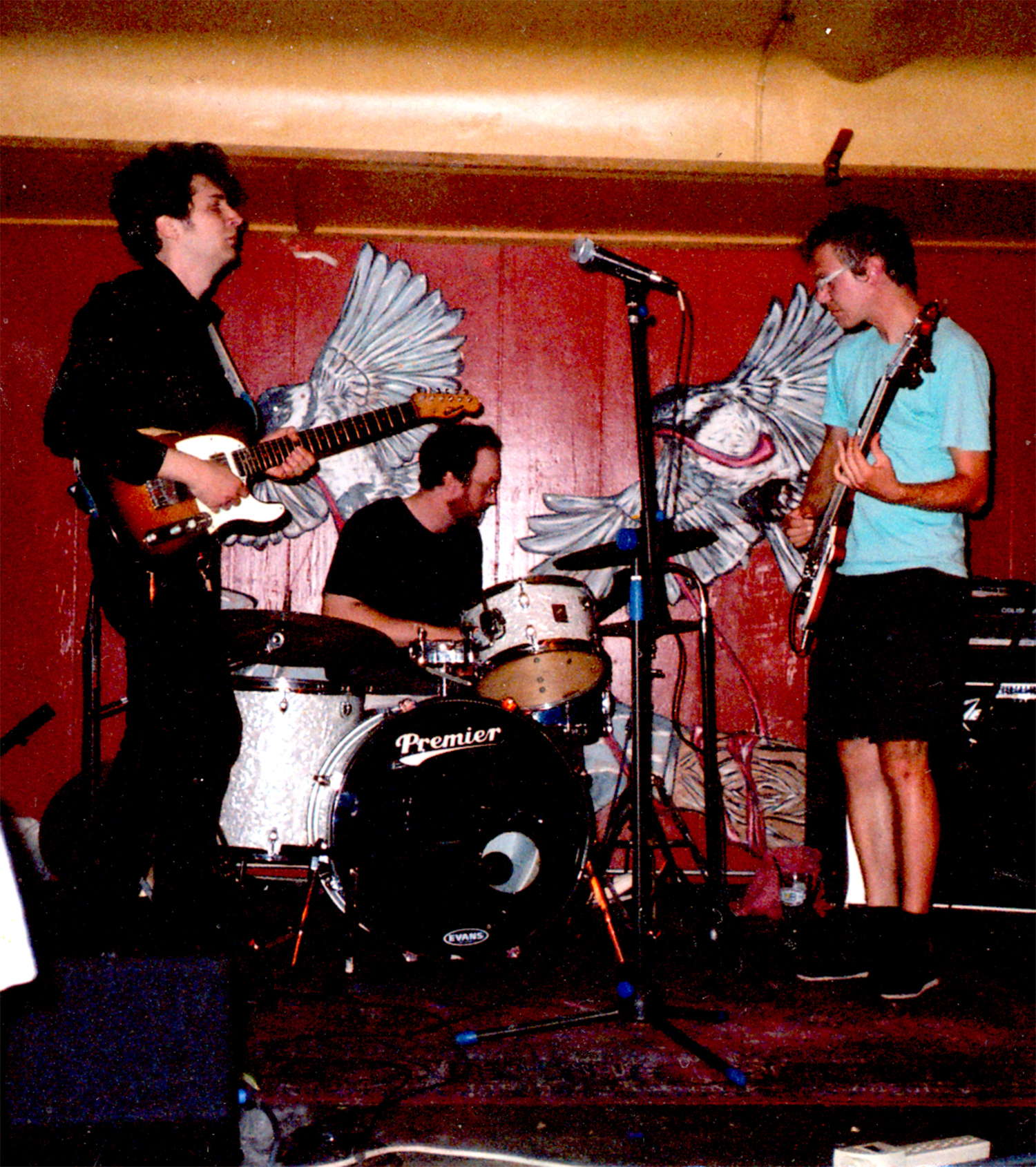 Yes, The Trusty Knife existed in that weird pre-streaming, pre-Bandcamp, pre-Soundcloud era of DIY music. Burnt CDs were the order of the day, sold mostly at shows and prone to eventual misplacement and deterioration. The Trusty Knife’s self-titled debut was released in this format in 2008; aside from a small run of 7-inch records for single “Natural Habitat,” that was it. The mists of time took over from there.

Fast-forward to 2020, when Dusty Medical Records plucked the album from near-obscurity, treated it to a Justin Perkins remastering, put it on modern streaming services, and reissued it on a vinyl LP. “Timeless pop music from one of the great overlooked bands of 2000s-era American Indie Rock,” reads the Dusty Medical description, which is spot-on.

Opener “Flash In The Pan” is the kind of knock-kneed funk that permeates the entire album. It’s a song overflowing with sly grooves, oddball instrumentation (that bassoon!) and impressionistic lyrics that read like collage poems crafted from old issues of Boy’s Life and TV Guide:

“You were my Library of Congress / My free T-shirt slogan with a golden proof of purchase,” Pieper sings on the jaunty “Stealin’.” It’s followed by a solo that combines a trumpet with a harmonica and somehow makes it sound like the most natural thing ever:

Speaking of all things natural, Pieper is in top form in the intro to “Natural Habitat.” Simultaneously sounding like a street preacher and a carnival barker, he rattles off an increasingly bizarre (and funny) list of thank-you’s before the song kicks in at the one-minute mark:

And then there’s the video for “It’s All Built In,” a 16mm creation from Killelea that looks like it could have been shot anywhere between 1978 and 2008. “Timeless” indeed:

But the Great Trusty Knife Rediscovery doesn’t end there. Earlier this month, Dusty Medical treated streaming services to not one, but two rarely heard follow-up albums. Looksongs (2009) and Cyclops (2011) find the band in a more experimental, more lo-fi mood, unabashedly leaning into influences like Captain Beefheart and early Guided By Voices. Not that there aren’t plenty of pop gems: “Old Folks,” from Looksongs, is a wild ride that perfectly synthesizes the aforementioned influences:

Cyclops opener “It Ain’t Right The Way That You Get Off” is a spiritual sequel to “Natural Habitat”:

Cyclops closer “Teenagers Are Lonely,” meanwhile, is a demented bubble-gum freak-out that lives up to its hilarious title:

It’s here that I should disclose my personal connection to The Trusty Knife. Pieper, Bachhuber, and Gourlie were/are longtime friends from Mayville, Wisconsin. The latter two were part of my old band, Holy Mary Motor Club, with Pieper filling the role as the brilliant, slightly younger upstart. In many ways, the beginning of The Trusty Knife signaled the end of my own band. I remember being a little blue about this at first, but I quickly saw it as something of a relief. “Finally,” I thought, “someone who’s actually good at this is having a go.”

I also remember a conversation I had with Zack during the making of The Trusty Knife’s self-titled LP. (I slapped together the explosion montage that opens “Natural Habitat.”) I asked him what he hoped to accomplish with his group. “I want to make music that someone will randomly discover 20 years from now and say, ‘Oh wow, what is this? This is great!'” It’s not 20 years later, exactly, but it’s close enough. Rediscover The Trusty Knife at will. It is, indeed, great.