There’s no aging out of punk, but as the years go by and the mid 30s set in, people tend to fall away into adult obligations. At the opposite end of the spectrum there’s also no age limit. The reality, though, is that legitimate options for bands under 21 are scarce. Pay Up made their mark on the local scene while the members were still in high school, playing houses and the rare all-ages show. As guitarist/vocalist Joe Samara and drummer Leo McClutchey transitioned into college life, the band (along with bassist Kevin Ramirez) changed its name to Beggar and focused its approach.

While the group is well connected, there’s still a lack of options for under-agers. The members of Beggar are not the media-hyped lazy millennials. They have a voice and they aren’t afraid to use it. In advance of their Midwest tour, Beggar gave Milwaukee Record a piece of their mind.

Milwaukee Record: Why start over with a different name and not stick with Pay Up?

Leo McClutchy: With Pay Up we hit a wall with the amount we could do as a trio. That was a big part of it. I guess it was just a natural progression to go into a four-piece hardcore band. The shit I was writing was different than what I was writing in Pay Up at the time.

Joe Samara: The Pay Up riffs were pretty basic because it was all of our first times taking on the hardcore band persona. Another big factor was how we were viewed in the scene as the new kids on the block. We were writing pretty simple stuff and we wanted to show we had more complexity with the stuff we could write.

MR: Are there any Beggar songs that come from the Pay Up time?

LM: There’s a song called “Vicious” that I demoed by myself. “Scum,” that’s another one. I demoed “Vicious” and “Scum” by myself during Pay Up.

JS: We decided as soon as he wrote those that it wasn’t going to be Pay Up stuff.

MR: Do you approach the writing differently or is it just the natural progression that makes it different?

JS: When we would write Pay Up stuff, we would write a riff and sort of mesh it in with a bunch of other stuff. I think with Beggar, we’ll write a riff and think about how we can make it more interesting and incorporate other ideas that hardcore bands have done before. We also took note of things with Pay Up and warped that as well.

LM: We definitely put more time into what we’re writing.

MR: Do you think Beggar is more serious than Pay Up?

JS: I would be sweaty and shit after a Pay Up show and I’d be able to talk to people. I’m in a mental and physical mind state after a Beggar set that I don’t want to talk to anyone or do anything else except go outside and spit up blood.

LM: I can just tell I’m pushing myself more in what I’m playing than I was before.

MR: Are there any influences that come into Beggar that weren’t there during Pay Up?

LM: There was an ’80s hardcore influence to Pay Up, but it’s definitely coming out a lot more for Beggar. When Pay Up started, that’s when I first got into hardcore, collecting records and whatnot. It’s what I listen to the most. I just spend my time searching through the internet for obscure hardcore bands that I’ve never heard of before. That’s definitely gone into Beggar a lot.

MR: Do you think the scene has gotten better for younger people? Are more kids going to shows?

JS: I don’t know where they’re coming from or finding out about these shows, but I am seeing a lot more younger dudes coming out.

LM: There’s more people coming out and they’ll have a good time and tell their friends about it.

KR: It’s also that there are more kids in these types of bands. They tell their friends to come to their shows.

JS: The first kids I saw at our shows near our age was when Slush played. I’ve seen those kids at more shows, and buddies of those guys come out to shows. It’s cool how the network is expanding more because those kids just want to have a creative outlet and someplace where their parents don’t know where they are and they can be little shit heads and do whatever they want.

We’ve been seeing articles pop up that Milwaukee is a scene with no all-ages venues. It’s super shitty. Legislations and the administrations and the things they do keep the opportunities from happening. It stifles the creativity and the musical hub that Milwaukee really could be.

KR: In my opinion, Milwaukee could be as big as Austin if there weren’t so many restrictive venues. Easily.

JS: If it hadn’t been for a couple of cool dudes that caught on, and us emailing other bands and asking to play with them, we might not have had the opportunity to.

LM: It’s ridiculous. I think we need to actuate the change of those ridiculous fucking laws.

MR: What mistakes did you make in the past that you will avoid with Beggar?

JS: For me, selling ourselves short with the notion that anything we’re doing with the music is a joke or not serious.

KR: With Pay Up, everyone thought of us as the new kids on the block. That aspect of not being taken seriously.

LM: I think it can be difficult in a scene such as Milwaukee where you don’t have many all-ages spaces and you’re usually playing to people five to 10 years older than you, sometimes more. I guess just take this project more seriously. It’s not that we didn’t take Pay Up seriously, but there’s definitely room to improve. We want to really focus on what we’re putting out, how we’re putting it out, that kind of thing. 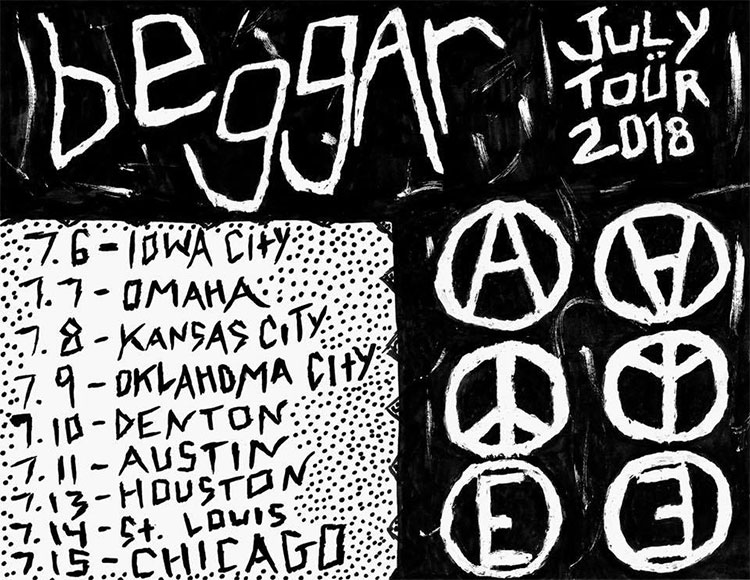