It isn’t unnatural for a musician to take some time off between projects. Sometimes it takes somebody whose band just ended a little while to realign their creative focus and to get that itch to take the stage with a new band. It took Bobby Flowers close to 15 years. After Carolina called it quits around 2004, Flowers—the band’s front man—put music in the back seat to focus on other aspirations and life milestones. However, seeing some friends and Milwaukee music counterparts playing when he was at South By Southwest in 2013 stoked the creative flames and brought him back to performing.

Following semi-regular solo outings, Flowers set out to start a full-fledged band. With Carolina collaborator Dan Hinz (Maritime, The Benjamins) alongside him, the duo started talking about a project with two former members of The Championship in August. They had their first practices in September. On Friday, Flowers’ lengthy hiatus will officially end when Hello, Face plays its first show at Tonic Tavern. Before Hello, Face’s debut, Milwaukee Record asked Flowers about what prompted his return to the stage, how his approach differs from his time in Carolina, and what we’re to expect from this all-star band.

MR: After so many years of not being in a band after Carolina broke up, when did you decide you really wanted to go for it again?

BF: I started to get the itch a few years ago. My wife and I went down to South By Southwest the same year they had that Milwaukee showcase. I think it was just seeing all these friends that I still had in the scene—even though I hadn’t been a part of the music scene for so long—do this, it made me think “I can still do this. Why am I not doing this?” That just inspired me to get back into it.

Initially, putting a band together seemed like a daunting task, and I have a career now, so I thought I would just stand in the way of others schedule-wise. The initial idea was just to write some songs and play shows alone and possibly take those songs into the studio and call upon friends I had and grew up with in this scene to play. I’m inspired by Eric & Magill and on their first record. They kind of did that. It was kind of taking a play out of their playbook to have so and so play drums on a track and so and so play guitar on a track to create a different sound for each song. That sounded like a good idea to me. Then Maritime went on this hiatus and Dan and I got back together playing some of these songs. Dan’s a guitar player and aside from his children, guitar is the love of his life, so I knew we were probably going to have to put a band together.

MR: And I’m sure there’s a lot more to the recruitment of a band opposed to getting some guys to take a weekend out of their life to record a song or two. It’s a mixture of what they offer in terms of their musicianship and their own personality, so what was the process of filling out an entire band like?

BF: Dan and I have always had a really strong connection musically. There’s really no one I’d rather play with than him. It had just worked out that Dan had run into Jordan [Burich], who’d mentioned that he’d been away from bands for a long time, since he was the guitar player with The Championship. He said he was really digging playing bass lately, so we started talking to Jordan, and Jordan, of course, mentioned Travis [Doar], The Championship’s drummer. So we brought those guys in and I could immediately see the same sort of dynamic between those two guys that I feel with Dan. Once that was obvious, I knew it was going to move in a good direction.

MR: Did they just add some meat to the bones of your existing song ideas or did they step in right away and start writing with you organically?

BF: So I’d spent a little bit of spring and summer acclimating Dan to these songs I’d been writing, then with bringing in the rhythm section and forming a new band, it was acclimating them. I think it made it easier that Dan and I already worked on these songs, but it starts with getting a feel for the song, then they can take it where they want.

MR: Were you surprised with where the songs went? Did you expect your sound would land where it did, or did their implementation help bring it to new and unexpected places?

BF:  I want to say that they pretty much exceeded my expectations right away. I was immediately impressed with how they were reacting to the songs and how quickly they were able to get things down and, from there, build off that. 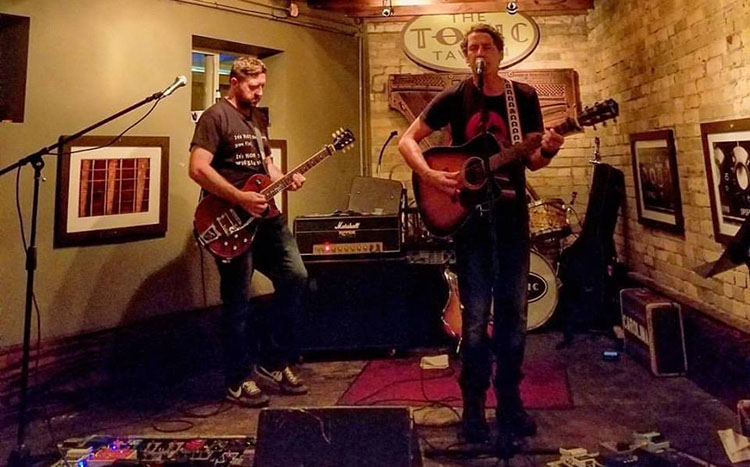 MR: So where did they take it? I know the “What does your band sound like?” question is the worst, but where does this combination of musicians from Carolina, Maritime, and The Championship land sonically? Is there any commonality between this band and any of those?


BF: I think we draw from different inspirations with each song. I think a lot of that has to do with Dan interpreting the song and what kind of guitar sound he wanted because he just has a big background musically that he can play classic rock guitar, more shoegaze-y stuff, stuff with elements of blues, and he just has such a big sound. He’s always creating a different kind of sound for each song and making it fit what that song needs. I really think it starts there and that’s going to be the sound you hear the most.

MR: If my math isn’t wrong, it’s been more than 15 years since you last started a band. The music industry, the local music climate, where people play, and the way people listen to music has almost completely changed. So what are some differences you’re noticing this time around?

BF: It’s a lot easier, right? It’s the difference between growing up without a cellphone and now having a smartphone. You don’t necessarily have to go out and flyer or promote yourself without leaving the house. You can get the word out from your couch.

MR: As music and promotion have changed, you’ve also changed and grown up. How do you feel like your approach with this band differs from what you wanted with Carolina?

BF: It’s much more relaxed. We can just have fun with it. I think we all still aspire to grow and become better musically. I really hope that comes across with this project. I know I’ve put a lot more thought into my writing than ever before, and I think there is still a lot to prove. The nice thing at this stage is that I’m only really trying to prove it to myself that I can do what I saw my friends doing at South By Southwest and get back in on the fun.

Hello, Face will make their debut at Tonic Tavern on Friday, December 22. The new band will play in support of  Dramatic Lovers and Rx Drugs. Jayk will open. The show is free, but all donations collected will be given to Hunger Task Force.