In a city as relatively small as Milwaukee, certain people, places, or things can get saddled with bad reputations. Even if these reputations are somewhat deserved, Milwaukee Record strives to look past the negatives and focus on the positives. In the latest installment of In Defense Of, we make a case for that big orange sunburst thing at the end of Wisconsin Avenue.

Google the words “the calling milwaukee” (or “big orange sunburst thing milwaukee”) and you’ll find decades’ worth of pissing and moaning about the sculpture. “The Calling” was designed by celebrated artist Mark di Suvero in the early 1980s, and was installed in O’Donnell Park, at the terminus of Wisconsin Avenue, in early 1982. Forty-feet tall and made from steel I-beams painted orange, it came pre-loaded with controversy: Was the sculpture really designed for Milwaukee, or was di Suvero dumping an existing piece, originally intended for New York, on a bunch of flyover-country suckers? Was it truly “site-specific,” or was it actually meant for 3rd and Wisconsin, outside the blue federal building, where its color and scale would be better appreciated? Yes, the sculpture was commissioned by MAM, but why was it paid for by an anonymous donor? (The price tag was said to be around $150,000, or roughly $390,000 in 2017.) Also, why was it just a bunch of orange I-beams?

A second round of hand-wringing came in 2001 with the construction of MAM’s Calatrava addition. “Hey!” Milwaukee cried. “That big orange sunburst thing is blocking our new white winged thing! Move it!” But hold on a minute: Did Santiago Calatrava design his MAM addition with “The Calling” in mind? Was it all part of the plan, or was he simply being diplomatic when he deferred to di Suvero any time talk of moving “The Calling” bubbled up? Also, why was it just a bunch of orange I-beams? 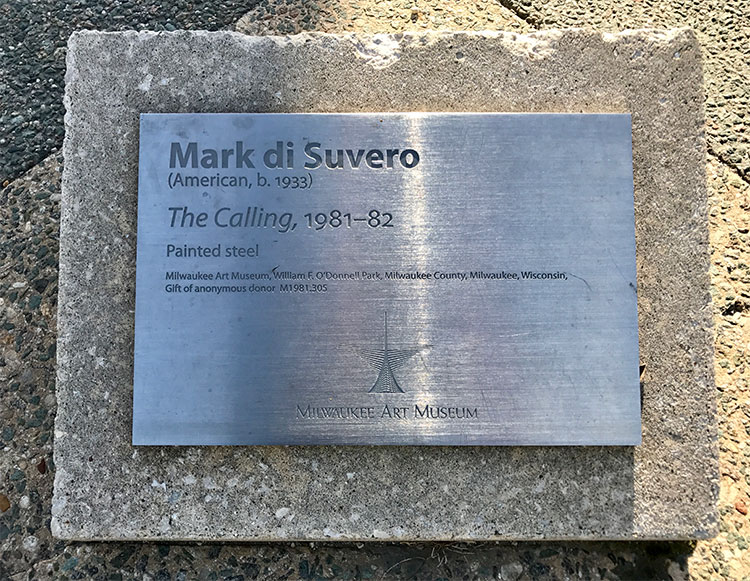 The good rap: Look, we’re not going to suggest that moving “The Calling” wouldn’t create a cleaner, more dramatic, more elegant view down Wisconsin Avenue. And we’re certainly not going to go to bat for the thing’s artistic merits (big orange I-beams unwittingly dwarfed by a vast backdrop!) But if there has ever been a better example of the oft-comical duality of Milwaukee—industrial city of the past versus imagined cosmopolitan city of the future—we haven’t seen it.

Let’s be honest: Isn’t there something adorably Milwaukee about having an old, outdated thing blocking a new, world-class thing? The Calatrava is iconic and modern as they come, but of course there’s a big orange sunburst thing standing between it and the main artery of downtown. The city may be aspiring to be a winged force of nature cutting through the clear blue sky of the 21st century, but try as it might it can’t escape its ugly, industrial, garishly colored past. That’s Milwaukee for you!

And you know what? Good. Because that push-and-pull is Milwaukee. And then there’s this: Although a big deal in its day, “The Calling” is now practically Milwaukee kitsch. It’s Laverne and Shirley, the Bronze Fonz, the way we say “bubbler” instead of “water fountain.” It’s one of those dopey OnMilwaukee emojis, for Christ’s sake. Like the similarly embattled city flag, it’s who we are, for better or worse, warts (and/or rivets) and all. Shunning it would be chipping away at of our already flaking identity.

Does di Suvero’s “The Calling” muck up Calatrava’s wings? Sure. But taken together they create an entirely new piece that neither artist could have anticipated. Call it the battle between past and future. Call it the growing pains of a city searching for itself in unfamiliar times. Call it a big orange sunburst thing. Call it “Milwaukee.”