Milwaukee, known to be a quiet, sober city, turned out Wednesday night in remarkably modest fashion. Jeff Tweedy chose Milwaukee to kick off his current solo tour, and the Pabst Theater was one of the few dates that didn’t sell out. The Wilco frontman, alone onstage with his guitar, gently encouraged the crowd to sing along, yet even old standbys like “Hummingbird” and “Jesus, Etc.” failed to elicit more than a murmur. Tweedy has played Milwaukee at nearly every opportunity, and he’s never been one to shy away from engaging with hecklers and overzealous fanatics; reserved politeness, though, seemed to take him by surprise.

Tweedy’s banter, on the other hand, did have the crowd roaring throughout the night, and he even hinted at one of the factors working against any potential rousing singalongs. “Been traveling around a bit, playing by myself like this,” he told us. “Playing a lot of outdoor festivals in the middle of the day, and…my songs aren’t for that?” Wilco fans already know to seek the humor in Tweedy’s maudlin poetry; as oppressive as the pathos and cynicism might sometimes be, Tweedy always finds a way to crack the tension. “I’m staring into the abyss, literally,” he says, and everyone laughs.

Anyone hoping for an unplugged greatest-hits show was probably a bit disappointed. Tweedy trotted out at least four unreleased new songs, beginning with opener “Bombs Above,” one of the more disarming lyrical pieces he’s written in years. Scruffy, clad in military green, he could’ve been a protest singer straight out of the ’60s, a role he’s not been known to attempt. There was no wry humor in this song; it was an unabashed expression of personal regret about not doing more to save the world. It should’ve been clear at that moment that Tweedy is on a mission not to mince words with this new batch of material. He’s never shied away from politics, but he rarely spells things out so explicitly in song.

Another highlight of the show was a new song with the working title “New Wave Theater,” a rambling love song within a missive about life in the public eye. “Now people say / What drugs did you take / And why don’t you start taking them again,” he sang. It sounded like a line more likely to come out in an interview than a song. “And if I was dead / What difference would it ever make to them / If I got high from time to time?”

Tweedy went on for a good 10 minutes indulging the crowd’s whims by way of introducing a new song called “Noah’s Flood (Let’s Go Rain Again).” Asked about his hat (Connecticut Tigers merch), he explained that he only wears minor-league caps nowadays. He recounted getting a gift of a baseball cap after throwing out a first pitch at Miller Park (April 13, 2009), and being accosted on a leisurely stroll in Chicago: “This guy runs by with his dog, and then he turns around and stops behind me, and he goes, ‘Brewers? You gotta be fucking kidding me.'”

Although Tweedy has curiously shied away from playing anything off his 2014 Sukierae album (released mononymously as a duo with his son) on his solo tours, he touched on most of his other projects Wednesday night. The Uncle Tupelo tunes “New Madrid” and “Acuff-Rose” got strong responses from the crowd, as did “Lost Love” from his Golden Smog days, which also appeared in this stripped-down format on his 2017 solo album Together At Last. There were a few deeper cuts from the Wilco catalog as well. “Art Of Almost” was played by request, though Tweedy abandoned it after a couple minutes, lacking a band to play the frenzied jam that normally concludes it. The Sky Blue Sky nugget “On And On And On” was a bit of a surprise as well, as well as the lengthy “One Sunday Morning,” but more recent albums Schmilco and Star Wars were neglected entirely.

After the onslaught of storytelling and new songs, the finale seemed almost quaint. The crowd received “Misunderstood” and “California Stars” and “A Shot In The Arm” graciously, but the new “Don’t Forget We All Think About Dying” probably got just as enthusiastic a response. (“Don’t let it kill ya,” goes the refrain.) Wilco is a powerful live band, but it was refreshing to see that Tweedy’s words are still the focus, and that at age 51, he’s still got the gift for putting them together. 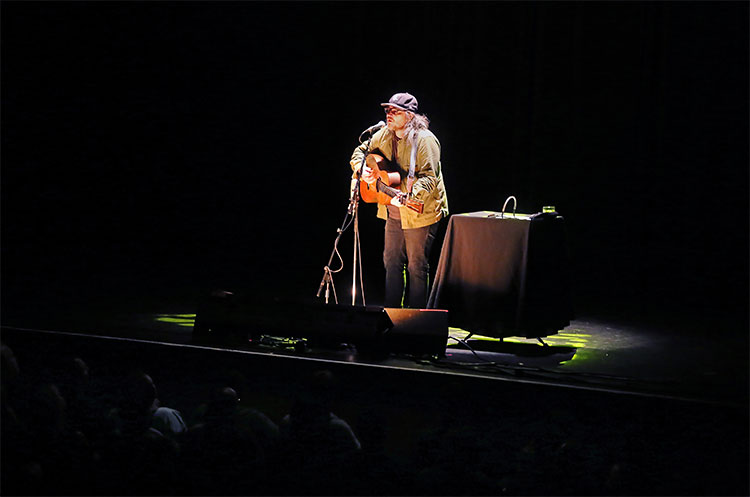