The title of Hughes Family Band‘s debut full-length, One Last Night With Nathan Hughes, is a somber hat-tip to its tragic backstory. Nathan Hughes, the band’s co-founder and one half of its namesake (joining brother Ian), died in August 2021. Though the group was only a few years old and had released only a handful of singles, it had already established itself as a rollicking, good-time honky-tonk country band of the highest order. A gnawing thought of what could have been hung in the air following Nathan’s untimely departure.

Now, just over a year later, comes One Last Night, recorded between November 2019 and March 2021. It’s difficult to separate these 11 songs from their melancholy aftermath, yet it’s hard to imagine an album more joyous, more giddy, more fun, more alive. It may be the last night, but it’s one hell of a sendoff.

“Off The Line” and “Golden Light” represent the record’s irresistible one-two opening punch—the former written by Nathan, the latter by Ian, both sung by Connor LaMue. Warm, funny, and filled with shots of piano and sax, these dive-bar rave-ups practically leave a cloud of gravel-parking-lot dust in their wake. Later, LaMue takes center stage on some crowd-pleasing highlights: The crying-in-my-beer “One Hundred Tears” begs to be crooned by a chorus of belly-up barflies at 2 a.m., while the boot-scootin’ and wickedly catchy “Sliver Of Time” contains some winking and wickedly sharp lyrics. (Chorus: “I ain’t reading any letters / I’m not even checking the mail / But in the sliver of time between when my bender ends and starts again / I just gotta keep you off my mind.”) “Something To Take Your Place,” meanwhile, could be the perfect soundtrack to the world’s most good-natured bar brawl.

Nathan Hughes himself takes both writing and singing duties on the delightfully jittery “Shake It” (props to ace dummer Bryce Kedrowicz for the caffeinated pace), as well as the hilarious and slick-as-shit “Jackie” (“In the city they got pretty women / And all these pretty women wanna give me little children”) and the Dylan Self Portrait-esque (in a good way!) “Heart Of The Valley.” “Come on, Ian,” Nathan says before his brother takes the guitar solo on the latter song. It’s one of the album’s most bittersweet moments, though one quickly supplanted by the buoyant and feel-good vibes of the Ian-penned-and-sung “Mother Of Mine.”

The “Family” part of Hughes Family Band doesn’t just cover the Brothers Hughes—an eclectic cast of characters populates One Last Night. Local heavy hitters like Johanna Rose, Steph Lippert, and Kyle Urban all contribute background vocals, while other musicians chip in horns (William Akers, Nolan Thomas, Brett Westphal) and pedal steel (Colin Sweeney, Ryley Crowe, LeRoy Deuster). The record’s final track, “Shake It (Hootenanny Reprise)” is a celebration of that extended family. A back-room, after-hours shout-along, the song comes and goes in just one minute, but it leaves an indelible mark. Everyone is glad to be there. You want to be there.

On any other album, the “Shake It” reprise might play like a tossed-off alternate take; here, it’s a joyous, boisterous, and united shout to the heavens. Rest assured the heavens are listening.

Pre-order a vinyl copy of One Last Night With Nathan Hughes from Good Land Records HERE. 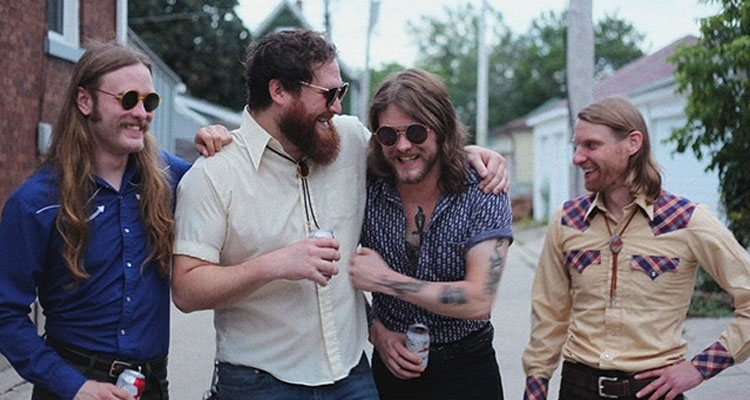 • Do the “Pierce Street Boogaloo” with the Hughes Family Band