With a voice like South Milwaukee’s favorite son, Reginald “The Crusher” Lisowski, and wrestling singlets in tow, Florida Brothers Band craft poppy punk earworms that will make you smash your neighbor with a steel chair. “We’re dumb. Don’t waste your time,” says vocalist Chris Loker. “[Our show] is only fifteen minutes, though, so you could do worse.” In preparation for the band’s April 28 show at Circle A, Milwaukee Record talked with Loker about the pinnacle of sports entertainment: professional wrestling.

Milwaukee Record: Let’s start off with a heavy-hitter. Who is the greatest wrestler of all time?

Chris Loker: I’m going to say Arn Anderson, because consistently across the board, he could make anyone look good and he can also make himself over. But he knows how to make sure everyone looks great in the match. He can make the greatest promo. He’s spot on. He’s that scary uncle that you’re weirded out by, but you respect him, and he’s going to whoop your ass if you’re a little bastard. And then he knows how to take a whooping and make it look like he’s yellow as all hell, y’know.

MR: With the present state of wrestling and the waves it’s gone through in your lifetime, where do you think it’s at?

CL: I think it’s really great right now. There are so many different kinds of wrestling going on. There are so many different options with streaming and YouTube, the WWE Network. I have two streaming services from Japan alone that I consistently watch. Germany has their own wrestling company. England’s very big. India does a lot of stuff, too. It’s very odd. Remember the wrestler The Great Khali? He has his own wrestling school in India. Across the world, there is so much going on. It’s amazing what you can see now compared to what you couldn’t see—with the tapes from old times, being on different television networks in town, and then maybe them getting taped over.

MR: With my disconnect from wrestling over the years, it seemed that all of a sudden WWE kind of swallowed everything. So it didn’t completely kill everything like I’d thought?

MR: What’s your favorite era of wrestling, or favorite league?

CL: Seventies and eighties Memphis. Eddie Gilbert, Jerry “The King” Lawler, all those guys. Doug Gilbert, The Fabulous Ones—Steve Keirn and Stan Lane, just some of those great promos. Jimmy Hart. Everybody down there incorporating rock and roll and just the campiness of it all, just knowing how to have a good time. Great brawls. Wind-up punches and fireballs and everything. It’s the right amount of fun.

MR: That’s the prime time for me. You didn’t have to be some huge buff dude. You could just be some fat-ass Elvis impersonator.

CL: Totally. You could just be someone’s dad. You’re baby steps from just being a drunk at the bar. And you probably were the drunk at the bar, too. Memphis, those guys ran the city, you know what I mean? Everybody loved them anywhere they’d go. You hear the stories. Elvis coming around just wanting to see the wrestlers and wanting to hang out with them.

MR: Was there more than one Ultimate Warrior?

CL: No, there was only one Warrior.

MR: I’m so glad that you said that because I’ve had many arguments over the years—people saying it was a different guy.

MR: Yeah, he got bigger and he got highlights in his hair. That’s all that really changed.

CL: They’re probably confusing him with that Renegade guy who was working for WCW who kinda looked like him. WCW really tried to ape the eighties WWF guys. Bringing in all the guys Hogan used to wrestle. Bringing in Earthquake John Tenta as The Shark, and hell, bringing in Brutus Beefcake as The Zodiac. It’s like if you combined The Missing Link—the wrestler—with a zebra. It was awful. It was a really weird time for WCW back then.

CL: Concession Stand Brawl. They take the fight out to the concession stand. It’s great watching them hit each other with containers of mustard and it’s spilling everywhere. Popcorn and everything flying. Drinks getting thrown at each other. It’s a food fight and a hardcore match at the same time. Eddie Gilbert and Lawler and all those guys down [in Memphis] did it so wonderfully and they didn’t overdo it in any city, though the one that was always known was Tupelo, Mississippi. It happened a few times with different tag teams. It’s a nice way to get out of the ring and get crazy.

MR: Whenever they took it out of the ring and into the fans, it was always good.

CL: It makes you want to be there and be around that. That’s why hardcore wrestling, it’s not hugely prevalent, but it’s still around for a reason. Everybody can be a part of it.

CL: To follow the classic line of  “You hurt the ones you love the most,” we’d want Doubletruck in a War Games cage match. Them boys are small enough for me to bench press them into the cage. We’d win by them Doubletruck boys tapping out to [FBB bassist] Nate [Metcalf]’s death cry, or I’d crush [Doubletruck bassist] Zach [Lewis]’s spine with a camel clutch.   Now, I’ll tell you who we wouldn’t want to face–Soup Moat in a street fight. Them boys match up to us way too well. And there’s nothing that the Florida Brothers hate more than a fair fight. It’d really come down to a battle of the super heavyweights, though. [Soup Moat bassist] Frankie [Knaebe]’s a behemoth to behold. Now just imagine him wielding a spiked baseball bat. No thanks. 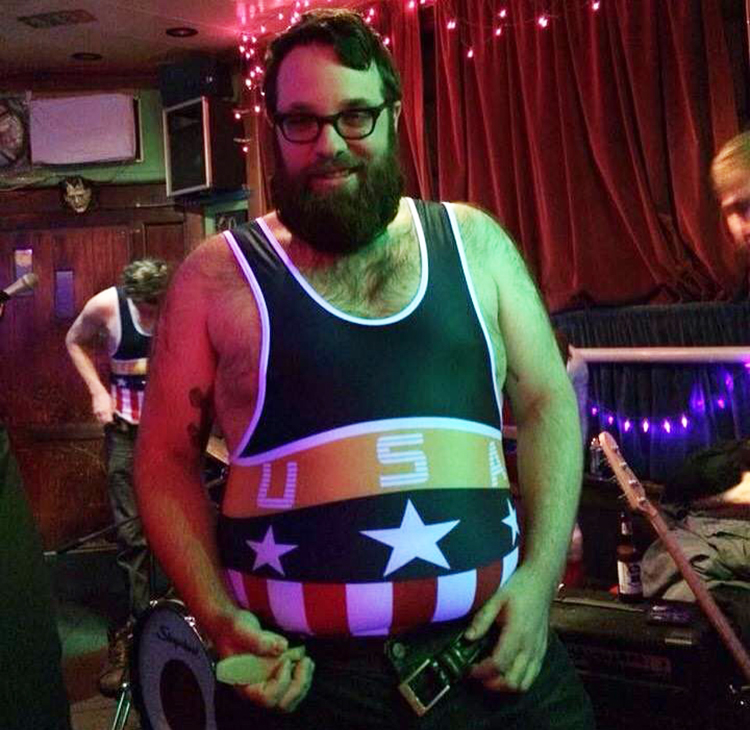