Riles Walsh flips through sheets of poster-sized paper composed of handmade symbols, blown up 16 times his original scribbles in black on white. These symbols seem familiar—perhaps from one of those expensive calculators or from a scrawl on the ruins in that one picture of Greece hanging at Oakland Gyros. Then, with the sheets fanned out on a kitchen chair, Walsh outlines his unusual plans for the symbols as musician’s cues played onto a video screen in a sort of reverse symphonic performance where you “end up having the film compose the music.”

Walsh, 31, is a signature composer and sweet dreamer among an emerging sect of talents who play as part of DIY Chamber Music. This is Milwaukee’s new classical music, or New Music, or Contemporary Music, or whatever category works for sheet music that’s played by strings, woodwinds, horns, and sometimes those really cool blocks hit with lil’ mallets. Including a show this Saturday, December 10 at the West End Conservatory, Walsh and DIY Chamber Music are taking back a musical form that ruled for hundreds of years, and bringing it to places where you can dress normally, drink, hoot, maybe holler, and experience musical unknowns.

“Modernity doesn’t have to end it. We can use technology and new tools to augment the form. That’s really what I’m trying to move forward to,” Walsh says. 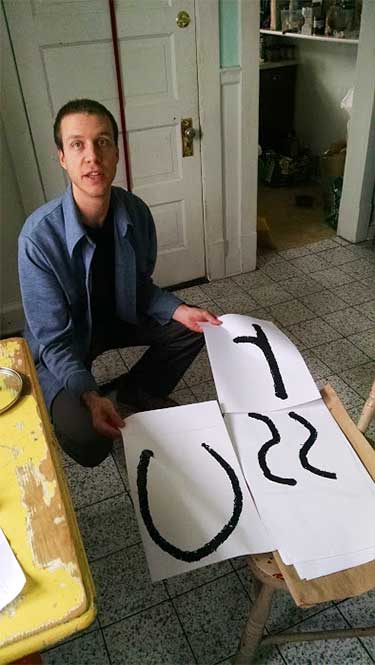 Frankly, the local DIY Chamber Music players seem much more excited about what’s next. Joshua Backes, 39, co-founder and occasional player in DIY Chamber Music, is short on specificity with what he feels makes up Milwaukee’s contributions to new classical (not to be confused with Nü Classical, a non-existent but likely unfortunate sub-sub-genre). At this beginning stage, it seems like the how behind it all will happen, as long as there continues to be folks asking “why not?”

“I think we want what any composer and performer wants, to bring an audience on a certain ride with them,” Backes says in an email. “Our ride tends to be quieter and not in a key. We devise new systems from which to draw music out of. I’d like to hear more musicians avoid using traditional keys. It’s soooo 1800s!”

Walsh explains it with deconstructionist flare, slightly surprising for a guy who’s obsessed with the Beatles and who, through his day job, recently led a children’s piano recital of the music of Louis Armstrong.

“The main arc of this idea…was putting composed music into bars. Putting it into venues that wouldn’t see it. Getting rid of this Ticketmaster, row A, seat 8, corporate thing that classical music exists in. Let’s open it up and make it less formal. And at the same time, allowing people who become uncomfortable by those [traditional] settings to experience this music. To even allow people to think…the thoughts around this type of performance like, ‘Why’s there a guy in front waving his arms around?’ or ‘Why are the musicians staring at the paper?'”

As much as it’s engaging for the players in the DIY Chamber Music’s various acts to perform in these semi-regular events, there’s also a worthwhile challenge to the audience. One chamber set at Riverwest’s Company Brewing involved a one-off ensemble dotting through an episodic score to the 1915 silent version of Alice In Wonderland. At another, in Walker’s Point at VAR Gallery, an ensemble with a Star Wars reference in their name worked through moody numbers, with the earnest reaching and pushing that comes from any group playing together for the first time. In a separate performance, Walsh placed oversized index cards containing chunks of musical direction on them, in some shuffled order, on the music stands of seven musicians. In between, he conducted and gently manipulated a four-track cassette piping in soundscapes.

Artsy, flouncy, odd. Sure, you could shovel digs their way, but there is little doubt they provide original performances of the unexpected, a rarity in local live music. Especially contrasted with the polish and practice (ahem, rehearsal) of chamber music or symphonies, the DIY Chamber sets have been gritty. This isn’t the music of the dentist’s chair or the end credits. Talented, vigorous players who bring the audience into the act of revealing what a song—really, an entire type of music—can be. It feels downright normal to keep your coat on, drink a Hamm’s, and vocalize emotional interest in the susurrations and swells from violinists playing in street clothes.

For this Saturday’s show, there are three sections on the (Facebook) program: Walsh will revisit a lightly revised and self-created (down to the sheet music) piece, “New Earth,” with musicians new and old; Brendan Fox will present a duo for trumpet and trombone; and a third set of pieces will involve clarinet “and electronics.”

It’s a step forward in a chamber series Backes says he’d like to see double in performances by next summer. To support this growing scene—now at a few dozen players and composers—Backes says he’d like to figure out a way to pay everyone more from performances. There’s also the potential to find more of those players who can dedicate the hours of group and independent rehearsal on top of life in general and better-paying classical gigs (weddings included). Otherwise, in the next few years, Backes says “if possible, [I’d like to] begin recording our favorite pieces and maybe play in different cities. I personally would love to collaborate with hip-hop artists or put something together with my rock friends. I have some pipe dreams that I suspect we can pull off.”

As for Walsh, DIY Chamber Music is the classical counterpart to his baroque-pop group Wavy V, and the middle C to his side-note of unstructured sessions with numerous other players. Following this week’s performance, his DIY Chamber Music focus will shift to those sheets of hand-drawn symbols, integral to a musical piece held together by a complicated configuration of software, videography, and musical decryption. Not easy, but, if it’s like his other pieces, still accessible to most anyone who wants to listen. He shapes creativity like a storm chaser, all prepped to drive straight into uncertainty.

(Full disclosure: Walsh as a musician has become a friend because, mathematically speaking, every musician in Milwaukee has a 73% chance of playing a show together after just four active years. For further journalistic integrity, which seems to be in such short supply these days, it should be noted that he plied me with delicious cauliflower in yellow curry during our interview.) 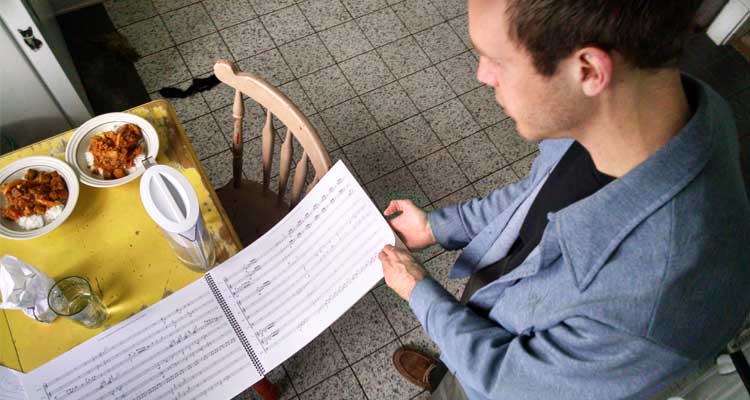