Among its many oddities—beer, the Bronze Fonz, Bob Uecker—Milwaukee is home to the world’s first museum diorama. In 1890, Carl Akeley, a.k.a. the “father of modern taxidermy,” created a muskrat colony diorama for the then-young Milwaukee Public Museum. The exhibit still stands today, just one of dozens of meticulously crafted, delightfully retro miniature models in the museum’s permanent collection.

Inspired in part by this strange claim to fame, Danelle “D” Kirschling recently founded National Diorama Month, an only-slightly tongue-in-cheek celebration of the crafty and adorable art form. On Tuesday, March 29 at Blackbird Bar, that celebration comes to a close with the city’s first “Diorama-Rama.” The event will feature a friendly competition between local dioramists (there’s still time to enter), celebrity judges, oodles of prizes, and more. Before the shoe box-sized gauntlet gets thrown on the 29th, Milwaukee Record chatted with Kirschling about dioramas, her love for dioramas, and dioramas.

Milwaukee Record: Before we begin, it should be noted that this is being billed not just as a Milwaukee thing—this is National Diorama Month. What made you decide to go so big right out of the gate?

Danelle Kirschling: Well, Regional Diorama Month just didn’t have the same ring to it, I suppose. [laughs] It’s starting here, but I’m sure it’s going to snowball, and I expect there will be an International Diorama Month in a year from now. [laughs]

MR: Any particular reason why you’re starting it in March?

DK: It’s kind of the end of winter, and not quite spring. It just seemed like a good month to get…I actually started it about five years ago and I have been celebrating it on my own. This is my first year I’m expanding it and including people nationally.

MR: What inspired it five years ago? What was it about dioramas that spoke to you?

MR: So this is something you and your friends did every year?

DK: Um, no. [laughs] I wish I could include my friends! It was just me! [laughs] So this is the first year somebody else besides me will be building a diorama for National Diorama Month. [laughs]

MR: Well, it seems to have gotten people interested. Do you have a lot of entries from other folks?

DK: I do! I have at least fifteen entries, which for me is a lot, considering I just made the announcement [two weeks ago] that we were doing this. I’m really excited. We have a lot of people who are going to be entering. I also have a couple of people who already have dioramas that don’t quite fit the theme of the Diorama-Rama, which is “Milwaukee.” So they’re just going to be showing their dioramas in a non-competitive capacity. 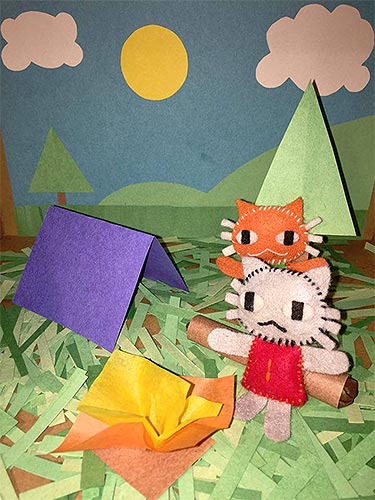 MR: Oh, I didn’t know there was a specific theme.

DK: The theme for the contest itself is “Milwaukee,” and that’s really the only rule. As long as the diorama is even tangentially related to Milwaukee, we’ll be in business.

MR: So there are no other rules or guidelines? Do you have to use a shoe box?

DK: No, you don’t have to. I prefer a shoe box, personally, for my own creations. I’m a traditionalist in that way, I suppose. I often use little figurines and stuff I find around the house to add to the scene, and sometimes the dioramas are inspired by something I’ve had in my house. I had a dollhouse when I was a kid and I remember making a pioneer-themed diorama for school that used some of the furniture. But no, as long as it fits in the door, you can do whatever you want. It’s totally cool.

MR: Have you seen some of the entries already?

DK: A couple of people have told me, but I like to keep it a surprise for myself. People have asked questions about whether or not their ideas are going to be appropriate, or if the materials they’re using are sanctioned by National Diorama Month. [laughs] So I kind of have an idea what a few of them will be, but other than that I’m pretty clueless.

DK: I’ve volunteered with both of them. Underdog is from Madison and Milwaukee Pets Alive is obviously here in Milwaukee. It was hard to think of fundraising ideas that would be related to dioramas. [laughs] So it’s actually like a pet supply drive. Obviously we’ll take money donations, but you’ll have the opportunity to purchase pet supplies to donate. We’re partnered with Mac’s PET DEPOT Barkery. You’ll also get the opportunity to vote for the diorama you would like to win some prizes. The more you donate the more you can vote. There’ll be prizes from Brenner Brewing, Lilou Micro Spa, Stone Creek Coffee, Bullseye Records, Bay View Printing Co., and more.

MR: What else can we expect from the night at Blackbird?

DK: Well, we’re going to have a great time. We’ll have a DJ there. We’re going to have some fun, hang out, and look at some dioramas. I’m going to bring lots of snacks. We’ll have three featured dioramists who are not competing in the Diorama-Rama and who will be showing work. You’ll be able to speak with other local dioramists, and just become really enthusiastic about dioramas. I’m looking to share the love of dioramas!

Diorama-Rama will take over Blackbird Bar Tuesday, March 29. The free-to-attend event begins at 7 p.m. and ends, according to Kirschling, “when I get tired.”