Not all brand collaborations make sense at first glance. Like Lil Wayne x American Eagle, Cheetos x Forever 21, and Susan G. Komen x KFC before them, the latest collaboration between e.l.f. Cosmetics and fast-food chain Chipotle is a bit of a head-scratching pairing. But today, the brands launched a makeup collection featuring four products inspired by Chipotle’s most popular ingredients—and the kicker? It’s actually pretty awesome.

This…makes sense? The makeup line is inspired by Chipotle ingredients, because…sure, why not? And because Trixie and Kim Chi also have their own line of makeup and enjoy eating food, fine, go ahead…give ’em a burrito bowl. It hurts no one and is an oddly delightful pairing. But why stop there? Now that the burrito bowl barrier has been smashed, why not pair some other beloved Drag Race queens with famous fast food menu items. In honor of the new Trixie/Kim Chi Chipotle offering, here are 13 more fast food menu items paired with popular RuPaul’s Drag Race contestants.

Shangela Laquifa Wadley: The McRib – McDonald’s
You never know when Shangela is lurking around the corner, ready to return. After being the first to be eliminated in season 2, Shangela was brought back as a contestant in season 3, placing sixth. In season 4, she made a brief gag appearance to the surprise—and horror—of the competing queens, but was immediately shuffled away by the Pit Crew and sent home. Shangela once again graced the Werk Room on All Stars 3, proving herself as the one to beat, but was eliminated by her fellow queens, paving the way to Trixie Mattel’s eventual crown. This reintroduction into the zeitgeist clearly has only one equal: McDonald’s curiously saucy pressed-meat concoction, The McRib, which, when returning to the menu every handful of years, leads eaters to exclaim either “Halleloo!” or “I am what? Sick(-ening)!”

Ginger Minj: Egg McMuffin – McDonald’s
On episode 9 of season 7, self-described “glamor toad” Ginger Minj, along with partner Trixie Mattel, shone in a musical parody where she portrayed egg lady Edith Massey from John Waters’ 1972 film Pink Flamingos. Ginger’s performance in “Eggs” led to a challenge win, and now, has earned her the right to claim this breakfast-menu masterwork as her own. When it comes to both Ginger Minj and the Egg McMuffin, one thing holds true: They’re both “neat, petite, and ready to eat.”

Alaska Thunderfuck: Iced Lemon Loaf – Starbucks
On episode 3 of season 5, Alaska teamed up with Lineysha Sparx on a mini challenge to create a rough-and-tumble, life-sized beauty pageant doll named Lil’ Poundcake. Their creation won the challenge and Lil’ Poundcake became an instant hit with fans. When Alaska returned for All Stars 2, she brought Lil’ Poundcake back to the runway by dressing as the potty-mouthed pageant queen she had created three years prior (and currently sells an actual doll version of online). Meanwhile, Starbucks’ “lil’ poundcake” is a slim slice of tender, lemony pound cake that’s just a little sour, but mostly sweet—a satisfying finish for any meal…much like Alaska’s rise to win the crown on All Stars 2.

Roxxxy Andrews: Big Mac – McDonald’s
This “thick and juicy” member of season 5’s RoLaskaTox clique is known for her enviable sewing skills and confrontational attitude—but also as the queen of runway reveals and iconic lip syncs. She cemented her status as a lip-sync assassin on episode 7 when eliminating fan favorite Alyssa Edwards to Willow Smith’s “Whip Your Hair,” wherein she snatched off her flowing wig only to reveal a second wig underneath—a feat never before attempted on the RPDR stage. McDonald’s classic Big Mac also comes with its own surprising reveal: yes, two thick and juicy patties are layered between two tender buns, but just when you think it’s a standard burger, it pulls out its secret: a secret sauce, that is, as well as a third bun that’s slipped right in the center of the stack—the gag of the century.

Laganja Estranga: The Chronic Sub – Cheeba Hut
This season 6 contestant and cannabis connoisseur is known for her devotion to dope, so much so that it inspired her drag name. An advocate for the legalization of marijuana, Laganja has collaborated to make her own preroll joint, is developing her own line of gummies, and appeared on the cover of Dope magazine, so it’s high time she be saluted with this dope sub offering by reefer-reverent chain Cheba Hut, which is set to open its first Milwaukee location this spring.

Jaida Essence Hall: Banana Split – Dairy Queen
Reigning season 12 winner and Milwaukee native Jaida Essence Hall deserves a treat as cool, sweet, and classic as she is, and like DQ’s banana split sundae, she always served up something a little different each week and you never got bored of the flavor. The fact that she just happens to be DAIRY-state QUEEN is just the cherry on top.

Violet Chachki: ½ Order Ribs – Boston Market
The ultimate fashion queen, this season 7 winner’s signature minuscule waist was a feat against human body composition. In episode 6, she sauntered down the runway to reveal her waist cinched down to an unfathomable 16 inches. Did she have to remove a few measly torso bones in order to achieve the look? We’ll never know, but Boston Market’s ½ order of ribs may fill out her corset just as well.

Alyssa Edwards: Cinnamon Rolls – Whataburger
Although the Texas dancing queen has never placed above fifth on either of her seasons on Drag Race (season 5 and All Stars 2), her befuddling catchphrases, tongue pops, and sickening dance moves have made her one of the most popular contestants to grace the stage. But she wasn’t always the most popular in the Werk Room. In honor of one of the show’s most sickening burns (delivered by Jade Jolie, of all people)—and greatest Drag Race memes of all time—Alyssa and the Texas chain’s signature cinnamon rolls go hand-in-hand: both sweet, a little messy, but always memorable.

Manila Luzon: Spaghetti & Meatballs – Fazoli’s
A fan-favorite in all three seasons in which she appeared (season 3, All Stars 1, and All Stars 4), Manilla’s creative looks, exceptional charm, incredible sewing skills, and killer lip syncs make her an all-around classic queen. Also, one time on All Stars 4, she dressed as spaghetti and meatballs! There ya go!

Bianca Del Rio: Spicy Chicken Sandwich – Popeyes
This Louisiana native and season 6 winner has a sharp wit, fiery tongue, and is one of the best—if not the best—queen of her craft, much like another Louisiana-born creation that, since its introduction in 2019, has bred its own flock of passionate devotees. (We’ll just look over the fact that Bianca is vegetarian for this one)

Jaymes Mansfield: Wisconsin Cheese Curds – Culver’s
Milwaukee queen Jaymes Mansfield’s Drag Race run was cut short as the first-eliminated queen of season 9, sporting an “udderly” underwhelming cow-themed frock for her hometown-themed runway look. Adding to the sting of her early dismissal, Jaymes later revealed she had, in fact, planned a cheese-inspired princess look for a later challenge in the show, complete with a cheery cheese-curd companion by her side. We would’ve preferred to see that dairy dress instead, but we’ll take a side of curds in honor of Jaymes for now.

Tina Burner: The New Mascot – McDonald’s
A current contestant on Drag Race season 13, Tina rarely strays from her signature red-and-yellow color palette on the runway (Michelle Visage, you can start clocking her any day now…). Her signature style, paired with bright-red wigs and garishly painted face, bear a striking resemblance to a certain corporation’s consummate clown, and why on last week’s Snatch Game she chose to impersonate Richard Simmons and not Ronald McDonald (she was already wearing the wig!) is a misfire we’ll never accept. Tina, use this moment and make it yours. 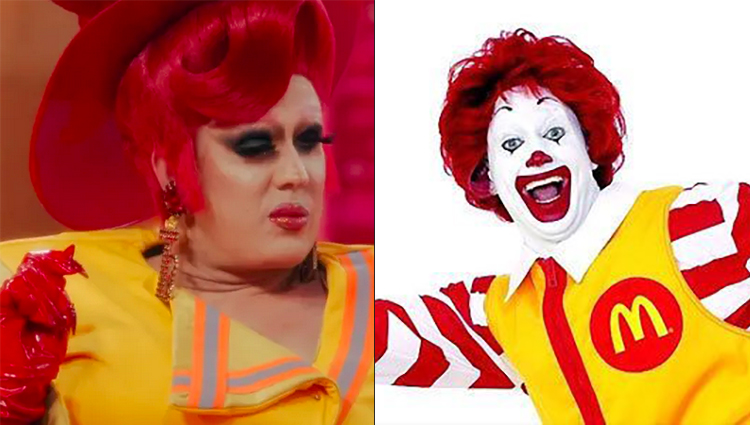