Newsflash: On Sunday, January 15, the Green Bay Packers will travel to AT&T Stadium in Arlington, Texas to take on the Dallas Cowboys in the PLAYOFFS, YES, LET’S TALK ABOUT THE PLAYOFFS. It will undoubtedly be a beautiful, thrilling, and memorable day—especially if Aaron Rodgers does his Aaron Rodgers thing, and even if Joe Buck and Troy Aikman call the game. (An aside: Knock it off with the dumb petitions to remove Buck and Aikman from the booth. They’re fine. Who do you want, Phil Simms or Kenny fucking Albert?)

Anyway, here in Milwaukee, County Executive Chris Abele is making the game a little more interesting by engaging in a friendly bet with his Dallas counterpart, Judge Clay Jenkins. In a Twitter exchange, Jenkins puts up some Texas BBQ, while Abele puts up some craft beer: 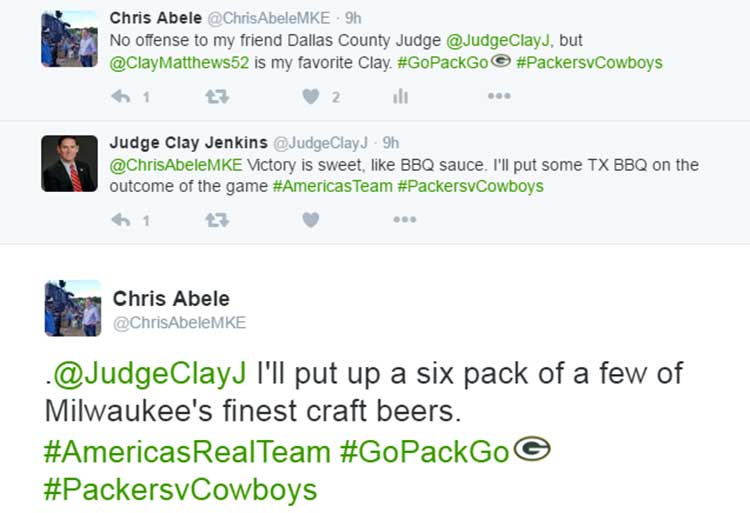 But what to do in a city currently bursting with 8,000 craft breweries? On Facebook, Abele asks for some help:

Alright Facebook, I need your help. I challenged my Dallas County counterpart, Judge Clay Jenkins, to a friendly bet on this weekend’s playoff game. He’s offered to put up Texas BBQ and I am offering up a six pack of some of Milwaukee’s best beers.

Not that I think we’ll be sending any beer to Dallas, but want to help me choose our six? We’ve got so many great breweries to choose from in Milwaukee. A few ideas in my office so far are a Miller High Life, a Fixed Gear from Lakefront Brewery, a Sprecher Brewery Amber Ale, and a Milwaukee Brewing Co Louie’s Demise. Maybe something from Brenner Brewing Company or Urban Harvest Brewing Company?

So which six should it be, Milwaukee? And don’t say MGD.