When lists are made of the world’s sexiest foods, frozen pizza typically ranks somewhere between raisin bread and Cool Ranch Doritos. Jack’s rarely shows up in gauzy direct-to-video sex scenes. Orv’s almost never gets name dropped in steamy slow jams. And yet, like sex, frozen pizza is everywhere. It sustains us, nurtures us, and ensures the survival of our species. It’s a meme. It’s cheap. It’s good.

Enter Pizza Sutra. Since launching on Valentine’s Day 2019, the Milwaukee-based YouTube channel has released a handful of videos that “take you through a landscape of pizza.” Deep-dive reviews of DiGiorno, head-to-head taste tests of Jack’s vs. Tombstone, and discursive discussions of metal bands and Nicolas Cage movies have all been featured. Plus, the Pizza Sutra Instagram and Facebook feeds are filled with stuff like this: 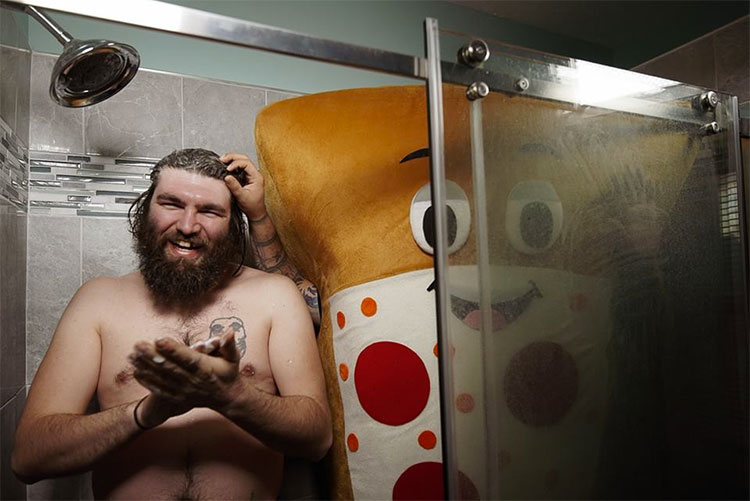 Before Pizza Sutra reveals the winner of its Frozen Pizza Madness tournament, we asked its three founders—oops, make that four—some questions.

Milwaukee Record: Who are the three of you?

Pizza Sutra: Actually there are four of us on the main crew. There’s Billy, Sergio, Tony, and Jennell. Basically just a group of friends who know each other through school or work or some union of the two. Then we have a few more friends swing through that help eat pizza and move a light here or there. We all collaborate on ideas for episodes and photos and such. We’re a ragtag group of pizza pirates. There’s no captain, but we all have to row in unison to keep the ship sailing the seas of sauce and cheese.

PS: Mostly we wanted to make content that spoke to our sensibilities. Plus, we really, REALLY like pizza. We wanted to make the sexiest and most absurd gosh darn pizza show on the internet. (There’s a general vein of seduction and love woven through the themes of the episodes and even the weird photos we take with the pizza costume.)

We didn’t see anything that was quite like what we wanted to do so we just decided to make the show. There are so many review shows on the internet that are mean spirited, overly critical, or just take themselves too seriously. Not us! Plus, you know everyone says “do what you love and write what you know,” and all that stuff. Figured we’d give it a shot. It gives us all something fun to look forward to doing that really is just simply fun to do.

PS: That’s really like a three-part answer. The first is inclusivity. Everyone can get most of the pizzas we try on the show, or can get a resource to find them. If we were doing restaurants it’d feel a bit limited in its reach and universality. It’d be very localized and we wanted to be able to share ZAs with people wherever. Frozen pizza has this ubiquity about it because whether you’re a kid at a sleepover, a college freshman, a mom, or maybe…four grown people in their 30s, you’ve probably had a frozen pizza more recently than you’d like to admit.

The second was logistics. It would just be a pain in the ass to try and schedule time to go to places and worry about all the moving pieces involved with that.

Third was that reviewing restaurants just didn’t seem like our thing. We’d feel terrible for a mom and pop place if we were to adversely affect their business. We think there are enough people shitting on things on the internet. We didn’t really want to be one of those types of things. Even if you watch the show we still love all the pizzas, just on different levels. We try to keep it relatively positive (or at least constructive) feedback. Even if it is run by a faceless corporation. Maybe somewhere down the road we’ll do specials where we go to certain pizza joints and celebrate them. That’d be rad.

MR: What are your pizza plans for the future?

PS: In addition to some goofy photoshoots, we’re going just keep doing our thing. New episodes every other Thursday and some supplementary “sketches” we think people will really dig. We have a rough outline for a second channel that’ll really force us to get our hands dirty. You know? Maybe even a doom metal album. We’ll see…