Brewing is in its golden age. No matter when you’re reading this sentence, there are currently more varieties and brands of beer on Earth being produced by more brewers of all skill levels than ever before. Even with certain notable brewing operations leaving town, Milwaukee is very much an active participant in the ongoing microbrewing boom. If a drawback could ever come from there being more beer than ever, though, it would hang on the incalculably vast gap in quality between the best and worst beers out there.

In an industry that’s a billion-dollar business to some and a homespun hobby to others, the plight of the beer drinker is selecting something worth the price—which also seems to be growing along with the volume of brews out there—from an endless sea of bottled and barreled barley and hops. Most often, the alcoholic output of aspiring brewers lands somewhere in the safe zone due to fear of deviating too far from a home brewer manual’s affable-though-uninteresting guidance. As unmemorable as these beers were, we faintly recall such a feeling locally with St. Francis Brewery, Big Head Brewing Company, Big Bay, and (going from a small recent sample size) District 14.

So when a new small-scale brewery with an even smaller budget quietly comes on the scene with a vast arsenal of both standard and batshit crazy-sounding beer, it’s refreshing to see. Add in homemade liquor and dirt cheap bar food, and we’re there. Now no stranger to some of Cudahy’s dirty-but-lovable daylight charm, we returned in the afternoon on a weekend to see whether Tornado Brewing Company (3506 E. Layton Ave., 414-763-5033) bit off more than it could chew, or if some of metro Milwaukee’s most unique beers were being served up in the shadow of Cudahy’s meat-smoke on Layton Avenue.

The space: Like more than a few watering holes dotting the no-frills industrial suburb’s landscape, Tornado is built into what once served as a house before berthing a litter of short-lived dive bars such as Cat Daddy’s, Club VIP, and CJ’s Station House. The exterior of the large stone house-bar is covered in a variety of signage proclaiming the young bar (there since late September) that’s closed three days a week was, in fact, open for business. Walking up a few steps and through the front door, we were somewhat surprised, but encouraged, to see every spot at the front bar occupied with fellow day-drinkers. To the right of the flowery cast of Cudahyans, there was a small cluster of tables. Beyond the patrons and through a door, the bar extended into a wood-paneled back room that housed kitchen implements and a pool table. The decor is minimal, with just a few twister-focused pieces nailed to sections of wood paneling to aid the tornado motif. Something tells us the empty sections of wall will fill in with accessories once the customer base grows.

The service: We were welcomed by Tornado’s owner/operator/head brewer/bartender/janitor/only employee Dennis Erb, who was mid-explanation with one of the eight or so customers who had preceded our early afternoon visit. In the meantime, Erb referred us to a screen mounted beside the bar that flashed a list of the 12 beers running through his tap lines. As he walked our way and introduced himself formally, Erb informed us that smaller serving sizes were available, if we wished to avoid traditional pints in favor of eight-ounce samples. Behind him, there was a food menu that featured bar basics on a budget, like homemade burgers ($2.50-$6) and a fatty cluster of fried appetizers like cheese curds, broccoli and cheese bites, and chicken wings (nothing over $4.50). We learned that Erb’s beer recipes, his menu, and his bar-side manner were forged at his other longtime bar, Whistle Stop Inn, about 100 miles west of Madison (in Woodman, where his beer is currently brewed because it has “better water”). Some drinks even came in Whistle Stop glasses.

Milwaukee Record’s food/drink: We took Erb’s advice for flight-sized servings of his beer, and ordered two at a time. First, we solicited the 100 IPA. Then we opted for the strangest sounding of the dozen, the Jalapeno Blonde, which warned of spiciness. The outgoing IPA wasn’t shy in the hops department. It was an above-average and delightfully bitter introduction to Tornado, but not exceptionally out-of-step. The Jalapeno Blonde’s intensity, however, became apparent before the glass even touched our lips. The sharp aroma of fresh peppers entered our nasal cavity and, as we double-clutched our inaugural hoist, let us know what we were getting into. Somehow still holding the light golden hue of a blonde, the beer toted some bite. However, it was somehow light and refreshing while leaving our lower lip tingling, our sinuses clear, and our palate refreshed.

We continued the one-normal, one-weird pattern rolling for another round with the Scotch Ale and, get this, a BBQ Saison. The Scotch Ale wasn’t groundbreaking, but nowhere near shabby either. And holy shit, the BBQ beer was an anomaly. It tasted verbatim like savory Sweet Baby Ray’s in (more) liquid form. We asked Erb what was in it to make a session beer taste like that, and he told us it’s a BBQ sauce recipe, except with beer subbed in for vinegar. Forget Bloody Mary chaser, this would make a good Bloody Mary. We got a sample of Irish Red Porter to wash down our tavern league average hamburger, and enjoyed it…until we tried our guest’s Sweet Potato Porter, which was as yammy as it was yummy.

Though the beers (as tiny as they were) had begun to add up, we did what any responsible journalist would do and sidled up to the since-vacated bar and inquired about the liquors. Beyond bottles of Jaeger and some cordial components, all the liquors are made and jarred by Erb. We settled on a bourbon and (fast food issue soda fountain-dispensed) ginger ale. Instead of being aged in a barrel, Tornado’s bourbon sits in a jar that has a bed of cedar chips on the bottom. Erb also touted a self-produced malt liquor, which he said could be used to make alcoholic sodas, hard ciders, and the like. However, we were already pretty well on our way to an early-afternoon blotto, so we left having enjoyed five small beers, a cocktail, and burger, and having purchased an Old Fashioned for someone else, to the tune of $18.50 before tip. Whoa.

The verdict: If you find yourself in Cudahy between Wednesday and Saturday and you have a thirst for adventure as well as decent-to-downright tasty brews, blow on in to Tornado Brewing Company. At worst, it’s a cheap experiment. At best, you have an interesting new haunt on the way way south side. 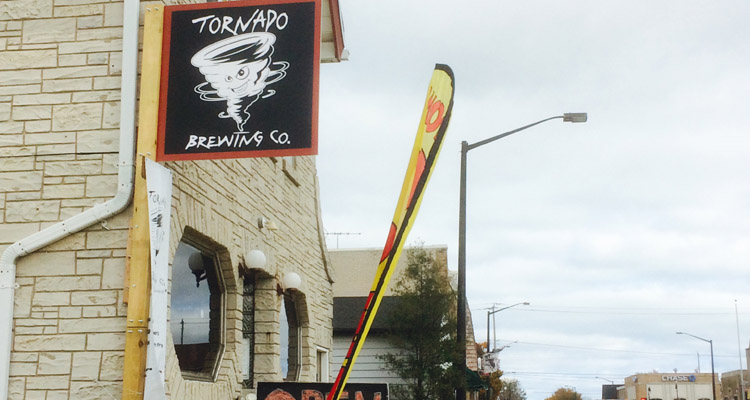