Walker’s Point, like much of Milwaukee at the moment, is changing. The Polish Moon now overlooks posh new shops flying the “People’s Flag Of Milwaukee.” Sleek and cutting-edge restaurants, bistros, and lounges are popping up beside longstanding Mexican food staples and venerable gay bars. Of course, it wouldn’t be an epoch of so-called Milwaukee “development” without mixed-use apartment complexes being erected side-by-side on corners and along commercially-lucrative causeways in the neighborhood.

Though many of the new luxury dwellings have yet to see their uses “mix” in regard to getting ground floor tenants to further “activate” the space, the just-built Trio apartment complex now houses an establishment that’s emblematic of Walker’s Point’s dual identity in 2017. Since quietly opening June 1, The Laughing Taco (1033 S. 1st St., 414-210-3086) has stood with one foot squarely in the rich, delicious and vanishing accessibility of the neighborhood’s dining past, and the other foot in the handcrafted, high-quality and pricier aspects of Milwaukee’s ongoing culinary revolution.

Owned by Lucia Munoz and husband Justin Carlisle (of Ardent and Red Light Ramen notoriety), the corner taqueria could help bridge the widening gap in Walker’s Point dining with inspired takes on simple and traditional foodstuffs that are served at the bottom of a shimmering apartment building. Or it could just be another taco place. Milwaukee Record paid an early visit to find out. 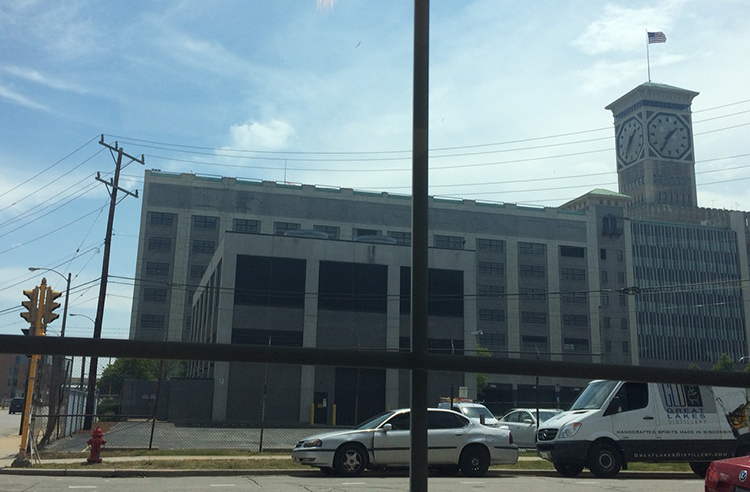 The space: As mentioned above, The Laughing Taco is nestled into a cozy spot at the corner of 1st and Washington streets. Upon entry, prospective diners immediately reach the counter where orders are placed, and behind which a spit of pork slowly rotates as grilled meats and vegetables sizzle. Beside the front register, the almost-clinically white counter twists into a dogleg that can host a few customers—about half the fast-casual establishment’s 16 bright red stools. Behind that, another counter runs the length of the restaurant, facing out on Washington Street.

During out visit, the single wall-mounted television aired a soccer match, which was muted to accommodate the soundtrack provided by vibrant modern music. While the weeks-old taqueria’s decorations are, well, non-existent, a front row view of the staff at work or the bustle of 1st Street (or the aforementioned Polish Moon looming nearby) out the windows offsets the interior sterility. At any rate, between the speedy service and the top notch tacos, you won’t be there very long. 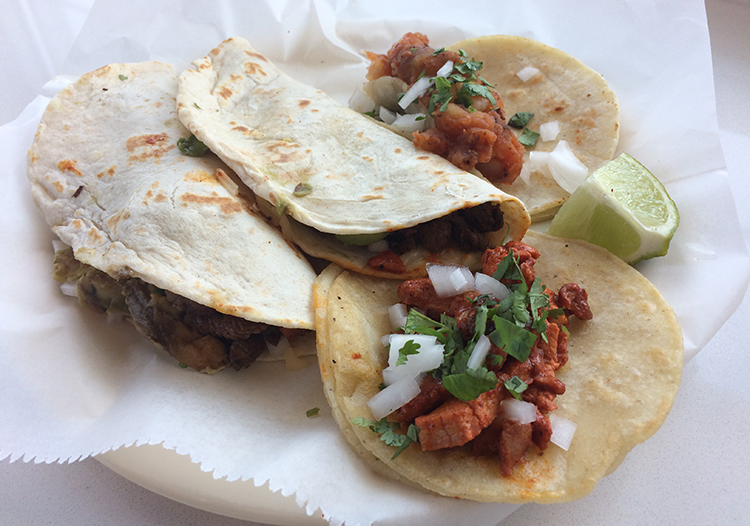 Milwaukee Record‘s food: The simplicity extends to The Laughing Taco’s menu. In total, just seven tacos are on hand, ranging between $2.50 and $5 in price, or discounted if purchased in orders of five. There are Mexican sodas, five domestic beers (Mexican restaurant standbys, Spotted Cow, and Pabst), and tequila-spiked slushies available, too. Seeing how small both the menu and the tacos themselves were, we made a significant dent in the menu during our maiden voyage.

Maybe five minutes after ordering four tacos, they arrived on plastic flatware. The Papas ($2.50), predictably, was a spiced dollop of potato and pieces covered in tomato sauce as well as diced raw onions and cilantro, that all came atop a diminutive duo of fresh, warm corn tortillas. The second verse was the same as the first with the Trompo ($2.75), except tender pieces of delicious pork and corn took the place of potatoes alongside the onion and cilantro on the excellent corn tortilla conveyance. We then tried two of the three flour tortilla tacos available, starting with the Pirata ($4.75)—savory pieces of spiced carne asada anchored with a backing arsenal of cheese, cilantro, onion, and ample hunks of avocado—before saying hasta luego to onion and cilantro with the mixture of seasoned steak and pork, cheese, and avocado in the Campechano ($5).

It was a close race, but ultimately, the latter two tacos prevailed on account of their size (almost twice the tortilla diameter) and the eternally-welcome addition of avocado. Despite dropping $15 (plus tip) on four tacos—two of which were abnormally small—to this point, we returned to the counter for the Bistec ($2.75) that was essentially a corn tortilla rendition of the Pirata sans cheese and avocado, and the Nopalitos ($2.50). The latter was a smattering of seasoned chile-sauced-smeared cactus pieces, corn, and onion. In the three bites it took to dispatch the taco, we found similarities with veggie fajitas, except with the sweeter and juicier cactus serving as a better-fit substitute for green pepper. Each of the tacos were carried to even higher ground by the tremendous sauces on-site, ranging from a creamy and spicy green chile to a peppery red mild that proved especially complementary of the steak tacos.

The verdict: It’s no laughing matter. As Walker’s Point’s trajectory changes and its epicurean identity is augmented with each new business that takes root in the neighborhood, The Laughing Taco exists as an intersection set between tasty traditional tacos and the city’s encouraging culinary growth.