When one ponders West Allis, the common reflex is to dredge up a bunch of stereotypes. Like all stereotypes, those affixed to ‘Stallis are at least vaguely fashioned from truth. The polarizing suburb is definitively and unapologetically blue collar, which makes the city mockable to some and admirable to others. A prime example of this feeling is the combination Family Video/Subway on South 76th St. that stands as a monolith, defiantly and seemingly invincibly in the face of time, the economy and reason itself. And yet, almost paradoxically, foodie list darlings like TomKen’s, Antigua, and Chef Paz have helped West Allis quietly carve out an interesting little culinary identity for itself. We took a trip to Jack Rabbit Slim’s (8028 W National Ave, 414-988-9649) to see if the newly-opened Cajun- and Southern-inspired fare would have it join the ranks of West Allis favorites.

The space: The wacky neon sign featuring the beer-swilling rabbit cartoon that serves as the restaurant’s assumed mascot pulls no punches at letting the diner know exactly what they are getting into by choosing Jack Rabbit Slim’s as their dinner destination. Upon entering, the restaurant guests are greeted once again by a massive, die-cut drunk rabbit sticker festooning the unattended host stand that looked out onto the rest of the space. Jack Rabbit Slims’ seating is probably about two thirds bar seating, then a few booths, and that’s about it. The bar is built in the middle of the restaurant and splits the dining room in two separate sections. By the looks of it, one side is effectively closed down unless business demands otherwise.

Everything about Jack Rabbit Slim’s is loud. The lighting as provided by neon signage, big screen TVs (showing some deer hunting show), the mascot, and the electronic gambling games. The clientele and the very fitting classic rock that was played just loud enough to necessitate shouting across the table. The cacophony makes Jack Rabbit Slim’s less of a restaurant and more of a bar with an extensive menu.

The service: As it turns out, that aforementioned unattended host stand wasn’t a fluke. After twiddling our thumbs by said stand for about five minutes, the bartender took notice and—unable to shout over Nazareth’s “Hair Of The Dog”—pointed us towards an empty booth. The server wasn’t negligent by any stretch, but once again, the volume of the music made the process of ordering awkward and a little frustrating.

Milwaukee Record’s food/drink: Jack Rabbit Slim’s self-describes as offering Southern and Cajun fare, but it’s more accurately a twist on the former, with only a subtle nod toward the latter. This observation isn’t a slight, it’s difficult to find the right words to properly frame the menus concentration or theme. What doesn’t help is the menu’s befuddling layout. First, there are three different appetizer sections. One can choose something from “Appetizers,” “Specialty Appetizers” or “Odds & Ends.” 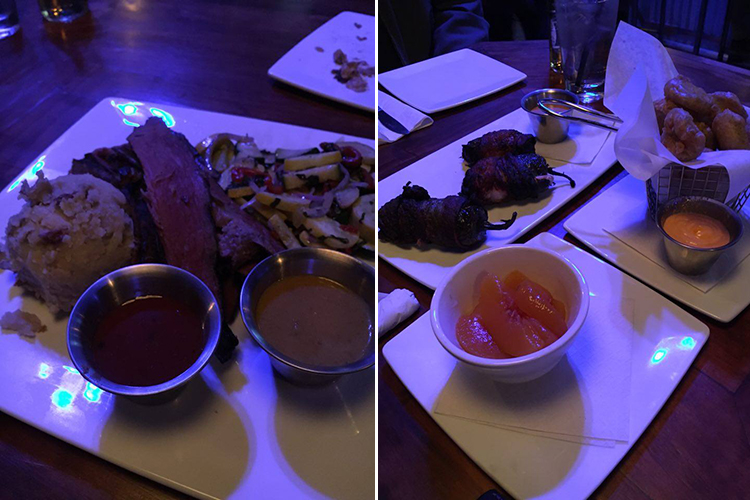 Glaring menu problems aside, the food actually delivered. We ordered the southern pickled peaches ($3), Memphis style pickle chips ($5) and Texas Twinkies ($7.50) to start. The pickled peaches were a simple, ungarnished bowl of peaches that were actually quite delicious. The menu says “tastes like peach pie without the crust,” but the subtle zing of a quick pickling took away the cloying, clinging nature of sugary peaches and replaced it with a refreshing zest. There was nothing especially signature about the pickle chips. We’re not sure what “Memphis style” means, but it’s a little hard to believe that sriracha aioli has anything to do with it. Either way, the snacky appetizer was executed well and actually quite addictive. Finally, the Pièce De Résistance: the Texas Twinkie. This wad of arterial destruction is composed of a jalapeno, which is stuffed with cream cheese and smoked brisket, wrapped with bacon and then deep fried. Delicious? Obviously. Disgusting? Obviously.

Our commitment to delving deeply into Jack Rabbit Slims’ menu waned aggressively after destroying ourselves with the appetizers, so we decided to split the brisket platter to wrap things up. The platter was a pretty impressive array of brisket, the vegetable of the day, some garlic smashed potatoes, and cornbread with honey butter. The platter was a mix of hits and misses. The vegetable was a delicious squash medley, the smashed potatoes were dry and texturally unpleasant. The cornbread with honey butter tasted objectively excellent, but was sweet enough to be a dessert. The brisket itself was well-executed and satisfying, but the accompanying sauces seemed inappropriate for the given meat. The drink selection was unremarkable, almost to the point of not warranting mention. The beer list is essentially your run of the mill combination of a couple very popular out-of-state microbrews, local Lakefront and New Glarus staples, and seemingly every beer bearing Miller’s name.

The verdict: There is nothing defining or outstanding enough about the place that makes it more special than several places within Milwaukee city limits. If Jack Rabbit Slim’s is going to be a bar, then it should reduce its menu significantly. It’s hard for us to imagine prospective diners casually sidling up to a bar after work for one or two beers and a meatloaf platter. Conversely, if a restaurant is the plan, then the aggressive, loud bar vibe has to be taken down several notches. Having established all of this, if the same property was closer to home, we’d likely amble in and stumble out every so often. While the food is lacking sophistication, it also has heart.