In a year as draining as 2017, it’s almost impossible not to romanticize the past. No, we don’t mean last year when the orange guy wasn’t president—we’re talking about the days when our parents and grandparents were hitting the town and most of us were just mere twinkles in their starry eyes. With the help of Mad Men and Downton Abbey, many people today have rich, deeply engrained fantasies about those long-past eras. From the clothes and furniture to the cars and music, a lot of things back in the day seem a lot more glamorous (or, to use contemporary vernacular, boujee).

Society has come a long way since the roaring twenties and the swinging sixties, both socially and technologically. We’ve replaced our gramophones with smart phones, and creeps like Don Draper wouldn’t easily get away with blatant racism and sexism anymore. Even though the aesthetics of yore are still desirable, their dark underbellies certainly aren’t.

Thankfully, there are a few modern establishments that still maintain decadent vintage style while encouraging visitors to post poorly lit photos on Instagram. Caroline’s Jazz Club isn’t even old enough to be a millennial, but the “blink and you’ll miss it” corner venue transports patrons to a forgotten era of live jazz, cheap drinks, and endearingly gaudy carpeting. Located on a tiny, unassuming Walker’s Point corner, Caroline’s is bustling every Wednesday through Saturday night with diverse crowds eager to absorb the club’s infamous ambiance. 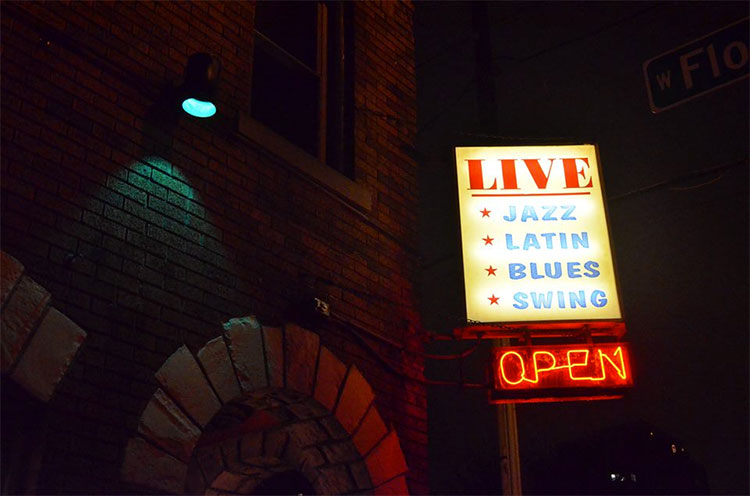 Caroline’s is closed Sunday through Tuesday, and the little nook where the club is located remains dormant during the first half of the week. But don’t let Caroline’s seemingly small and peaceful exterior fool you. The club’s interior is surprisingly accommodating to weekend crowd sizes, with a small bar and spacious seating area in front of the stage. There’s no bouncer at this club; instead, there’s a doorman who politely asks for the $5 cover with a friendly smile. He even has his own business cards!

The bar area is modest in size, meaning the service is both quick and personal. The bartenders at Caroline’s are affable and dressed to the nines—not one staff member is donning jeans, T-shirts, or sneakers. Like most old-school joints, Caroline’s doesn’t have a drink menu, but the list-less bar only plays to the club’s advantage. Caroline’s serves wine and locally brewed beer (unlike some other famed Milwaukee cocktail bars), but it only feels appropriate to enjoy live jazz while sipping a martini, Manhattan, or Old Fashioned.

If music is the universal language, everyone who walks through Caroline’s front door speaks it fluently. Friday and Saturday are the club’s busiest nights, and the crowds are always a diverse mix of jazz fans from various walks of life. Groups of twenty-somethings huddle around candle-lit tables lining the club’s walls while middle-aged couples nestle near the stage. Out-of-town visitors would question Milwaukee’s “most segregated city” status upon a visit to Caroline’s. Patrons of many races, ages, and social classes flock to the dimly lit club to enjoy a memorable night out.

Caroline’s Jazz Club opened in 2000, but the building has a history as rich and diverse as its customer base. According to Urban Milwaukee‘s Michael Horne, the building opened in 1880 and served as a saloon and boarding house until the Prohibition era. It was during that dark time in Milwaukee history when the saloon started serving “soft drinks” to thirsty patrons before becoming a perfectly legal tavern in 1933.

Though the building has housed many places to drink before Caroline’s inception, the club’s aesthetics are seemingly unchanged since the speakeasy days. The club is mostly lit by candles and string lights, giving the entire space a natural vignette that mirrors old photographs. The dark green walls are covered in brass musical instruments and artwork. Stained-glass windows give the club a Renaissance-era sheen, and the various plants that call the club home enhance the already lush ambiance. It feels like Christmas year-round thanks to the flourishing greenery, twinkling lights, and slick, velvety textures.

It’s hard to carry a thoughtful conversation over a silky smooth sax riff, and the patrons at Caroline’s understand this. Most people choose not to chat or text and instead focus their eyes, ears, and undivided attention on whoever is performing. Caroline’s highlights a wide array of local talent, especially artists whose genre of choice may be too niche for the more accessible Milwaukee music venues. Wednesday nights feature open blues jams, and Thursday nights offer open jazz jams. Friday and Saturday nights are dedicated exclusively to bands. Guests can catch a sneak peak of the club’s performers on Caroline’s Facebook page.

With Gibraltar’s recent opening and The Jazz Estate’s remodel, it seems like jazz is hotter than ever in Milwaukee. Caroline’s Jazz Club is unmatchable in style, ambiance, and authenticity. If you’re looking for an affordable place to impress your date, your friends, or even your parents, Caroline’s will do the trick. Dress shoes optional, but encouraged.