“You beat me. You’re quicker than most people,” the hostess remarked, as she set down a placemat and silverware after I was already halfway in a seat. I had just respectfully barreled my way through the dining area and around the far side of the corner table at Wegner’s St. Martins Inn (11318 W. St. Martins Rd., Franklin, 414-425-9971). In my defense, almost everything that’s hanging on the walls of the restaurant is automobile themed—and most of it has to do with racing—so I was just sticking with the theme. But I wasn’t looking for the dining room’s racing line because I’m a motorsports fanatic. No, I was on the move because it was Friday and the checkered flag had a fish fry on the other side of it. 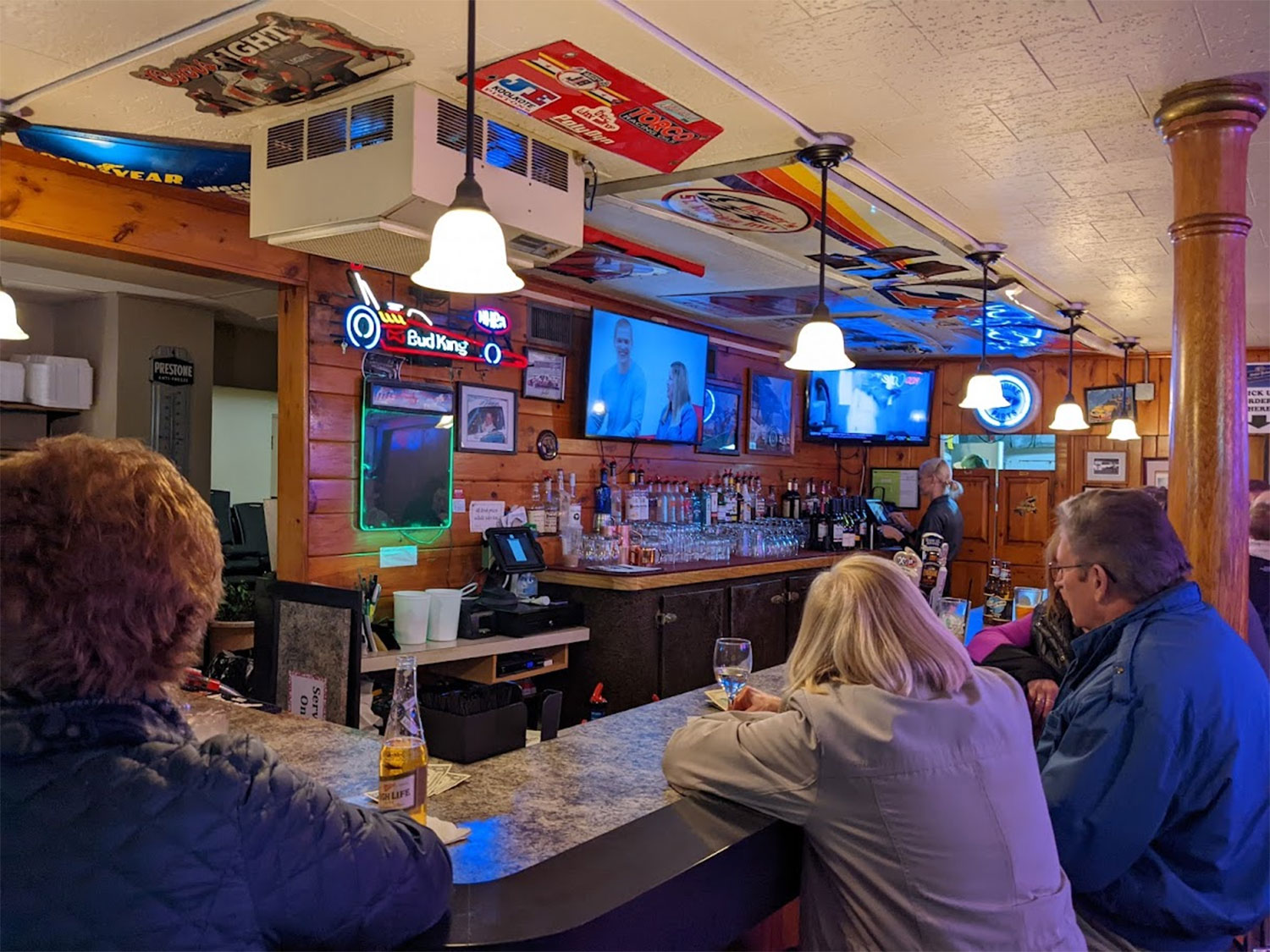 Dennis and Kathie Wegner opened Wegner’s St. Martins Inn in 1997. Dennis had previously been a chef at Mader’s for over two decades. Prior to Mader’s, he worked at a few other restaurants, studied under a French and German chef at MATC, and was an apprentice of an Italian chef. He got his start with food at a Marc’s Big Boy while in high school.

The “St. Martins” part of the restaurant’s name may refer to Franklin’s old hamlet of St. Martin’s, where the building is located. The hamlet was named for Father Martin Kundig, who settled the area in the 1840s and started Holy Assumption Parish. The church burned down in 1866, but a new one was quickly built to replace it. The church building still stands and is located just across from Wegner’s St. Martins Inn. Today it is Cornerstone Bible Church. 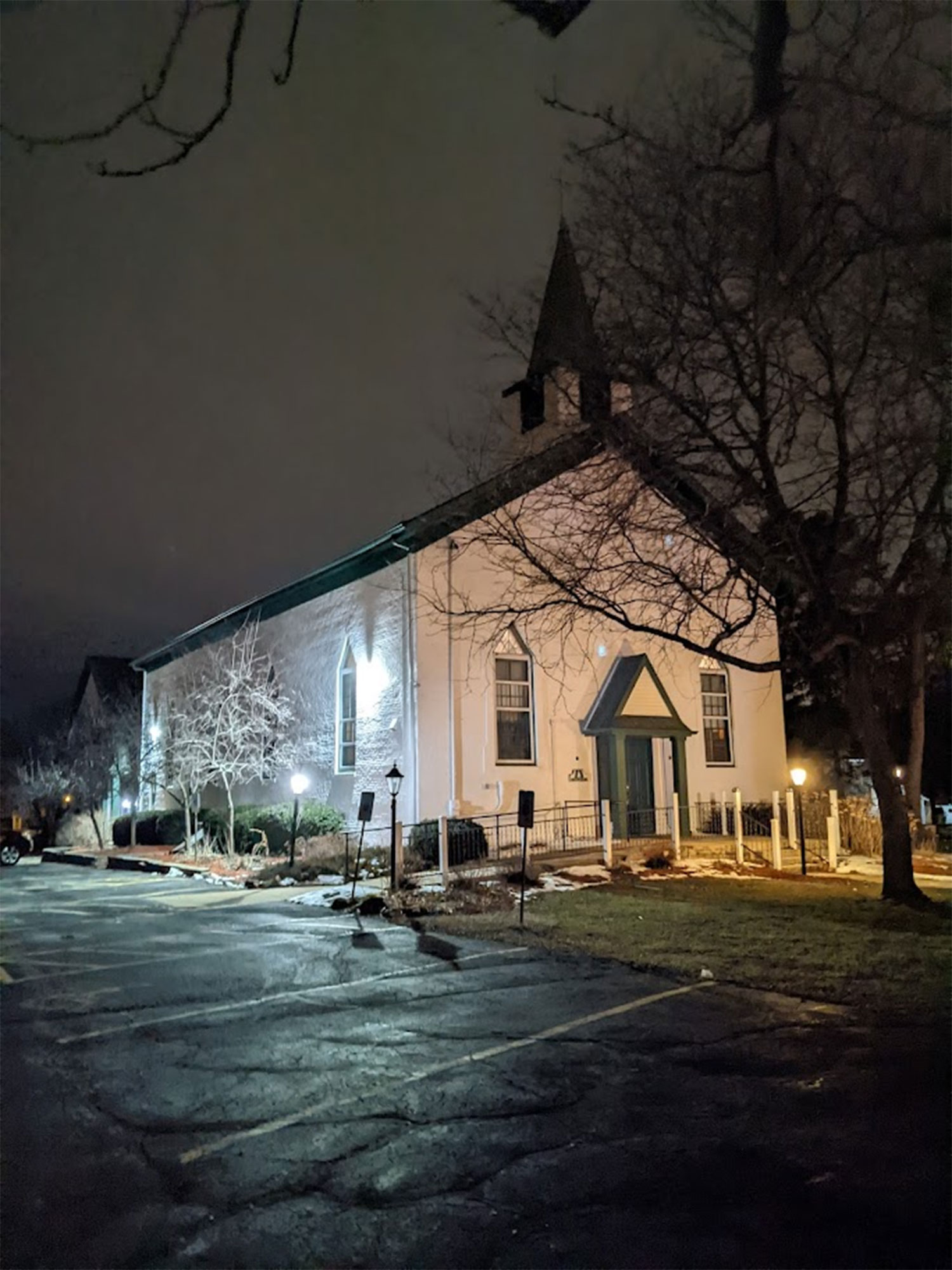 This is Wisconsin, so the church and the restaurant have an agreement that the church gets to use the restaurant’s garbage dumpsters, as well as its parking lot on Sundays, while fish fry goers get to park in the church parking lot on Fridays. Jesus might have fed fish frys to 5,000 people with five loaves of rye bread and two small fish, but the Cornerstone Bible Church is doing the Lord’s work every Friday, and surely has helped feed more than 5,000. I’ve been to Wegner’s for fish three times—most recently in September—and I’ve always parked in the lot.

Long before becoming Wegner’s St. Martins Inn, the building was home to Casper Jochem’s St. Martins Inn. Casper Jochem (1859–1942) operated the establishment, which was a general store, if not an inn too, until about 20 years before he died. His father, Frank, came from Germany to New York City in 1854, and to St. Martin’s in 1855. Shortly after arriving, he opened a general store, which also had a post office and saloon in it. I wasn’t able to confirm it—although Frank lived to be 99 and almost could have told me himself—but in all likelihood Casper and Frank’s store were one and the same. 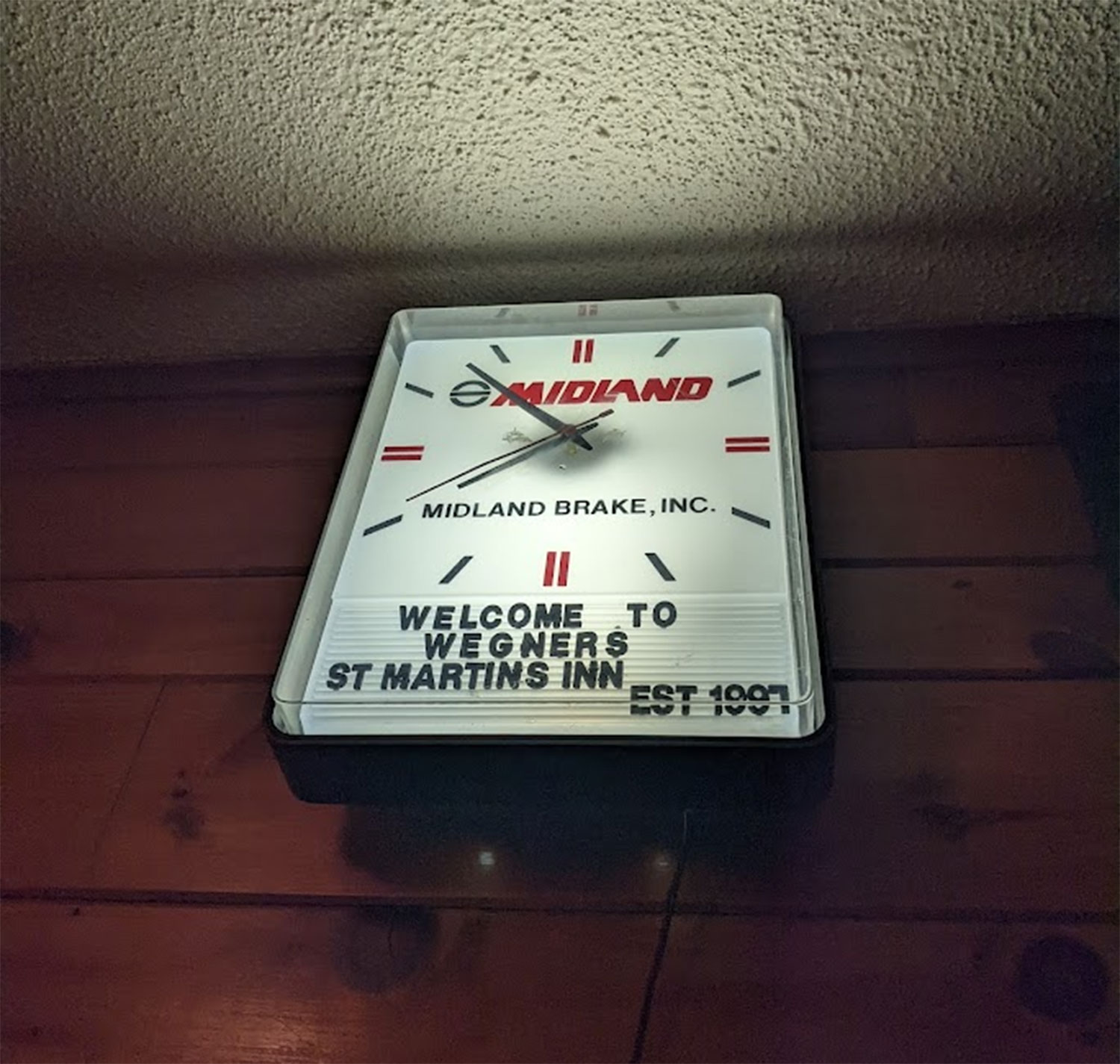 Those poor souls who don’t fancy fish can order the For The Land Lover ($8.25 for Usinger’s Knackwurst with coleslaw, rye bread, and choice of potato). Homemade New England clam chowder is available ($4 cup/$4.50 bowl). The bottom of the menu is devoted to children under the age of 10. They can order any of the following served with french fries: St. Martins Fish Fry ($7.75), Deep Fried Shrimp ($9.50), Fresh Lake Perch ($9.50), and Grilled Cheese or a Hot Dog ($5.75).

This week I went with the Taste of Our Friday Night Favorites, selected the potato pancakes, and rounded out the meal with a cup of chowder. The thinner, souplike chowder was well-stocked with vegetables, especially somewhat hefty chunks of skin-on red potatoes. A scattering of green seasonings and a hearty amount of clam filled out the rest of the chowder. 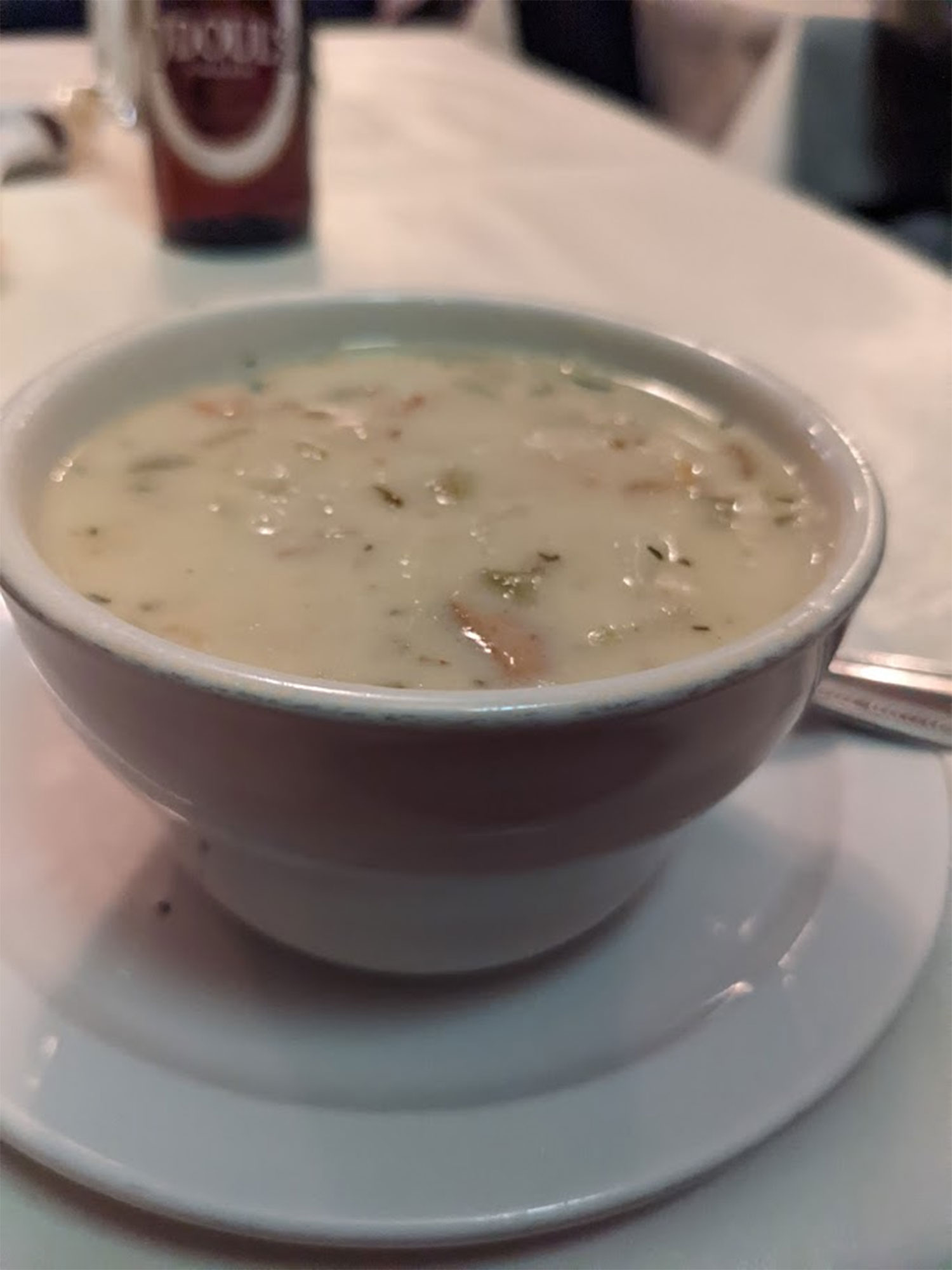 The bread, listed as being from Canfora Bakery (now Lakeside), was a heavily buttered and succulent half slice of marbled rye. The slaw was excellent, being creamy but not runny or overly saucy. Mint green in color, with some orange carrot and a dash of seasoning mixed in, there must have been a secret to its simple perfection.

Asking if the pancakes are made at the restaurant is a trick question: the recipe is Dennis’, but they are made off-site. One doesn’t need to play the is-this-a-pancake-or-really-just-a-hash-brown game. Compact, with finely chopped or grated ingredients fully encased inside them—perhaps including some onion powder and herbs—they were somewhat unique and unquestionably in the potato pancake camp. A few snips of fresh parsley sat atop them.

Three pieces of perch—two of them still butterflied together—and two pieces of haddock were the meal’s centerpiece. Both had a crunchy coating, but they diverged from there. While the perch was breaded, the haddock was beer battered. The breading was thick with plenty of texture, and maintained a softness despite being crunchy. Mild in flavor, it was an ideal counterpart for the fish it covered, which also was mild. The batter on the haddock was golden brown and glazed, and harder than what covered the perch. Underneath, the large haddock pieces were meaty and white as snow. Thin and relish heavy, the tartar was not particularly memorable, but served its purpose. 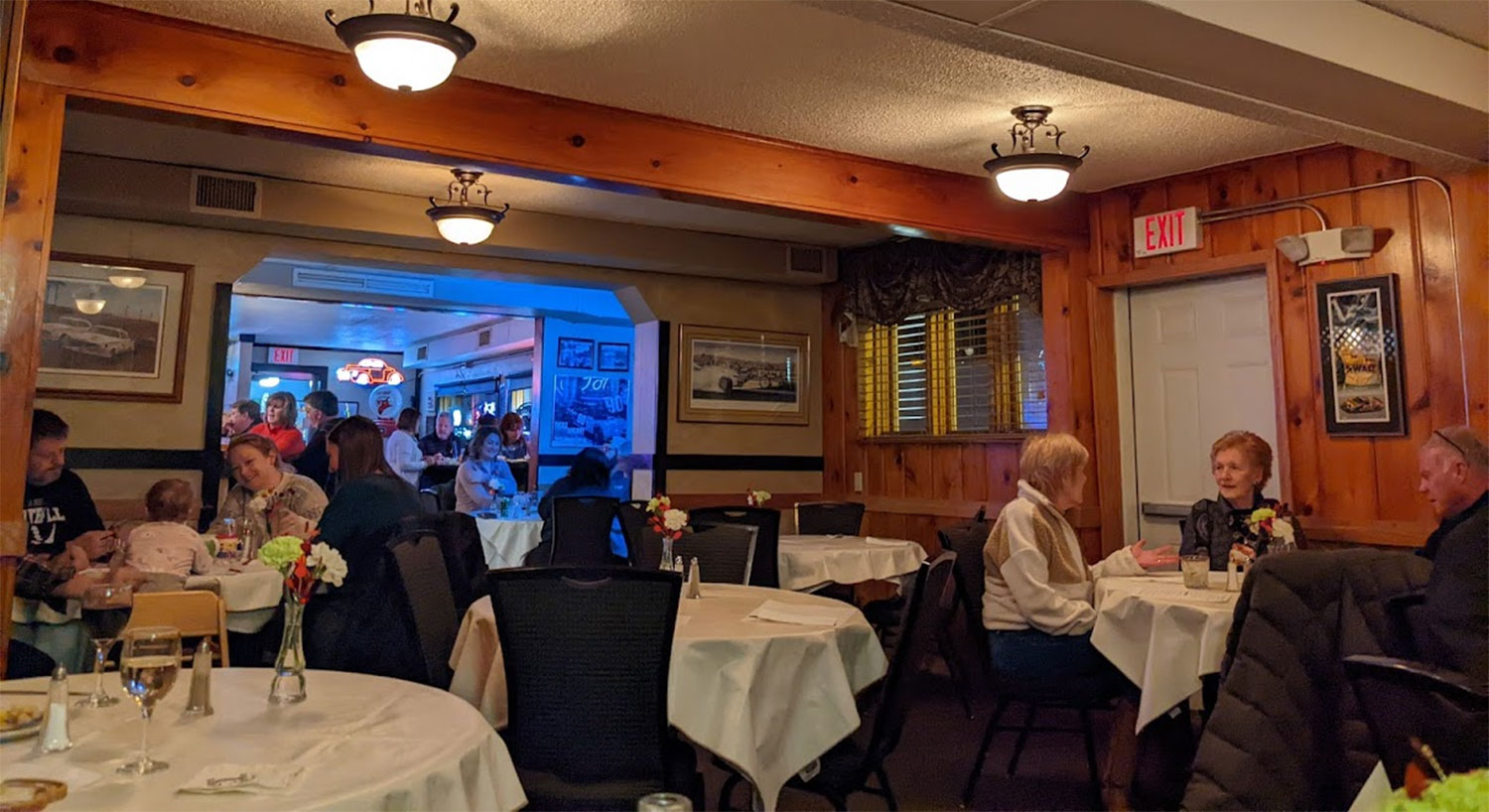 Neither the perch nor the haddock are immaculate, but they have many merits. Taken together with the rest of the food, as well as with the atmosphere, it’s not difficult to understand why Wegner’s St. Martins Inn has been in business for almost a quarter century. Surely their fish fry is a Friday night staple for many, and you’d be remiss not to make a stop for it at least once. 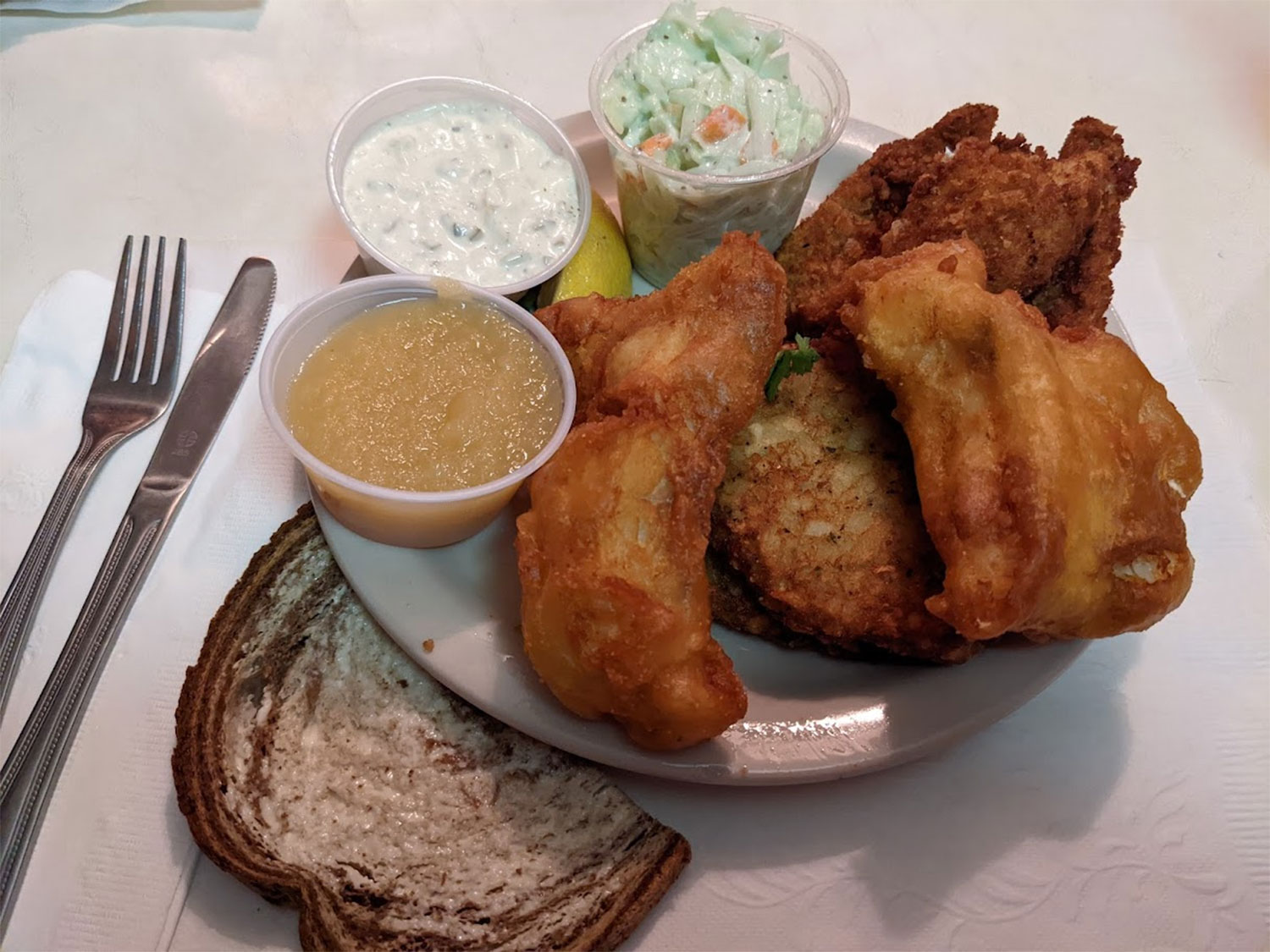