Since COVID-19 reared its head in our community, I’ve been staying within a 15-minute radius of my home for fish frys. This has resulted in most of my stops being in Walker’s Point and Bay View. I wanted to go to a different area this past Friday, and after some deliberation, I set my sights on The Hale House in Hales Corners, a restaurant right on the edge of that 15-minute bubble. Why pick them? I saw they had something called “The Fish Monger” on their menu, which had a combination of cod and bluegill and perch, oh my!

I called at 3:38 p.m. and the line was busy. After a few tries, I got through at 3:42. I put in an order for The Fish Monger, clam chowder, and some nachos for my roommate. I was about to ask them if 5:30 would be an okay time for me to pick the food up when they said, “That will be ready in about 15 minutes.” Man, that’s a quick fish fry! When I asked if I could place the order for a later time, they said that wasn’t possible. Being that I was 15 minutes away from them to begin with, and seeing that I was planning to ride with my roommate and he was outside exercising, and being that it was still pretty early, I asked them what time they thought I should call back to place an order if I wanted to get the food at 5:30. I acknowledged it probably would be hard for them to tell as they would likely be getting busier as the night progressed. They told me to try calling back at 4:30. 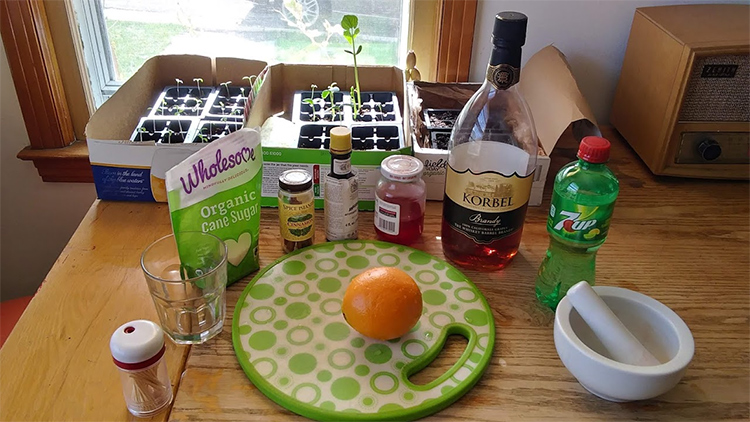 There was one other reason why I didn’t want to immediately head out to pick up fish. I hadn’t had an Old Fashioned before a fish fry since mid-March, and I decided this was the Friday that it was going to happen. At 4 p.m., I walked into my kitchen and got to work. I muddled an orange slice with some cherries, a dash of cherry juice, bitters, and some sugar. I transferred it into a glass, threw a couple ice cubes on top, and poured in some brandy. Finally, I topped it off with some 7 Up, stirred it up with a cinnamon stick, and skewered an orange slice and some cherries on a toothpick and set it on the brim. The Old Fashioned was pretty decent, but the bartender used too much cherry juice when he muddled it, and he didn’t put in enough booze. I made him pour in some more. 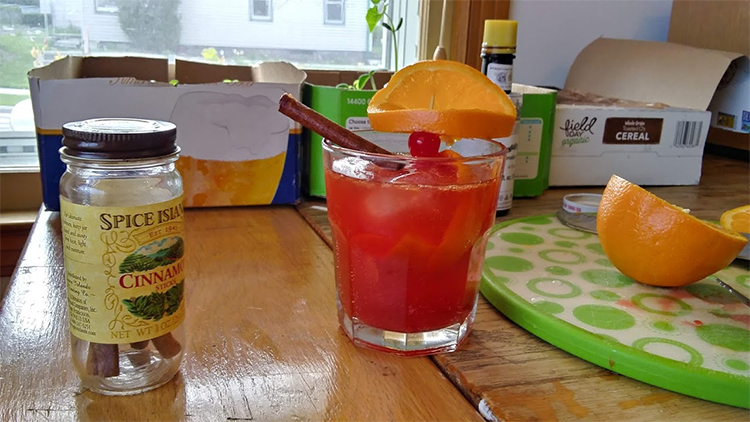 At 4:25, I got back on the phone. I figured it would be harder to get through since it was later, and I figured they’d be busy because I knew the place is quite popular—the thing I remember most from when I got a takeout fish fry there in 2016 is how packed they were. After a half an hour I started getting antsy, and it dawned on me that if it was that hard to get an order in, it would be an even longer wait to get food. After calling 124 times in 41 minutes with getting nothing but busy signals, I stopped. I thought about where to try next, and decided on Scotty’s Bar & Pizza (3921 S. Clement Ave., 414-481-6060). I hadn’t had their fish fry since the summer of 2015, and I couldn’t remember anything about it. 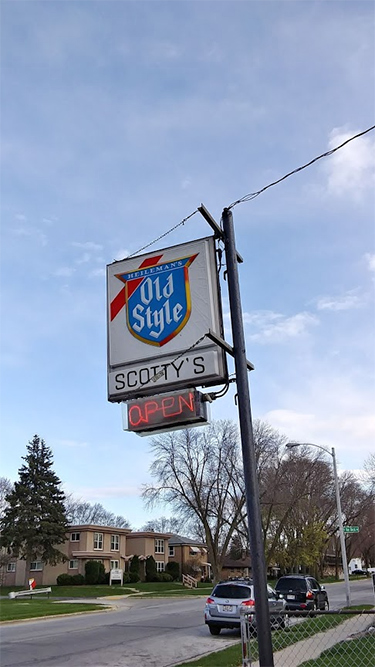 Scotty’s, which Milwaukee Record has featured in their Tucked Away series, is located at the southwest corner of E. Howard Avenue and S. Clement Avenue, in Milwaukee’s Tippecanoe neighborhood. A pizzeria might not seem like the usual type of place to get a fish fry, but their Friday menu lists a variety of offerings, which are available for pickup or delivery from 11 a.m. – 8 p.m. on Fridays. The fish choices are breaded cod ($12.75), baked cod ($13), beer battered cod ($13.25), breaded lake perch ($15), and beer battered perch ($15.75). They also offer fantail shrimp ($13.25), breaded scallops ($13.25), and a seafood platter consisting of cod, shrimp, and scallops ($14.25). All of these dinners come with coleslaw, rye bread, and a choice of french fries, parsley boiled potatoes, or potato pancakes. Breaded fish sandwiches with french fries ($8.75) are also available. I went with the breaded cod with pancakes.

I was told it would be about a 45-minute wait for the food, and they ended up being spot on with their estimation. I didn’t realize they were going to call me back again when my food was ready, but as I was getting in my vehicle to head over, I received a call telling me just that. There were two other patrons standing in the parking lot near the building’s entrance when I arrived, one with a mask and one without. I had on my mask and placed myself about 20 feet between them, as if to form a socially-distanced human triangle. A worker came out and I said who I was and they finished taking care of the other patrons and then brought me my food. I was a little taken aback—both figuratively and literally—that they weren’t wearing a mask. But, I should point out that Scotty’s has otherwise been proactive during the pandemic. They put out a statement that demonstrated this last month, and they also put out a statement shortly after this week’s Supreme Court decision was made, stressing their continued focus on safety.

Most fish frys tend to come with three pieces of fish, but at Scotty’s you get four! The ones I received were meaty and flaked well. This was somewhat apparent just by looking at them—they appeared ribbed from a distance. As for the breading, it was very light and mild, with just a pinch of seasoning. It wasn’t loud and flashy, but was soft and thin; it didn’t overwhelm the fish, but instead danced with it and let it shine through. The two were an almost perfect match for each other. The tartar came in and gave the duo a tangy jolt.

The potato pancakes were of a darker tint, but they weren’t crispy or burnt. Instead, they were soft but also held together firmly, offering an appealing chewiness. There was some sweetness to them as well, and they had enough flavor to make syrup, applesauce, or ketchup unnecessary. The rye bread was a standard marbled variety with a salted crust, while the coleslaw had a lighter cream, consisted mainly of green cabbage, and had a dash of pepper. 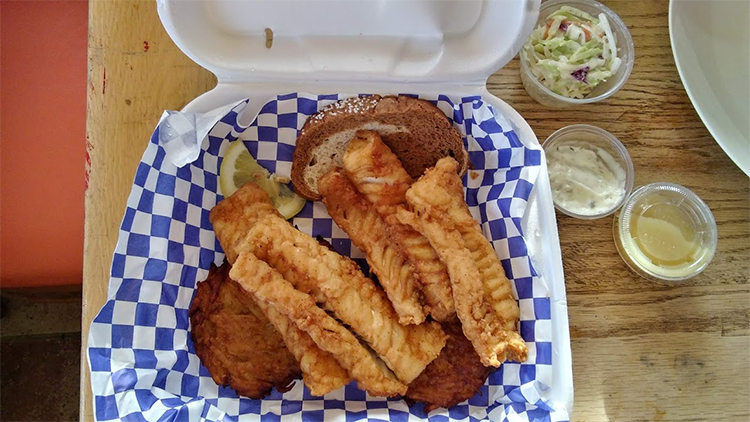 Overall, Scotty’s Bar & Pizza has a pretty all right fish fry for a pizza joint. I’ve been to plenty of places that have fish frys as their main Friday focus that don’t do it as well as this place that spends most of their time on pizza. Both the fish and pancakes should at least be satisfactory, if not memorable, for anyone who makes a stop. As for The Fish Monger, I plan on trying one at some point. But the next time I attempt to get one I’m putting my order in early and heading out right away.

Takeaways: Solid Old Fashioned but the bartender put too much cherry juice and not enough brandy in it; I almost ate something called The Fish Monger but I balked and then made 124 phone calls in 41 minutes before giving up on it—for now; the meaty fish and light breading complemented each other; tangy tartar; soft, delectably chewy, and mildly sweet pancakes; Scotty’s is currently giving away a free grilled cheese sandwich and cup of soup lunch to kids from 11 a.m. – 1 p.m. and that is awesome; they should change their name to Scotty’s Bar & Pizza & Fish Fry. 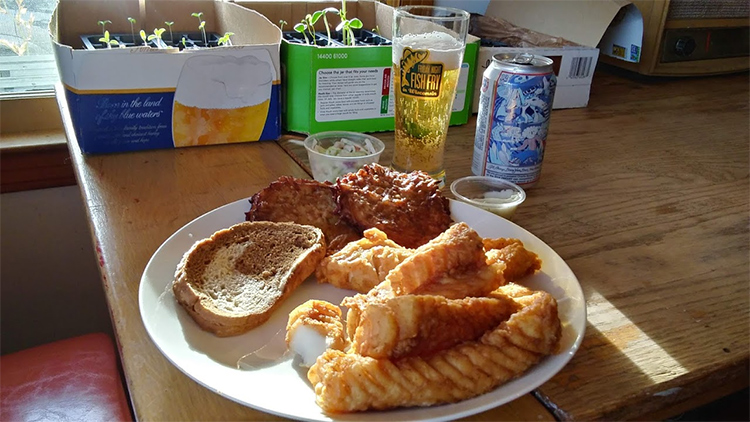