Well, it happened. Someone took the “Seriously, ask him to be in your band” line in my “About the Author” section seriously. I was contacted by Devils Teeth a handful of months ago, and have been jamming with them since. This past Friday I played my first show with the band, on what was the sixth anniversary of my moving to Milwaukee. Being that the show was at the Riverwest Public House, and that I had previously said I would return to the neighborhood for fish, I met a couple of the band members at The Tracks Tavern & Grill prior to the show.

The Tracks Tavern & Grill has gone by many names throughout the years, but has always served up drinks of some sort. Per the City Assessor’s website, the building was built in 1906, and was originally owned by Martin Kosiedowski. According to the city directories, it was still in the Kosiedowski family during the early years of Prohibition, when “soft drinks” were served. It changed hands and names over the following decades, before holding a series of train-themed names: Switch Inn Tavern, Red Lantern Lounge Tavern (one stops at red lights, of course), Across the Tracks Tavern, and finally, by the early 1970s, The Tracks Tavern.

But why all train names? Today people can be found running and jogging on the nearby Beerline Trail, but where there now is a trail, there once were tracks. According to an April 2010 Milwaukee Journal Sentinel caption, “The six-mile stretch hauled more freight than many cross-country railroads. It linked foundries, machine-tool shops, lumberyards, tanneries,” and other factories. Of course, it wasn’t called the “Foundry Line” or “Tannery Line,” it was called the Beer Line! Art Harnack’s book, The Milwaukee Road’s Beer Line, states that brewery traffic made up over half of the line’s traffic, giving it its name. The train tracks crossed Humboldt Avenue at Locust Street, right outside of The Tracks, and hugged the west bank of the Milwaukee River all the way to downtown. By the mid-1970s the trains began running less and less, and stopped running altogether in the 1990s.

As I settled in and perused the menu, I noticed that not only are fish frys available at The Tracks on Fridays, but they are available on Wednesdays as well. There are three fish fry options: The Classic for $9.95, which comes with a choice of perch, pollack, broiled pollack, or shrimp; The Combo for $10.95, which comes with a choice of two of perch, pollack, and shrimp; and The Fisherman’s Delight for $11.95, which comes with pollack, perch, and shrimp, “because choosing is for suckers.” Pollack or shrimp tacos are also available, as is a pollack sandwich. I ended up going with the Fisherman’s Delight. I meant to order a cup of clam chowder, but accidentally ordered a bowl instead. “A bowl?” the waitress asked; I almost changed my order, but soon realized I had made a very good mistake. The homemade chowder was packed full of vegetables, including carrots, corn, celery, and potatoes. There was an ample amount of clam to boot, and the flavor was excellent. 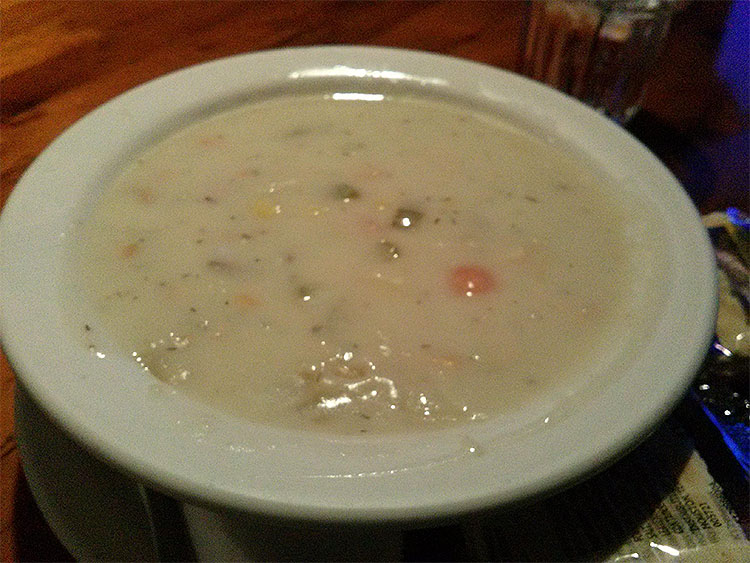 It was another week where the fish itself was solid, but most of the rest of the meal seemed like an afterthought. The perch fillets were quite large, so being that there were only two of them really didn’t bother me. There were two pollack pieces as well, and although pollack is very similar to cod, it was nice to have a little variation from the standard fish you see at most restaurants. Both of the fish—as well as the shrimp—get relatively high marks for taste and texture. The fish was accompanied with a rather memorable tartar, which managed to be sweet, while at the same being a little strong, because of the chopped green onions that were in it. The fries were on the bottom of the basket, hidden underneath the fish, and weren’t too exciting—they were straight cut and a little greasy. It’s worth mentioning that tater tots were another option, but potato pancakes were not. The coleslaw came in a container the same size as the one that was used for the tartar sauce, and was fine, but there wasn’t much going on there. Finally, the rye bread could best be described as cute—it was almost the same size as the lemon wedge. “Cute” isn’t a characteristic I seek out in rye bread though.

The Beer Line did much to add vibrance to Milwaukee’s economy for decades upon decades, and The Tracks Tavern & Grill is a living monument to it. This history was not lost on me during my visit. A locomotive with a headlamp blazing into the night is painted on the sign that hangs from the front of the building. May it shine for years to come, and may The Tracks continue be a red lantern for fish fry travelers. 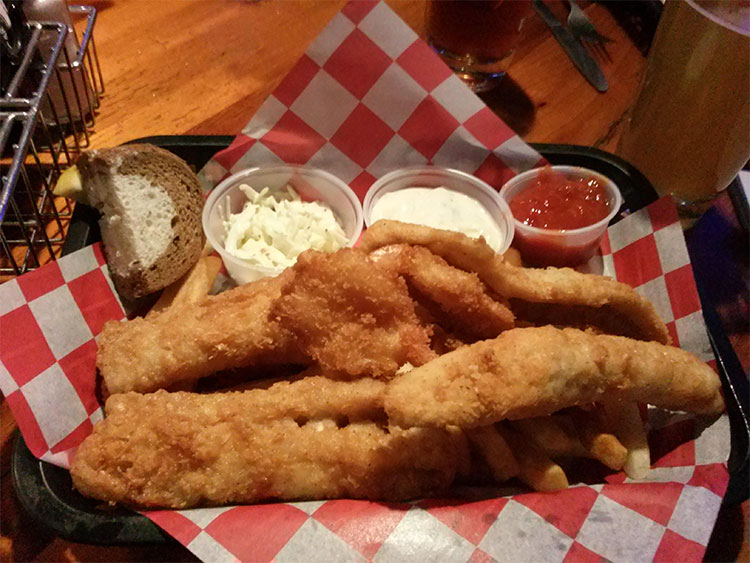 Takeaways: Fish fry available on Wednesdays and Fridays; robust homemade chowder; fulfilling fish; decent tartar sauce; nothing too exciting with fries, coleslaw, or rye bread; historic building close to a historic rail line; also, in 1977, some Pabst deliverymen were inside The Tracks when a guy stole the delivery truck and rammed it into nine parked cars, one of which was a Corvette, which it landed on top of. He told police that the keys shouldn’t have been left in the truck and “It was tempting; I couldn’t resist.” I don’t know why this is relevant, but it is.