So-called “horror hosts” are nowhere near as ubiquitous as they once were, but a few of them are still hanging around, undead and unkillable like the zombies that populate so many of their films. Flip on MeTV on a Friday night and you’ll see Svengoolie yukking it up during classic Universal monster movies; flip on the internet and you’ll bump into Elvira, Mistress of the Dark, who, after nearly four decades, is still cracking wise and being generally awesome. Even former Vice President Joe Biden would agree.

Speaking of Elvira (real name Cassandra Peterson), here’s Milwaukee’s very own Elvira look-alike in a Partyland commercial from 1985. Yes, Milwaukee had something of an “official” Elvira look-alike back in ’85, as confirmed by the Mistress of the Dark herself. And here she is, promoting a handful of personal appearances at Milwaukee-area Partyland stores:

So who was/is this Milwaukee “Fakevira”? She appears to be Cyndy Peterson, who, in 1985, was a 22-year-old student at UWM. In a UWM Post story from that year, Peterson is described as a winner of an Elvira look-alike contest put on by TV24 and 93QFM. Here’s that story, darlings:

TV24 and 93QFM recently received over 75 photo entries for the Elvira look alike contest. Eight semi-finalists were chosen and, after a small “screen test,” three finalists were selected by a panel of judges.

The three finalists appeared in pre-taped segments during “Elvira’s Movie Macabre” on Feb. 16. Viewers were asked to call in their choices for the Elvira look alike; Peterson, 22, won with an overwhelming majority.

In several phone conversations with Peterson she demonstrated many of the vocal characteristics that have become indicative of the real Elvira.

“I was in bed with the stomach flu when I saw the ad for the contest,” Peterson said. “I just kinda laughed. ‘This ought to be fun,’ I said to myself.”

Peterson described Elvira as “sorta like an alter-ego.” She said that, because part of her is Elvira, she had an easier time picking up the speech patterns.

Actually, Peterson has already had some experience as Elvira. She was the “Mistress of Darkness” this past Halloween, she said, which gave her some practice for the real thing.

The 5-foot-6, 110-pound Peterson figured one of the reasons she was chosen as a finalist—aside from her obvious attributes— was because the real Elvira’s name is Cassandra Peterson.

“Maybe they thought I was family,” she said.

The decision to enter the contest, spend the money on a costume, and go through all the trouble, Peterson explained, was because “it was a crazy diversion. And crazy diversions are the most pleasurable diversions in life,” she said. The real Elvira couldn’t have put it any better herself.

Peterson’s pre-taped segments were aired on TV24 last Saturday night, during the movie “The Night Evelyn Came Out Of the Grave.” When contacted during the movie she said her friends were pretty distracted.

“No one is watching this turkey—it’s really bad,” she said, true to form.

Even if her friends weren’t watching the movie, they were behind her the whole time giving lots of encouragement and support. They, and her boyfriend Mike, knew all along she had a chance to win the contest, the RCA Colortrak 13″ television set, and the guest-hostess position.

Peterson said that she was very nervous when she did the taping, but everyone was so nice that they made her feel very comfortable.

“The studio had become like a second home to me,” she said.

In one of her segments during the movie, Peterson, in complete character, told the audience, “I want to thank all of you who had the good sense to vote for me.” Then she rolled her eyes as only Elvira can.

The final credits for TV24’s “Elvira Look-Alike Movie Macabre” listed the production company responsible for the show as “A Rank Amateur Production.” But this Elvira was no rank amateur. 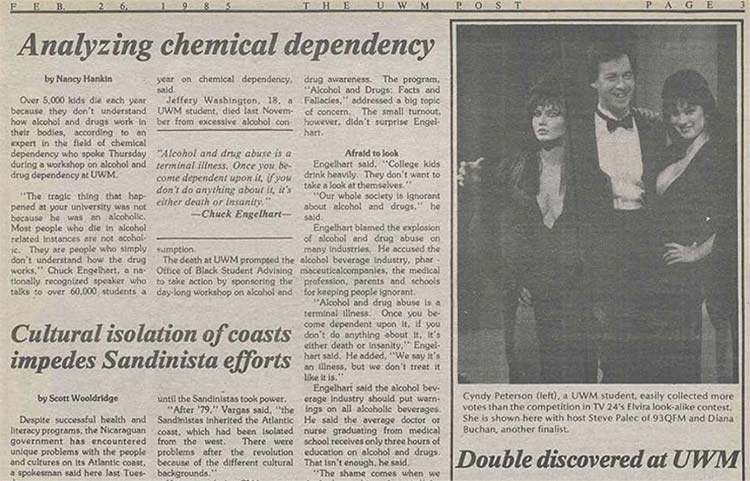