These are the familiar sounds after a Milwaukee Brewers home run at Miller Park. For fans, this is a time to celebrate and have fun. For others, this is a time to get to work. Bernie Brewer—the official mascot of the Brew Crew—treats these sounds as part of his occupation.

Located above the left field bleachers, Bernie can be seen cheering, dancing, or waving a Brewers flag from the porch of his dugout dwelling. When the Brewers homer, Bernie gracefully takes off down a winding yellow slide as the fans go wild.

Bernie Brewer first came alive in 1970. County Stadium was in need of supporters for Milwaukee’s new Major League team, the then-American League Milwaukee Brewers, following the tragic departure of the Braves five years earlier. Attendance at games had taken a big hit with the absence of a big league team for half a decade. Add to that a new team and the loss of any previous N.L. rivalries, and it’s safe to say interest was waning. So Milt Mason stepped up to rally the city behind the new team when he became the first Bernie at age 69. A retired aviation engineer, Mason’s fandom soared as he sat atop the scoreboard in a trailer—vowing not to come down until attendance reached 40,000 at the ballpark. With support from the Brewers organization, Mason sat above and lived in the specially constructed trailer decked out with a television, exercise bike, gas stove, refrigerator, and a telephone. While Mason occupied his perch and rallied fans to cheer on the team, he consistently wore traditional German attire, including a uniform. Not unlike many other Brewers fans, he drank beer during games.

On August 16 of that year, Mason’s goal was met when 44,387 fans attended the game for “Bat Day”—a baseball bat giveaway to all fans in attendance. To celebrate, he swung down from his trailer onto the field from a 30-foot rope while the crowd cheered. After the strike, the adventurous Mason said, “It was a great experience but I wouldn’t do it again. I have no complaints. I don’t like to do anything twice. I like to try new things.”

Milt’s protest was over and local residents continued to come to games. It seems that his stint in the trailer created enough buzz to get locals to try and embrace the new team. After that fateful day he came down on the rope, he could be seen walking around the stadium, drinking beer and talking to fans. Mason passed away three years later and as a tribute to his dedication, the team made Bernie Brewer their official mascot.

With Mason’s trailer gone, a new home was constructed for the mascot—Bernie’s Chalet—in the center field bleachers. During games, Bernie would slip down a slide into a beer stein to celebrate home runs and wins. The crowds loved Bernie so much that in 1973 he had a female companion, Bonnie Brewer. Donna Bozmoski was the first Bonnie—a young blonde-haired girl dressed in a gold blouse and skirt-like lederhosen. While she only served as a Brewers mascot for five years, Bonnie amused crowds by “sweeping” the bases during the seventh inning stretch. She was also remembered for spanking the opposing team’s third base coach and sometimes kissing him on the cheek. After her courtship with Bernie ended and her mascot days were over, Bonnie made one more appearance, in September 2000, where she returned during the final home games at County Stadium. 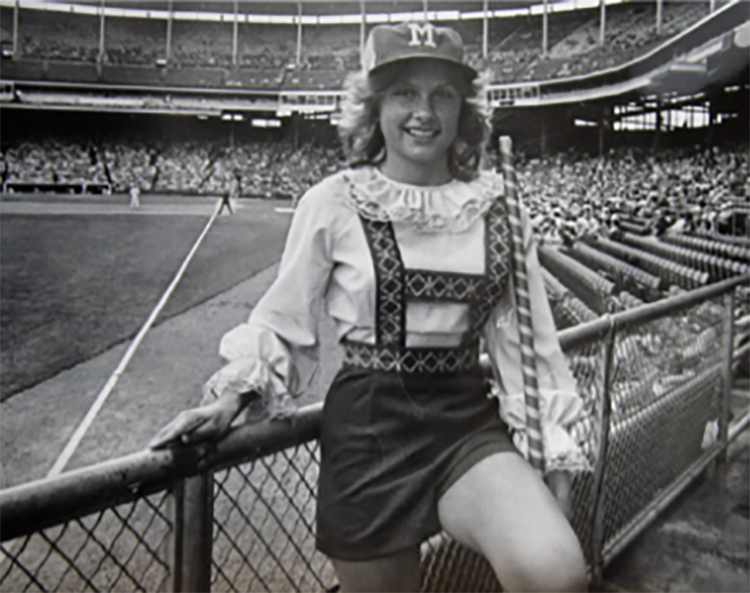 Bernie continued on for many years as the dearly adored mascot for the team. However, the Chalet was taken down during renovations in 1984 and a sound tower was built in its place. The mascot retired. But as many Wisconsinites know, Bernie’s Chalet found a new home at Lakefront Brewery. Lakefront proudly displays the Chalet, and allows visitors to enter and take photos of Bernie’s former home during their brewery tours.

The team played on, but Bernie was missed by the local population. After a fan vote, the Milwaukee Brewers brought back their beloved mascot in 1993 following a nine-season absence. The cheering and dancing Brewer has been a staple at home games ever since. When Miller Park opened in 2001, Bernie’s Dugout (a permanent home for the mascot in left field) was also erected. Even at the tail end of a disappointing Brewers season, the love for the team’s mustachioed mascot remains strong. He has merchandise from t-shirts to bobbleheads.

However, controversy has stirred over Bernie’s Dugout. Some years ago, an online petition was started pleading with the Brewers organization to bring back the old chalet and, once again, allow Bernie to slide into a hulking beer stein. According to a 2007 New York Times article, Brewers executive vice president for business operations Rick Schlesinger said, “We’re considering the possibility of bringing back Bernie’s beer mug, but we haven’t made any determinations yet. Quite frankly, we have a lot of other projects that have a higher priority.” The online petition has since been removed and the demand has died down.

Milt Mason, as a byproduct of his intense fandom and determination, created a mascot that has withstood decades of change (and temporary removal) and remains a ballpark favorite in Milwaukee and throughout the league to this day. After nine years away, it’s safe to say that Bernie Brewer is here to stay, so let’s cheers to that!