In 2006, Bayshore Town Center opened in Glendale. The new-and-improved retail center was the result of a two-year, $300 million project that transformed the aging Bayshore Mall—first built in 1954—into a much-ballyhooed town center. Streets, sidewalks, a public square, office space, and residential units were added. The area’s first Apple store and Trader Joe’s made their debuts. An iPic movie theater and an adjoining bowling alley got in on the fun. You could live there. Suddenly, visiting Bayshore was less like going shopping and more like strolling through a quaint little town—or, at the very least, a Hollywood backlot made to look like a quaint little town. It was shiny. It was new. It was great. 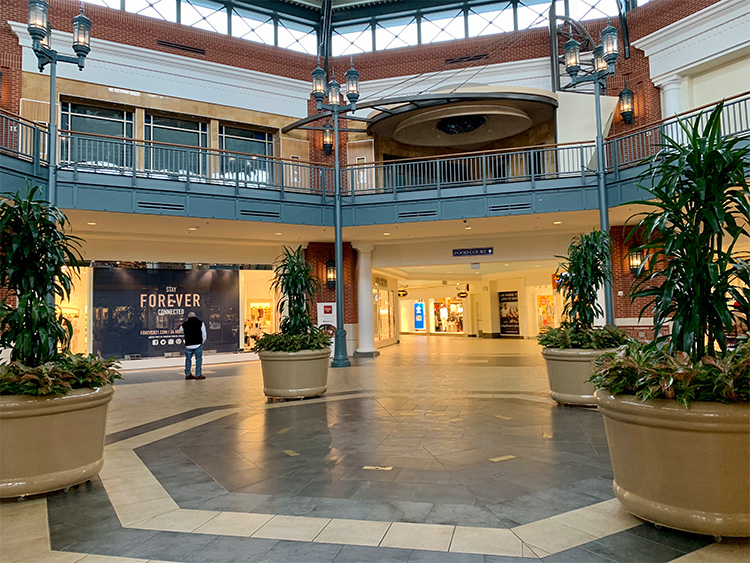 No, this piece is about Bayshore’s latest highly touted, years-in-the-making redevelopment. Yes, in case you somehow missed it, Bayshore is about to reinvent and reinvigorate itself yet again! And how will it do this? By, um, getting some new stores. And, uh, getting a movie theater to replace the old movie theater that closed in 2018. And, er, adding some lawn furniture to its public square. Also, bags.

Behold! The tastefully rendered fruits of a $55-$75 million renovation project that includes a public funding subsidy of up to $36.7 million if the thing takes off! A big flat screen TV! With summer football! 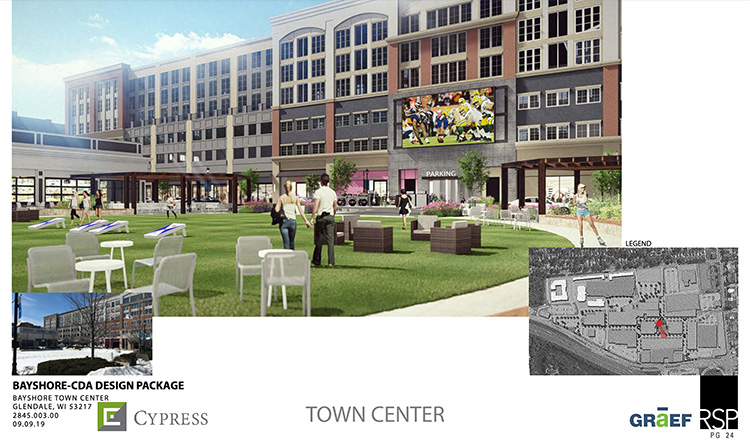 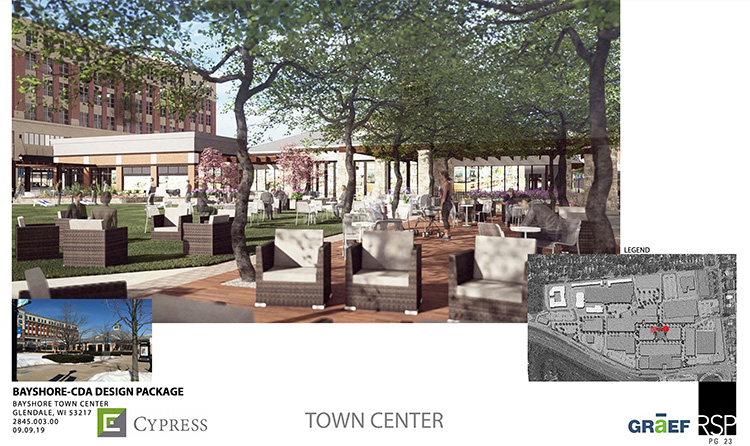 Before we get to the stuff that I find utterly bewildering about the latest Bayshore redevelopment, let’s talk about the stuff that makes sense. The overall vision is to downsize the mall’s retail space by nearly half, and demolish or convert what’s left into multi-family residential units, senior housing, a “select service” hotel, a medical facility, restaurants, and more office space. The Milwaukee Business Journal elaborates:

Mall manager Cypress Equities, which works on behalf of Bayshore owner AIG Global Real Estate Services, plans to reduce the square footage of the complex devoted to retail. Dallas-based Cypress seeks to take Bayshore from 1.2 million square feet to 900,000. It also wants to eliminate about 37% of its approximately 829,000 square feet currently used for retail.

According to Kirk Williams, Cypress’ managing director of large asset redevelopment, the work addresses mistakes developers made in the past.

“The biggest movement on retail was to densify the site, to try to put as much retail as you could possibly put,” he said. “Then we went to mixed-use, and so we would identify areas where we could put in retail, we put in office, we put in residential.”

This makes perfect sense. People not shopping the way they used to? Let’s lose all the empty mall space and double down on the things that make Bayshore Town Center a town center! Perfect!

And that’s just the beginning of the confusion. Unless I’m missing something, the rest of Bayshore’s big redevelopment plan is to get things it once had, or, in at least one case, get something it still has.

Remember when Bayshore had stores and stuff? Well, the new Bayshore will have…stores and stuff. Total Wine & More will set up shop in the old Sports Authority space! The former iPic/bowling alley entertainment center will become another entertainment center! The indoor rotunda portion of the mall will have a makerspace and an espresso bar! An espresso bar! Yes, this is a $55-$75 million redevelopment plan that proudly touts a new espresso bar as one of its key features. 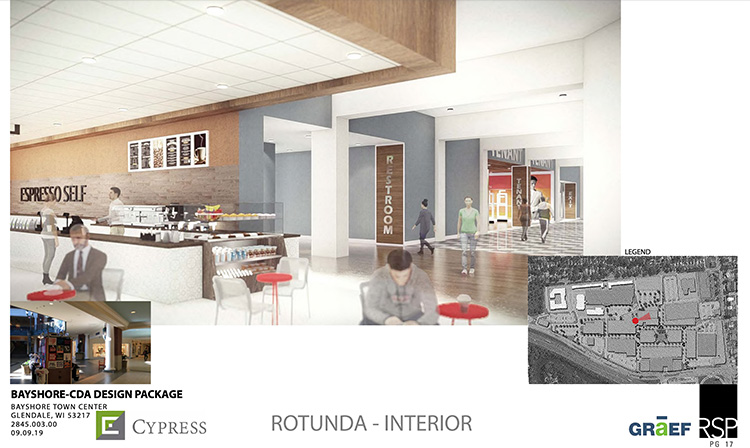 Most confusing of all is the mall’s public square, which will be reimagined as—you guessed it—a public square. If renderings are to be believed, outdoor lawn furniture will replace the pre-existing outdoor lawn furniture, and there’ll be a big TV and some bags someone bought one summer for camping. Here’s what BizTimes has to say about the matter:

Another focal point is the mall’s centralized public square, an open green area that sports a fountain in the summer and a Christmas tree during the holidays. Currently, the square sits about three feet below street level and is surrounded by large planters, disconnecting it from surrounding restaurants and passers-by. Cypress plans to raise and open the space to better connect it with the rest of the mall, Williams said.

Just imagine all the incredibly well-paid people who concluded Bayshore’s public square was underused because of some steps and planters.

Oh, apropos of nothing, here’s a steel drum band doing Nirvana’s “In Bloom” last year at the Bayshore food court:

Again, the “right-sizing” of Bayshore’s retail space makes perfect sense. But the rest of the plan seems so half-hearted, so redundant. It’s less “reimagining” and more “general sprucing up.” It reminds me of the endless redevelopment talk that swirled around the Shops of Grand Avenue for years, talk that basically amounted to “Get better stores?”

Of course, the Grand Ave. is currently—and finally—in the throes of a true reinvention. Retail will more or less be eliminated in favor of residential space, office space, and a food hall. “The Avenue” looks to be something new. “Bayshore” looks a lot like Bayshore. 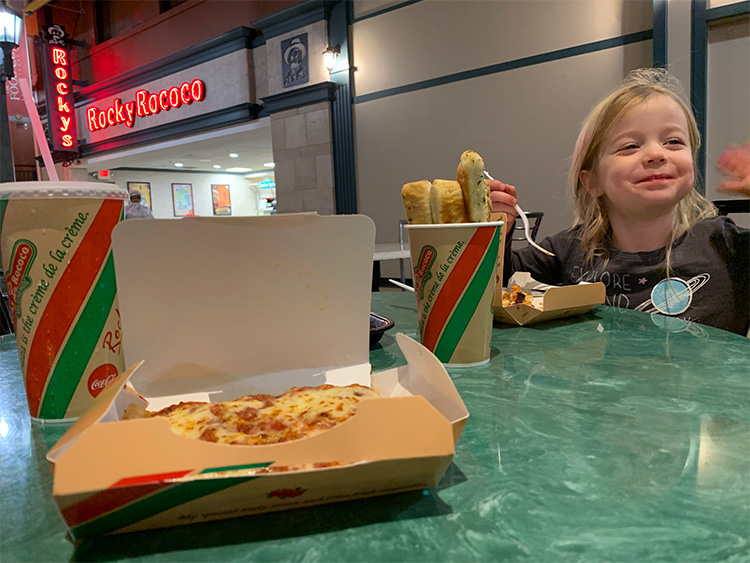