Today in Everyone’s Angry And No One Wins news, Milwaukee’s venerable Serb Hall is ruffling feathers with its recent decision to remove some Very Important presidential portraits from its hallowed walls. Will Serb Hall survive? Will Milwaukee survive? Will “political correctness” continue to “kill” our nation? LET’S FIND OUT.

Over the summer, an unidentified individual or group complained that seven presidential portraits in Serb Hall—commissioned in the 1980s, and representing both Democrats and Republicans dating back to Dwight D. Eisenhower—were all white men. Which, if you follow presidential history, has been a thing 44 out of 45 times. (Let’s get to further chipping away at that ratio, shall we?) Why wasn’t President Obama included? Because the portraits represented presidents who had visited Serb Hall. Obama, it seems, never walked through Serb Hall’s doors and enjoyed its fish fry. Even so, Serb Hall removed the portraits during a summer repainting job. Oh well. The end.

Except not, of course. According to WISN12, former Milwaukee County Board Supervisor Kathy Arciszewski isn’t pleased with the decision. “Politically correct isn’t always correct,” she told the station. “To me, to have to take them down, to apologize for our history is a mistake.” And, according to an on-brand crotchety/colorful statement from crotchety/colorful Ald. Bob Donovan, it’s all just another sign that “political correctness is killing our nation.”

Shame on Serb Hall for turning their back on decades of American History
Statement from Alderman Bob Donovan
September 18, 2019

The news that Serb Hall has removed the portraits of U.S. Presidents from its “Hall of Presidents” to me is “Exhibit A” of how political correctness is killing our nation.

The portraits—showing Democrat and Republican Presidents who have spoken at Serb Hall dating back to President Dwight D. Eisenhower—were recently removed after complaints that they did not show President Obama and thus were not diverse enough.

It is outrageous to me that Serb Hall has caved in on this issue, and equally outrageous how absolutely stupid people have become.

I have an idea: How about we pressure Serb Hall to reconsider the name of their facility and demand that it be renamed “The People’s Hall”?!

For the life of me I cannot believe the lengths to which people will go to be politically correct, and I honestly fear for what the future will bring.

See you soon for a fish fry at The People’s Hall!

We disagree with Donovan 99% of the time, but boy oh boy will we miss clearly-written-in-the-middle-of-the-night statements like that.

In other Everyone’s Angry And No One Wins news, Shorewood wants to ban all holiday decorations on public property. In other Bob Donavan/”People’s” news, remember when he designed his own People’s Flag? 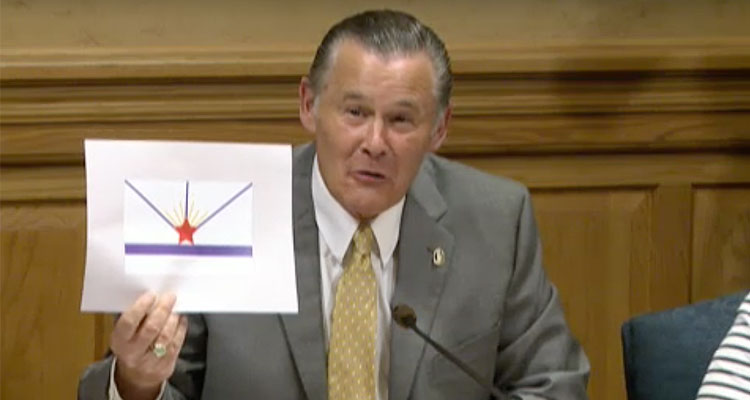