Thursday’s Steering and Rules Committee meeting about Milwaukee officially adopting the “People’s Flag of Milwaukee” didn’t go the way the folks behind the “People’s Flag of Milwaukee” had planned. What started as a chummy, chuckle-filled meeting—”People’s Flag” backers Steve Kodis, Robert Lenz, Ken Hanson, and Drew Lettner were clearly feeling good about their “brand”-focused presentation—quickly turned into something else. Alders Bob Bauman, Chantia Lewis, Russell Stamper, and others raised objections to the process surrounding the “People’s Flag,” deeming it—to quote the Shepherd Express—”racially exclusionary and unoriginal.” The meeting ended with a 6-2 vote to punt the matter to the Milwaukee Arts Board, which will be expected to weigh in by December 31.

But never mind that, because the real takeaway from yesterday’s meeting was this: Back in 2016, Ald. Bob Donovan not only submitted a design for the “People’s Flag,” but he was the first person to do so. Huh!

“The very first submission we received in this process was Ald. Bob Donovan,” Kodis revealed.

“It was three rivers, and the lake, and…but that’s fine, no one listens to me!” Donovan said, producing a copy of the design and showing it to the crowd.

“If you hadn’t done it in crayon, it probably would have made it farther,” Council President Ashanti Hamilton joked, no doubt referencing the “5 basic principles of flag design.”

Even though Donovan voted to send the matter to the Arts Board, he is clearly a big fan of the “People’s Flag.” (He was a sponsor of the original resolution to adopt it, but he ended up removing his name.) At Thursday’s meeting, he had nothing but compliments for the group behind the flag.

“My hat’s off to you,” he said. “You’ve galvanized parts of this community in a way that I haven’t seen in a long time. I applaud that. I wish you guys the best and we’ll see what happens six months from now, but I’m certainly leaning towards supporting this.” 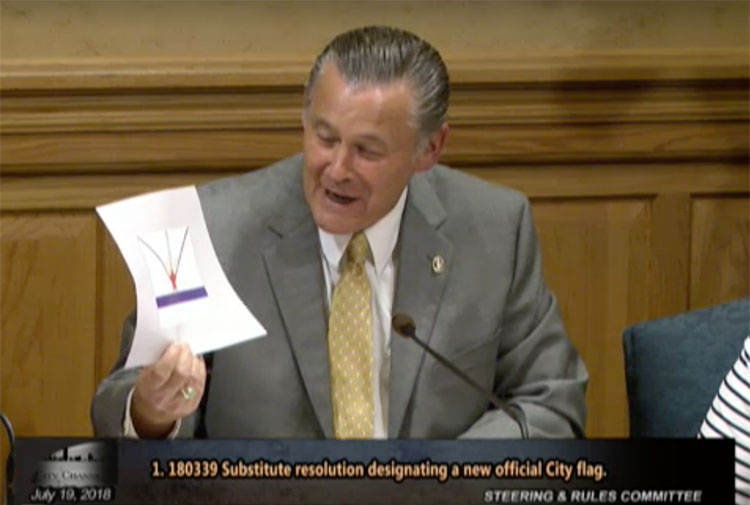