Remember when the end of summer was also kinda-sorta the end of Milwaukee’s festival season? Those were simpler (and much more boring) times. Thankfully, as live, in-person events are starting to return in a big way, the city’s already-bursting list of festivals, block parties, and other ambitious entertainment undertakings is extending well into autumn. As you get ready to have an awesome autumn, Here is Milwaukee Record’s fall festival guide.

September 24-26
Milwaukee Paranormal Conference @ various locations
After an online-only 2020, the Milwaukee Paranormal Conference is back! The weekend celebration of the strange and unusual is set to take place September 24-26 at various locations in and around Milwaukee. (The bulk of the con will take place at Alverno College.) The theme for this year’s con is “Wisconsin, Good Land of Paranormal.” Expect plenty of panels on Milwaukee-based poltergeists, the “Lake Michigan Triangle,” and, yes, the fabled Haunchyville. Will there be a Haunchyville coloring sheet to go along with the “Voyage to Haunchyville” panel? YES.

September 25
Fromm Petfest @ Henry Maier Festival Park
Following a one-year FURlough (sorry!) in 2020, Fromm Petfest returns to the Summerfest grounds for a day of fun for the whole family…including four-legged family members. The annual animal-focused event will take place from 10 a.m. to 6 p.m. and it’s free to attend.

October 2
The Lowdown @ Indeed Brewing Company
For the third straight year, Indeed Brewing Company will host The Lowdown inside and outside of its Walker’s Point taproom. From noon to 11 p.m. on Saturday, October 2, the brewery will shut down a portion of Second Street for an all-day festival featuring tasty beer (some of which is event-exclusive!), great music, and fall fun. There will also be live art from Jeff Redmon, on-site food from Twisted Plants, and “The Beer Brûlée Experience” in which hot fire pokers are used to caramelize pints of beer. Oh, and there will also be live music from the likes of You Win !!!, Browns Crew, Chicken Wire Empire, Dropbear Collective, and a remote broadcast by The Boogie Bang.

Autumn Block Party @ Enlightened Brewing Company
The last block party Enlightened Brewing Company will host this year will be an especially good one. The Bay View brewery will serve up great beers (including its new Cosmic Hazy IPA, three new varieties from its “Rough Draught” series, and some obscure brews from its cellar), tasty treats from Vanguard, and tunes from Sweet Sheiks and The Westerlees.

October 3
Brady Street Pet Parade @ Brady Street
After an all-virtual parade in 2020, the city’s finest good boys, pretty girls, and parrots (and their human companions) will once again have a chance to strut their stuff in the flesh/fur. The family-friendly event will run from 11 a.m. until 4 p.m. The parade, which starts at 1 p.m., will head west from Brady Street and Franklin Place to Cass Street. Then, it will head south to St. Rita’s Catholic Church, 1601 N. Cass St., for the pet blessing by Father Tim Kitzke of St. Hedwig Three Holy Women Parish. There will be prizes and music, too! Will FOX6’s Ted Perry and Gothic Milwaukee’s Anna Laridnois serve as celebrity judges? Yes. Will Trapper Schoepp provide post-parade live music? Yes. Oh, and Milwaukee Record‘s own Matt Wild will be the emcee.

October 3-10
Milwaukee Comedy Festival @ The Laughing Tap (and other locations)
Following an abbreviated 2020 edition that featured fewer shows, far smaller audiences, a more localized lineup, and many more protective face coverings than ever before, Milwaukee Comedy Festival is getting back to normal in 2021. This year’s festival is scheduled to return to The Laughing Tap (and other area venues) October 3-10. While the full lineup and the entire list of shows isn’t known quite yet, the state’s largest and longest-running comedy festival has announced Neil Hamburger, Myq Kaplan, and Lara Beitz as headliners.

October 8-9
PridetoberFest @ Henry Maier Festival Grounds
Described as a “scaled-back version” of PrideFest (which is normally held in June), the two-day PridetoberFest will occupy a smaller chunk of the Summerfest grounds, but will still “activate multiple stages that engage a diverse lineup of entertainment with a particular focus on local acts, performers, and shows.” And yes, There Will Be Food Trucks.

October 9
Beet Street Harvest Festival @ Cactus Club
Following four years of family-friendly, fall-focused fun (and taking 2020 off for pandemic-related reasons), Cactus Club has decided to bring its Beet Street Harvest Festival back for another installment. On Saturday, October 9, the Bay View bar will host a day of food, drinks, live music, and festival fun for all ages. That day, a chunk of Wentworth Avenue between Goodkind and Cactus Club will be blocked off for the fifth annual event. Among the acts confirmed to play Beet Street so far are Frankie & The Witch Fingers out of Los Angeles and Acid Dad from New York.

December 4-5
Mama Tried Motorcycle Show @ The Rave
Last March, Mama Tried (and its affiliated festivities) was among the first Milwaukee events canceled on account of COVID concerns. At long last, the sprawling indoor invitational that showcases an amazing array of more than 200 custom-built bikes will return to The Rave for two days of chopper-related celebration December 4-5. And don’t forget about Flat Out Friday at Fiserv Forum on December 3 and various other Mama Tried-affiliated events TBA.

December 5
Hover Craft @ The Pritzlaff Building
Since 2009, Hover Craft has brought skilled local artists, crafters, retailers, and others residing beneath the broad “maker” umbrella together to bring Milwaukee-made goods to area consumers during the holiday season. Like pretty much every event happening in or around the city, Hover Craft canceled its 2020 event on account of COVID-19 concerns. However, it’ll return to The Pritzlaff Building on Sunday, December 5. 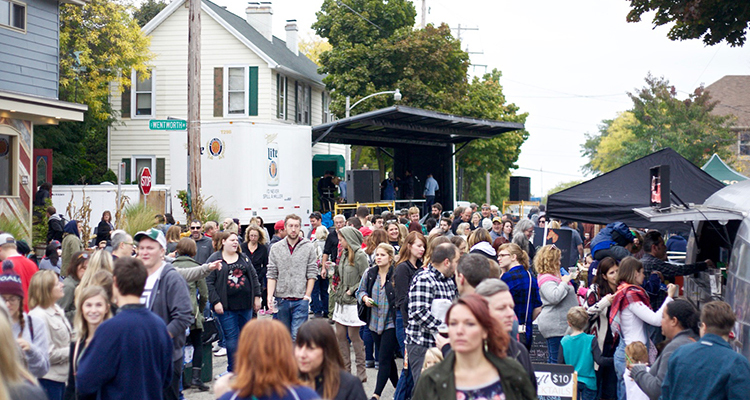