Even if you don’t know the name Ryan Mason, it’s quite possible you’ve seen him perform. The Milwaukee comedian has opened for the likes of Kumail Nanjiani, Brian Posehn, Morgan Murphy, Joe Mande, and countless other humorists with household names. When he’s not prepping audiences for notable national comics or touring the Midwest, Mason is helping to boost Milwaukee’s already-burgeoning stand-up scene by improving every show he’s on, and helping to produce a few local showcases as well.

Thursday night, Mason will help launch Deep Space, a new comedy show that’s the sister showcase of Voyager (which he also co-produces). Before Deep Space lifts off, Milwaukee Record spoke to Mason about what he’s been up to since he moved back from Madison, how becoming a parent has impacted his comedy, his new reality TV podcast, and what people can expect to see at Deep Space.

Milwaukee Record: What have you been up to since the last time we spoke to you? Any memorable opening opportunities or out-of-town shows?

Ryan Mason: I closed out 2018 with some really strong shows, including the roast of Ramie Makhlouf and a show at Var Gallery that included Jackie Kashian. This year has been about traveling to new do new shows for new audiences. I had an awesome time in Chicago doing a show called Arguments And Grievances, which is a popular debate-style podcast. Most recently, I featured for a few days at a casino in Indiana.

MR: How has becoming a parent impacted the way you do comedy? Has it informed your material, and does it make you more careful about what shows you take on and how often you go up?

RM: My kids are basically a non-stop source of material. I am careful not to overwhelm audiences with my stories as a parent, but there are some things that are too good not to share. My youngest son recently ate a pistachio with the shell on. I am definitely more selective about shows that I agree to be on now. Some of the decision is about money, but mostly it’s about getting in front of good audiences. If I am going to spend time away from my family, then it needs to be productive.

MR: Why did you decide to start Deep Space? I know it’s in the same family as the Voyager show at Landmark, but what’s its theme and format? How does it differ from its sister show?

RM: I help to co-produce Voyager along with J Tyler Menz and Tim Higgins, and I think it is one of if not the best shows in the city. My goal with Deep Space was to create a similar show that highlights Voyager performers and allows us to bring in comedians that I meet on the road. Our theme is to explore the boundaries of comedy. I think that we will do this by bringing in unique standup acts and introducing elements of sketch comedy to the Voyager format. Also, because this is a ticketed show, we can pay performers to come from further away. Thus there will be no randomly-drawn “bucket” guest spots.

MR: What makes Hawthorne Coffee an ideal spot for this? To my knowledge, there aren’t usually shows there, so what made you want to host Deep Space there?

RM: When I saw the performance space at Hawthorne Coffee Roasters, I was really excited as a comedian. It checks a lot of the boxes of what you look for in a comedy venue—low ceilings, comfortable seating with tables, and a bar separate from the performing space. The event space has been used for other performances, including the Shakespeare Raw show that’s put on by Boozy Bard Productions. But this will be the first stand-up show. The real draw for me, though, is the owners, Kendra and Steve. They’re parents like me who are running an amazing business and they use Instagram to highlight fun things at their shop. I just like their vibe and the way they operate, plus Steve is a great bartender, which helps for comedy shows.

MR: What can people expect from this showcase, both this week and going forward?

RM: People can expect a professionally-curated experience. The show producers and Milwaukee Comedy are obsessed with making sure people have a fun and exciting time. As a traveling comedian, I see a lot of acts from all over and I’m stoked to bring my favorite performers to Milwaukee. This week, our out-of-town acts include Sabeen Sadiq from Chicago. I met Sabeen on a debate show where we squared off. We debated Michael Myers the serial murderer vs. Mike Myers the SNL alum. She’s a unique performer and someone that we haven’t seen in Milwaukee. Also on the bill is Brianna Murphy, another Chicago performer who has just an irresistible effervescence. Her act is so bright and charming, she’s someone I love running into at festivals and road gigs.

Hawthorne is going to do some space-themed cocktails and have one of the food trucks operating out of their facilities selling food. To me, it’s perfect. People can show up, grab a seat, and have a drink and a meal before watching the show.

MR: Offstage, you recently started a podcast with your wife where you watch reality TV with Milwaukee comedians. What’s your relationship with reality television, and what made you want to do Welcome To Reality instead of the umpteenth comedy-centric podcast?

RM: This was my wife, Nicole Toerpe Mason’s, idea. She’s a reality television junkie. When I get home from shows, a lot of times my wife will be up watching the Real Housewives, Big Brother, The Bachelor, or who knows what. Whenever I watch with her, I feel like I’m from another planet and I have a lot of really stupid questions. We have so much fun talking about “reality” that we thought we’d have some comics over, force them to watch these crazy shows and see what they think. Most comedians don’t watch a lot of television because of their schedules.

It has honestly been more fun than I would have imagined because these shows have such devoted followings. My wife structures our viewings around what is in the popular zeitgeist and we get a ton of downloads and social media interactions from fans. It is also hilarious to see comedians react to watching shows like 90 Day Fiancé for the first time. I just hope it turns people onto some of our performers here in Milwaukee. Milwaukee Record better watch out or my wife will make you guys watch Celebrity Big Brother UK.

MR: What else do you have coming up?


RM: I’ll be featuring for Ben Bailey from Cash Cab at Potawatomi Casino on Saturday, April 6. I’ll be recording an album next month, along with my co-producer and friend J Tyler Menz. It’s being billed under the event name “My Brew Dads” as a nod to the late ’80s sitcom My Two Dads that featured our comedy hero Paul Reiser. We are recording over two days at the Underground Collaborative on April 26 and 27. I’m performing all over, but one show I am really excited to be on is Comedians You Should Know in Chicago, which I will be on in July. I just think it’s one of the best shows going in the Midwest and I’m honored to be booked as a Milwaukee comedian.

You can see Ryan Mason perform at the first Deep Space show at Hawthorne Coffee Roasters on Thursday, March 21. The show starts at 8 p.m. Tickets costs $8 in advance and $10 at the door. 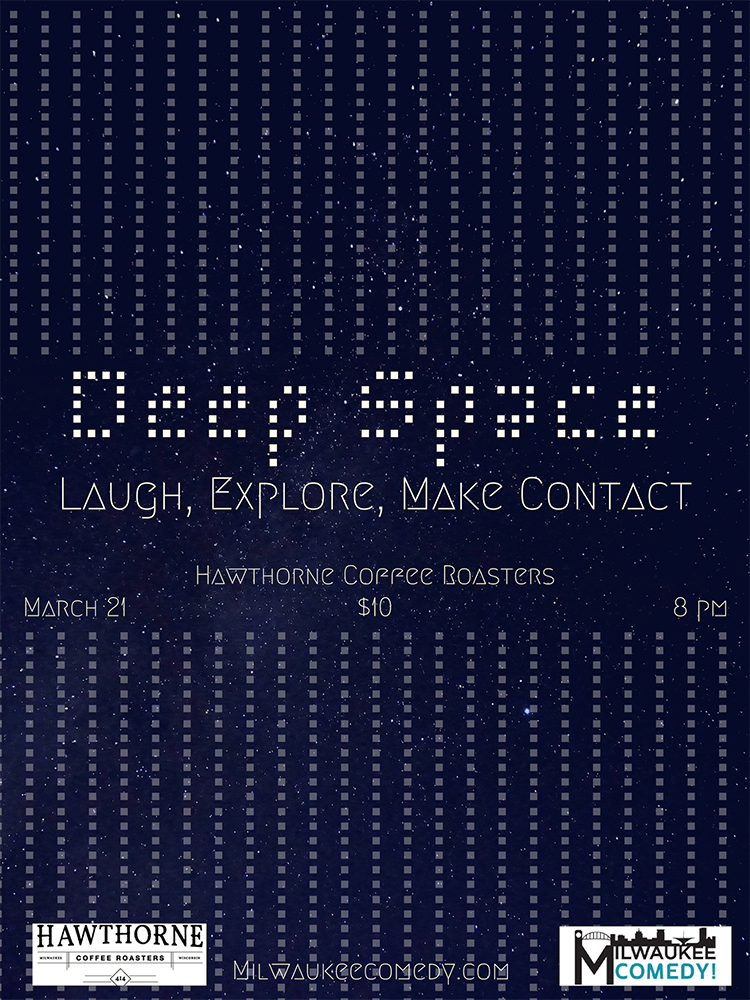