Summer in Milwaukee is the best; summer in the Midwest is even better. Join Milwaukee Record and Miller High Life as we search the city and beyond for the Spirit Of Summer. Today: Little Amerricka!

The first thing you notice about Little Amerricka is its name. The double Rs. The troubling K. Surely it hasn’t always been this way; surely there’s some sort of Berenstain/Berenstein Bears thing going on here. But no, it has always been this way. The name comes from the park’s late founder, Lee Merrrick, a longtime livestock renderer and dog-food plant owner who built Little Amerricka in the small town of Marshall, Wisconsin (population 4,000-ish) in 1991. “I used to drink and chase women,” Merrick once said. “Now I’ve got this (amusement) park as a hobby. I’ve never made a nickel on it.”

The second thing you notice about Little Amerricka is its size and scope. It’s about 11 acres. It has about 25 museum-piece kiddie rides. A Ferris Wheel, a Mad Mouse roller coaster, a Scrambler and a Tilt-A-Whirl. Bumper boats, mini-golf, a giant tiger slide and a monorail. Almost all were purchased at auction over the years by Merrick and general manager Darrell Klompmaker. And of course, there’s also the 1/3 size railroad with three miles of track that wind through the park and beyond. It’s all the best definition of “mom-and-pop,” the best definition of “quaint.”

The final thing you notice about Little Amerricka is that it’s next to a cemetery. There, looming behind the airplane ride, the boat ride, and the slushie stand is the town cemetery, an incongruous backdrop of tombstones and flowers and mourners. On one side, life; on the other, death. This is Little Amerricka, though it could just as easily be Little America. 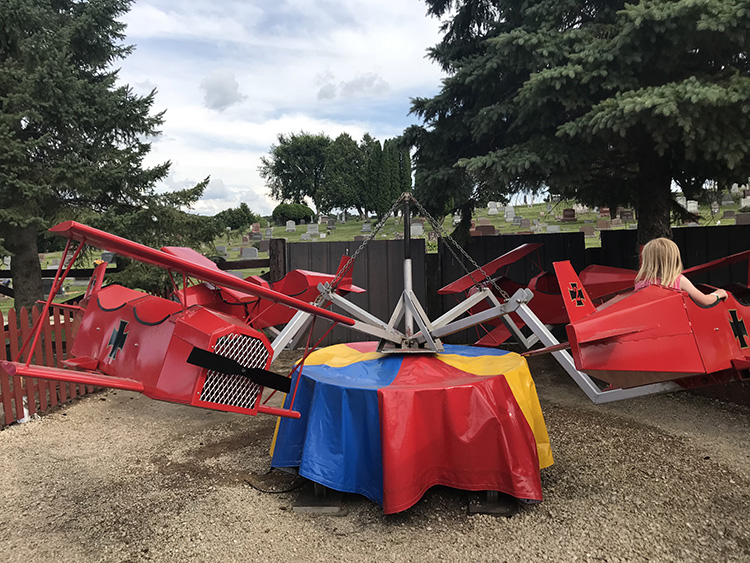 Is Little Amerricka worth the 66-mile drive from Milwaukee? If you’re on a budget, have a hankering for old-timey rides, and are in charge of a kid or kids in the 4-10 age range, absolutely. It’s remarkably cheap and parent-friendly. Both kids and adults only pay for what they ride: single ride tickets are $1.50 each; unlimited ride passes are $11.95, $13.95, $18.95, and $22.95. There’s a concession stand and plenty of random refreshments available throughout the park, but you can also bring your own food. Also, Klompmaker, who starred in the Little Amerricka commercials of the ’90s, totally just walks around the place like Walt Disney strolling through Disney World. 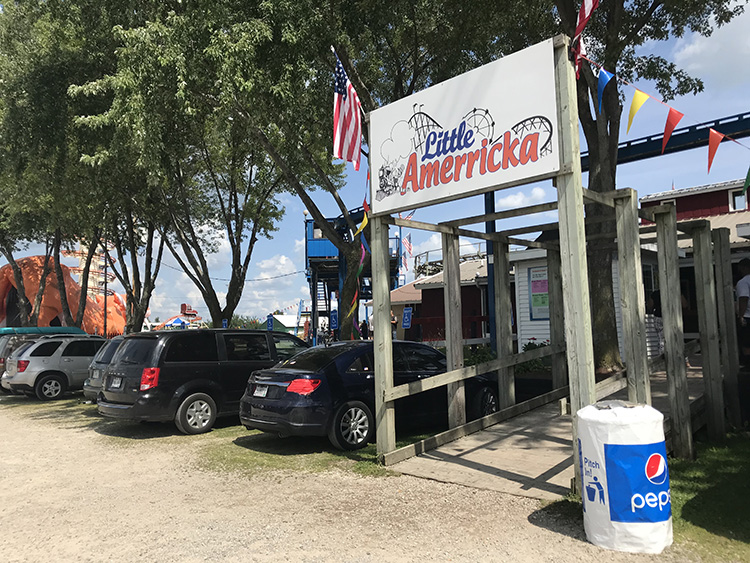 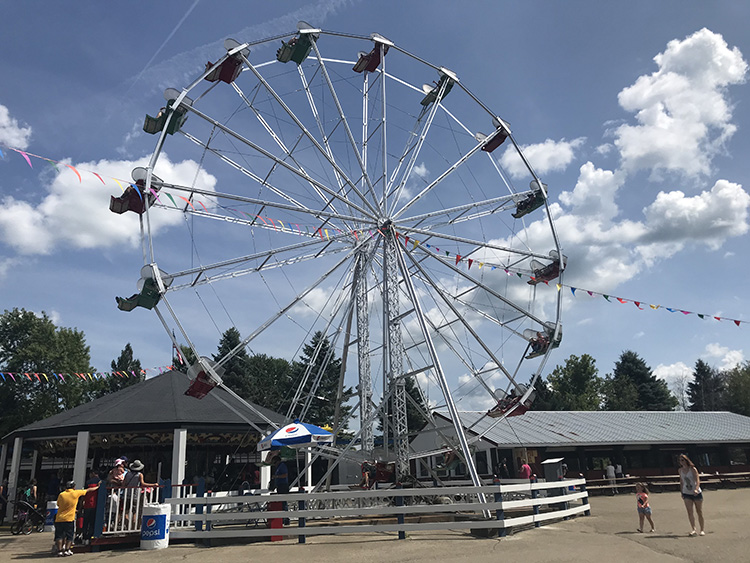 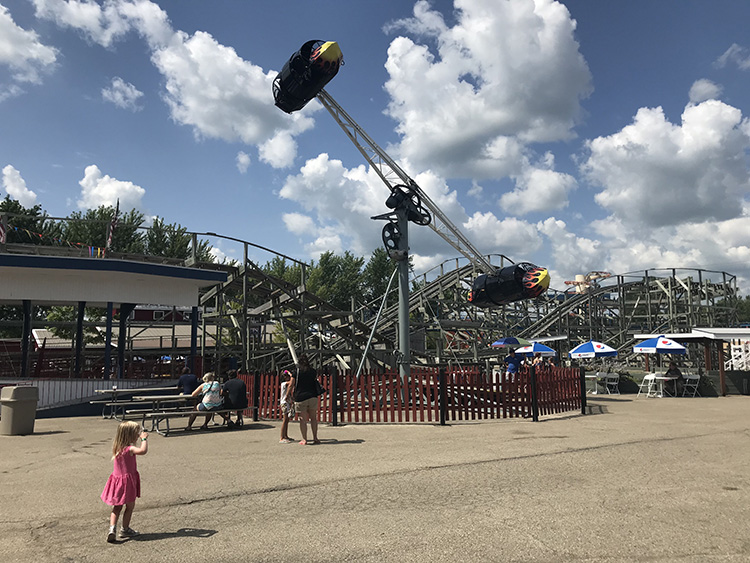 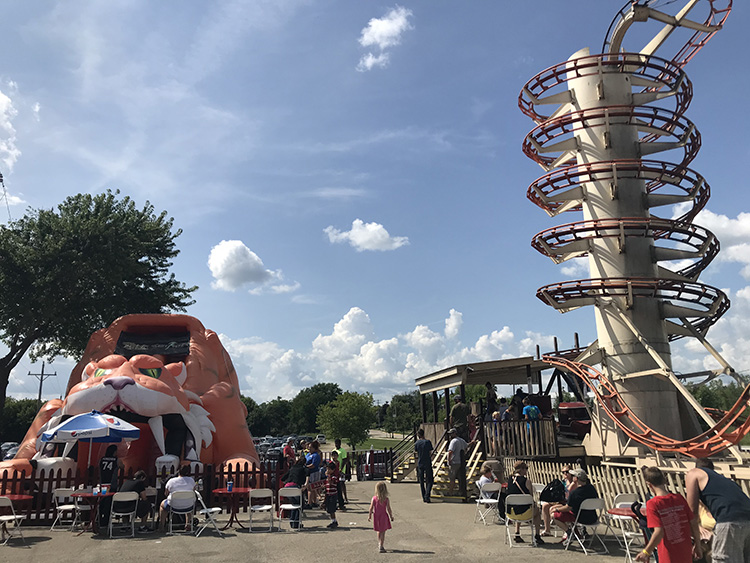 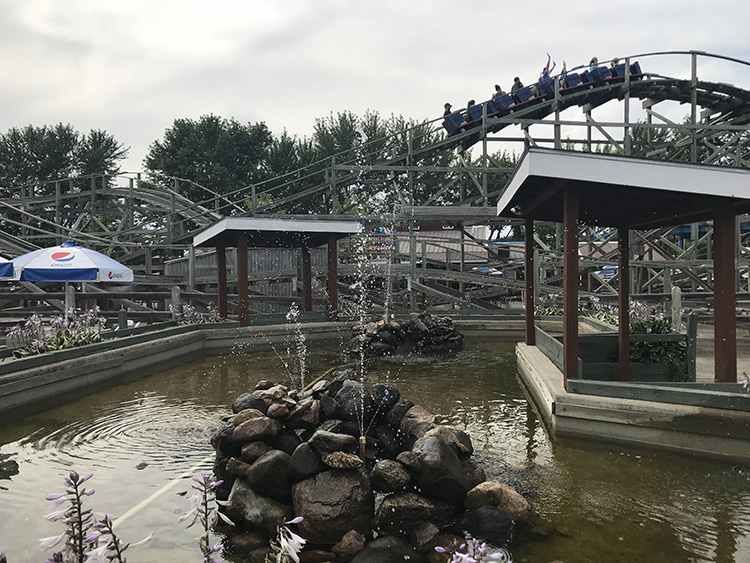 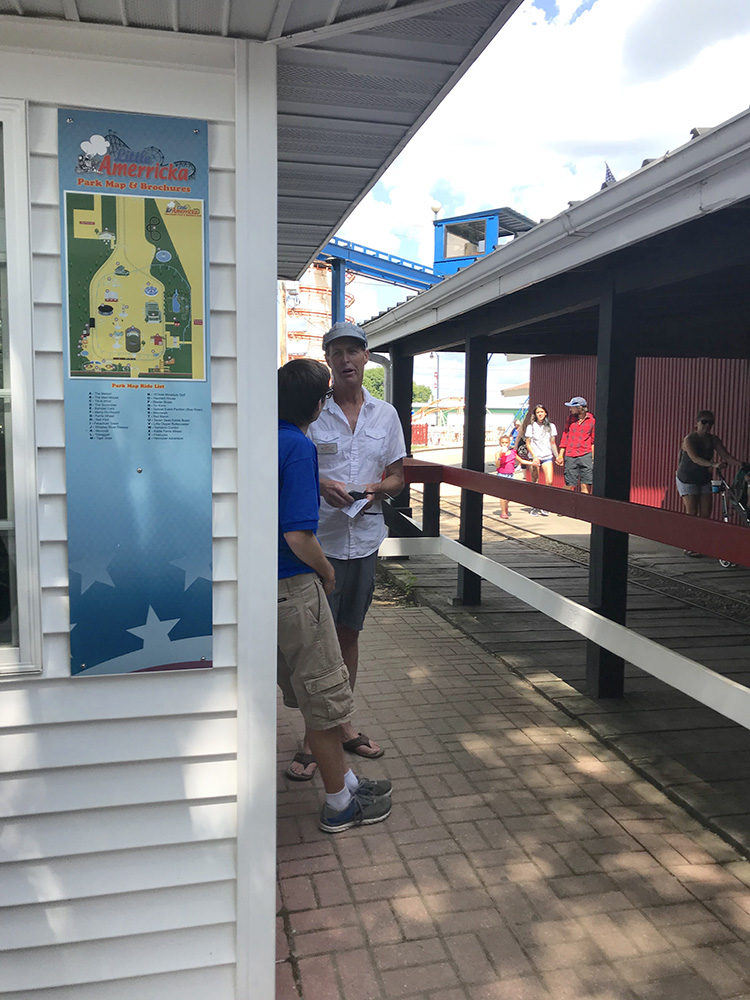 The rides are old, charming, and well-maintained. (And long. Seriously, $1.50 will get you a seemingly endless ride on the Ferris Wheel.) The staff, meanwhile, ranges from friendly high school kids to ancient retirees who aren’t afraid to holler at some punks who WON’T STOP DOING FLIPS IN THE BOUNCE HOUSE I TOLD YOU GUYS TO KNOCK IT OFF ALREADY! Some will fan your kids off when they come around in the sweltering Kiddie Wheel; others will be the subject of this unfortunate occurrence:

Speaking of the above story: In a Yelp-ified world where entitled customers and rude parents (especially rude parents) fire off angry missives any time their asses aren’t properly kissed, Little Amerricka would seem to be a one-star-rating disaster waiting to happen. It has none of the big-budget sheen of say, Great America, and all of the charm of a state fair midway. It’s rough-and-tumble, a little frayed around the edges. Again, it’s right next to a cemetery. (The park currently enjoys a four-star Yelp rating, though there are plenty of petty complaints.)

When we asked Milwaukee director Kurt Raether about his 2014 short film, Little America, he put it this way:

“Of course, America is no utopia, and neither is Little Amerricka. The attractions are mismatched, there are no fences, and the mechanics of the rides are laid bare for everyone to see. It’s really the scrappy attitude and spirit of the people running the place that keeps it together. So the park is a microcosm of a lot of things in my mind.” 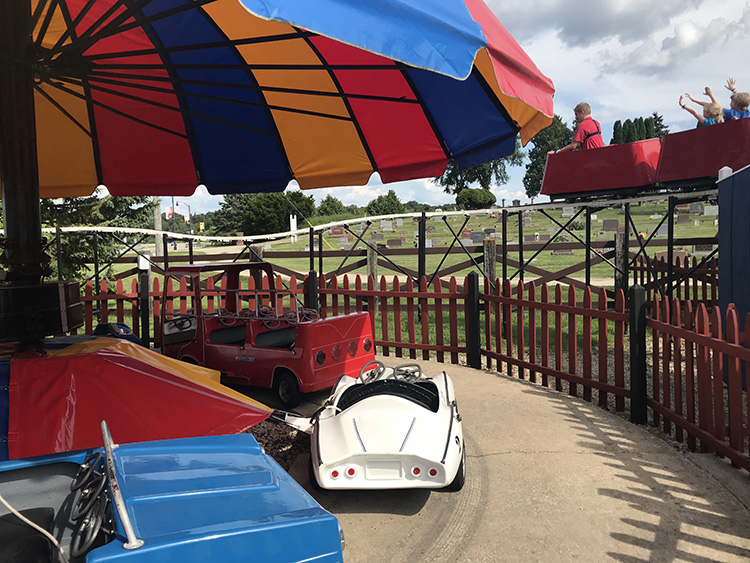 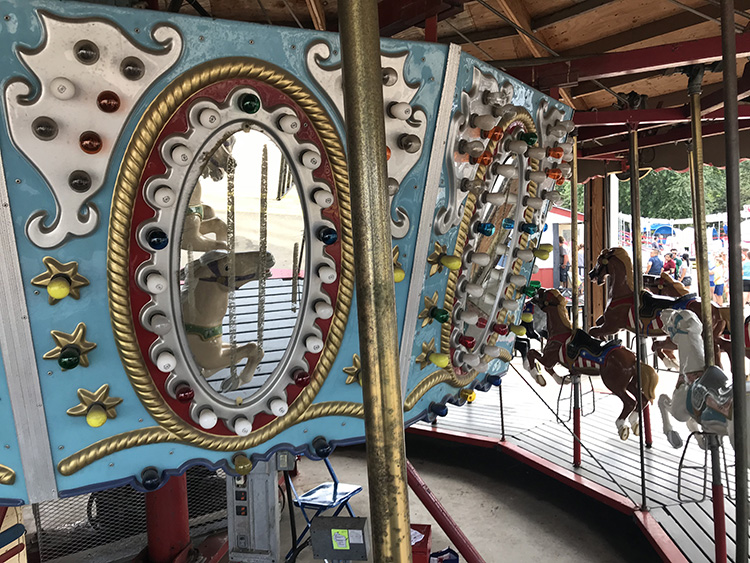 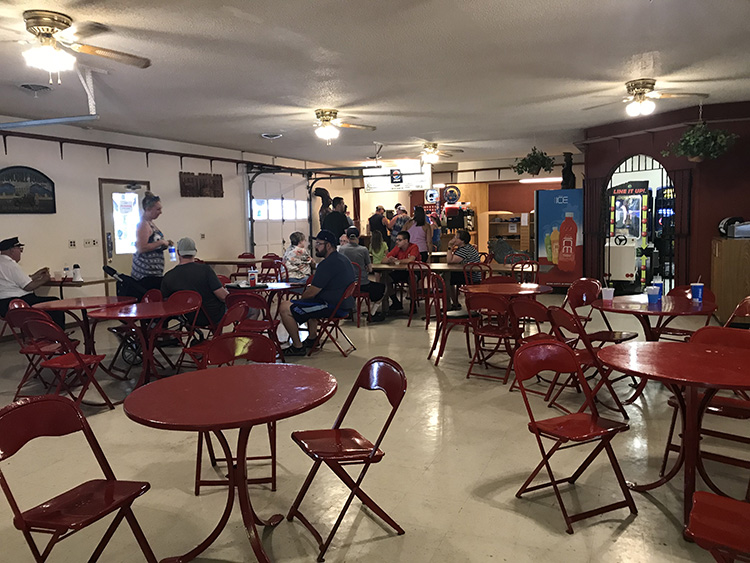 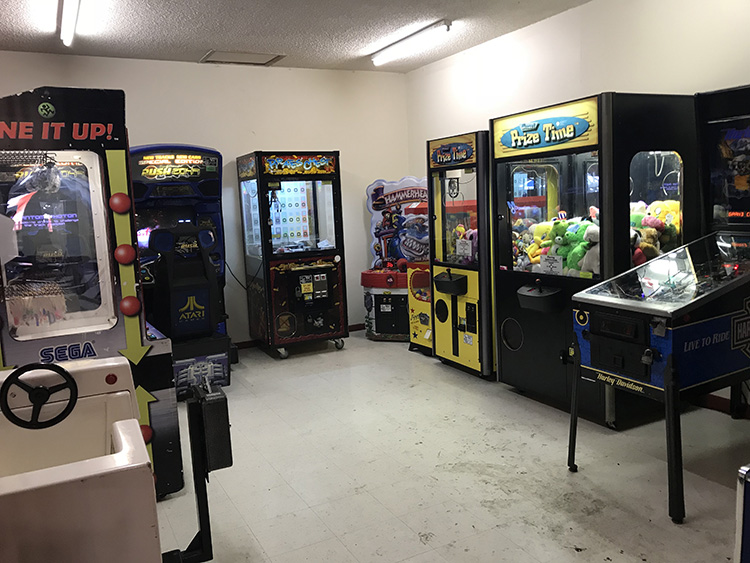 And thank goodness it is a little scrappy. It’s real, it’s simple, it’s fun. A few chips of paint and splinters of wood? Live a little. And how else can you give a kid a terrific time for less than $20 and sit down with the park’s train conductor, Terrance Bullock (“Like Sandra Bullock!”), for an end-of-the-day ice cream? 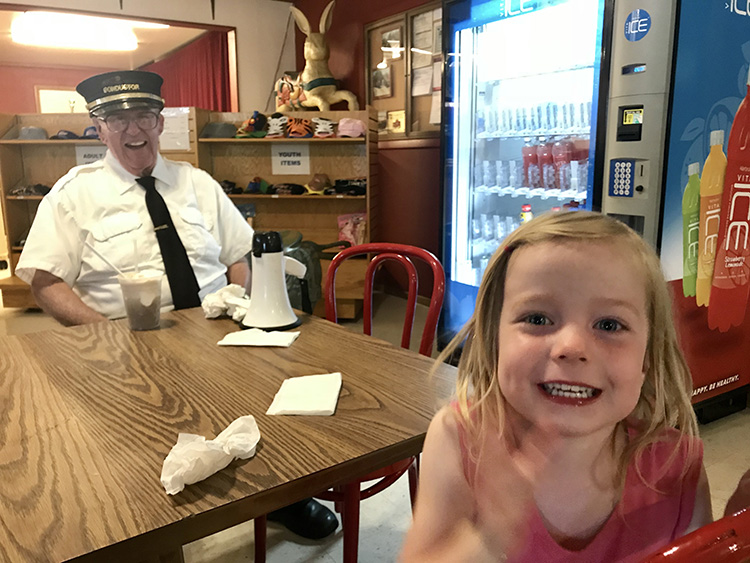 “Neither Lee nor I ever saw the park becoming what it is. It just happened,” Klompmaker once said. “We just threw things together based on our past, what we’d enjoyed as kids, and what we’d want to enjoy with my kids and Lee’s grandkids and great-grandkids. We’d buy a ride and place it in the park.”

“Buy the ticket, take the ride,” someone else once said. With mortality looming just beyond its gates, Little Amerricka is a reminder to buy those tickets and take those rides while you still can.