• On Friday, June 9, at 8 p.m., Riverside Theater will host a free concert dubbed “Cheers to Milwaukee.” The Miller Brewing-sponsored show will feature complimentary Summerfest tickets and, more intriguingly, a mystery band. “We are thrilled to be a part of this event and help Miller Brewing thank the city of Milwaukee for their support over the last 160 years by hosting a really cool, free concert at The Riverside Theater with a band we know everyone will love,” says Gary Witt, CEO of The Pabst Theater Group, in a press release.

So, the question is: Who’s the band that everyone will love? Your guesses, please, in the comments below. We’re betting on Bruce Springsteen and/or Elton John. [Pabst Theater Group]

UPDATE: Word on the street is that it’s none other than Chevy Metal—a.k.a. the hard-rock cover-band alter ego of Dave Grohl and the Foo Fighters. [88Nine Radio Milwaukee] 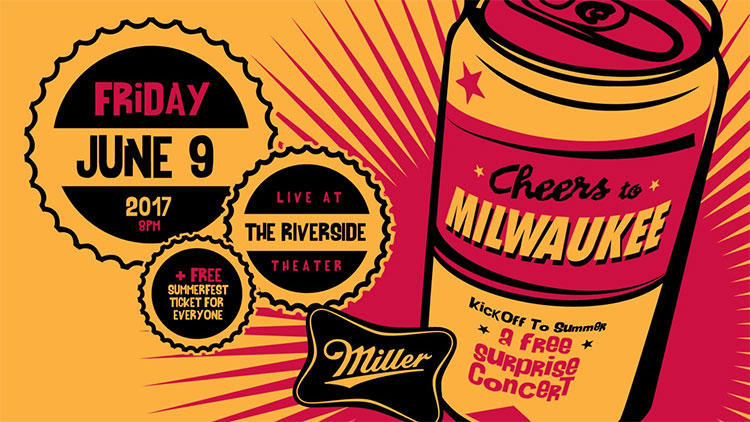 • Speaking of Summerfest, here’s what the new Miller Lite Oasis looks like. [OnMilwaukee]

• Milwaukee has more venues and more shows in its future, but does it have more people to support all those venues and shows? Piet Levy looks for answers. [Milwaukee Journal Sentinel]

• Behold, the latest video and song from the mighty Tigernite! [YouTube]

• ICYMI, you can get Lakefront’s Riverwest Stein in cans now. [Urban Milwaukee]

• A Warby Parker is coming to the Third Ward. [OnMilwaukee]

• Want a fleeting glimpse at a bunch of downtown condos you’ll never be able to afford? Then check out “Downtown Diggs” this Saturday! [Urban Milwaukee]

• “Age is just a number, they say. Seventy is the new 50. That strikes me as a psychological comb-over: we’ve reached authentic old age. If 70 is the new 50, dead must be the new 80.” Milwaukee historian extraordinaire John Gurda is about to turn 70. He wrote a wonderful piece about it. [Milwaukee Journal Sentinel]