Have you heard the news? Milwaukee Record has its own beer. It’s pretty damn good, and we aren’t the only ones who think so. Since its December release, the spiced rye porter we brewed in collaboration with Company Brewing—as an effort to raise funds for Local Coverage 2017 beneficiaries Girls Rock Milwaukee and COA Youth & Family Centers—has amassed an average rating of 4.188 on Untapped (out of 5), while earning reviews like “Awesome” and “A very tasty porter! Light mouth feel, good spices [on the] backhalf.”

For the first two weeks of its existence, Re-Porter was exclusively available at Company Brewing. Now, as we’re within a month of Local Coverage, we’ve expanded the beer’s availability to four more establishments. Here’s where you can find it. Just to be clear, a dollar from every beer purchased goes to the aforementioned organizations and Milwaukee Record keeps none of the proceeds.

Goodkind: The Bay View restaurant is home to delectable food, carefully crafted cocktails, and an impressive beer list. As of Wednesday, Goodkind also offers our beer. The chocolatey, pepper-infused porter makes for a perfect dessert pairing.

Cactus Club: Starting Friday, Re-Porter will also hit the lines at Cactus Club. What better timing than a weekend that features shows from King Dude and Hello Death one night, followed by Whips and Dramatic Lovers the next?

Burnhearts: Rounding out the Bay View portion is Burnhearts. Next Wednesday, the beloved beer bastion will tap its half barrel of Re-Porter. Meanwhile, Milwaukee Record staffers will provide the soundtrack to the bar’s (rarely-promoted) “Creepy Wednesday” proceedings from 3-6 p.m.

Camino: Once another porter or stout at Camino runs out, we’re up. Ownership expects it to be available either later this weekend or early next week. With any luck, it’ll be on hand in time for the bar and grill’s excellent burger night on Monday. Update (12/17): It’s on tap!

Of course, Milwaukee Record Re-Porter is also available at Company Brewing. If you’re interested in having our beer at your place of business and supporting two wonderful local organizations in the process, email [email protected] We have a few more sixth barrels and half barrels we’d be happy to personally deliver to you.

Finks: Our beer has officially hit the East Side. We just left a half barrel with always-awesome Finks. It’s likely to be tapped next week. 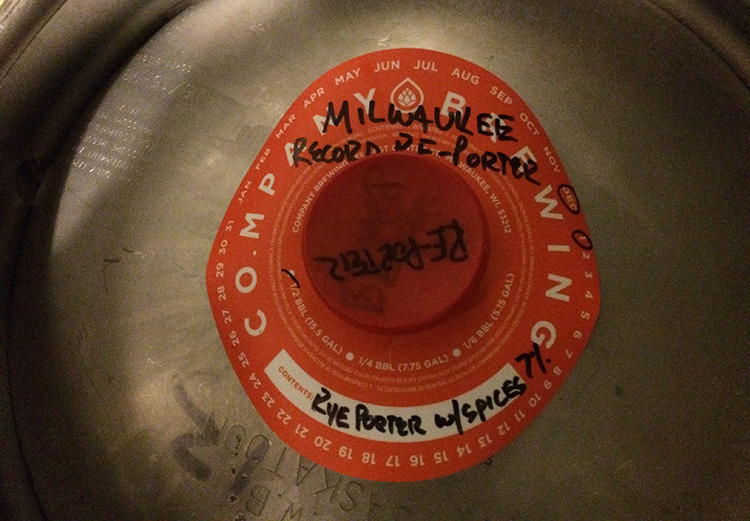