If there’s one holiday season that depends almost entirely on “mood,” it’s Halloween. Christmas and Easter have obvious religious ties, the Fourth of July has obvious national ties, and Thanksgiving has food. Sure, All Hallows’ Eve is technically both a pagan and Christian celebration of the dead, but let’s be honest: the weeks leading up to Halloween are all about breathing in the autumn weather, watching crappy scary movies alone in the dark, and mainlining kilos of uncut pumpkin spice. Trick-or-treating and dressing up as a non-slut-shaming slutty dinosaur or whatever are but the cappers to this wonderful, spooktacular time of year.

Sadly, this time of year is also incredibly fleeting. Drag your heels on busting out that Nightmare On Elm Street DVD box set or cobbling together a Halloween “mood table” and you’ll find yourself smack dab in the middle of 8,000 months of winter. Long story short: If you’re looking to get in the Halloween spirit you better get to it—and what better way to do just that than by visiting the myriad of beat-up, broken-down, and delightfully temporary Halloween superstores dotting the greater Milwaukee area? (And hey, if you walk away with some fake cobwebs and Friday The 13th table settings, all the better.) Today, for the first installment of Halloween Superstores Of The Damned, we visit the Glendale outpost of Discount Halloveen (200 West Silver Spring Drive, 414-332-3295). Let’s go!

Discount Halloveen gets major Halloween-mood points right off the bat with its name: “Halloveen.” You know, like “Halloween,” but how Dracula would say it! Located in the strip mall just east of Bayshore Town Center, the Glendale location is part of a seasonal dynasty (formerly Halloween Extreme) that includes stores in West Allis and Menomonee Falls. Glendale DH opened its doors for the season on September 18, and promises to keep them open until every last man, woman, and child in the area have the opportunity to pick up 128 fluid ounces of fake vampire blood ($29.99) and a dusty Osama bin Laden mask that smells like hard-won freedom and old rubber ($48.99).

Curiously, getting through those doors is a bit of a challenge. In keeping with the ever-so-seedy vibe that gives Halloween superstores their appeal, some banks of doors leading into the inner Discount Halloveen sanctum are locked, while others are “out of order” in ways that doors can sometimes strangely be “out of order.” But if you do happen to find an open door, and you do manage to get past the fact that you’re 37 years old and you’re reviewing a fucking Halloween superstore, you’re in for terrifying treat. 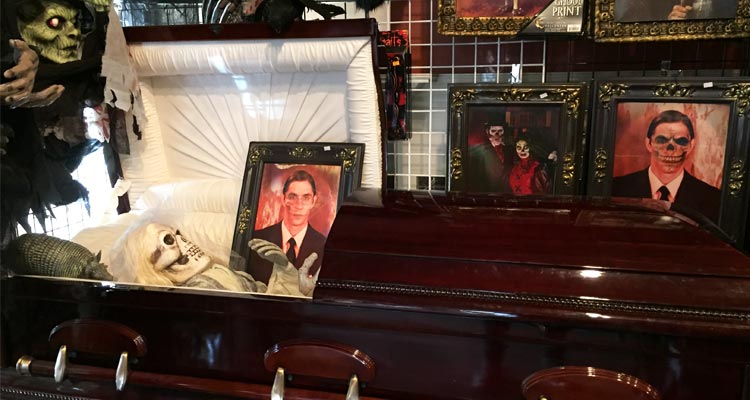 Yes! This is what greets you when you first walk into Discount Halloveen. A full coffin complete with a full skeleton! The mood is immediately set: You’re in for a spooky time filled with spooky deals and you’re probably going to die. Sadly, the coffin isn’t for sale (there’s gotta be a law against that or something, right?), though the stowaway armadillo could probably be picked up for a few bucks.

Once you get past the ghoulish gatekeeper, it’s time to reckon with the cramped, confusing, randomly organized labyrinth that is Discount Halloveen. It’s glorious. It’s like an especially grubby and sweaty Mega Media Xchange, but with less off-brand PS3 controllers and more Freddy Krueger tombstones. Racks of props and decorations give way to an enclave of costumes for boys; a pathway snaking though the women’s department branches off into mysterious pockets of rubber masks and “redneck” beards; a section devoted to fake weapons sits alone in the middle of the store, teeming with official Texas Chain Saw Massacre plastic chainsaws. For some reason, there are a lot of EXIT signs hanging from the ceiling, though no exits are apparent. The message is clear: You’re not leaving until you pick up “giant boob” costume ($48.99), if you’re leaving at all. 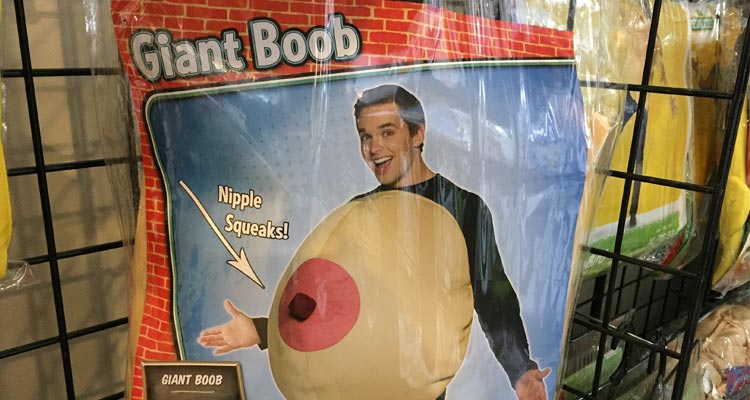 Speaking of costumes: Along with scarfing candy corn and compulsively watching It’s The Great Pumpkin, Charlie Brown, one of Halloween’s great traditions is getting offended by offensive Halloween costumes. Here, Discount Halloveen happily (or sadly, depending on your point of view) disappoints. Despite reports and dutiful Internet anger that Caitlyn Jenner costumes will be all the rage this year, there are none to be found at the Glendale DH. No racist Obama masks, no sexist Hillary masks, no…well, there are Obama and Hillary masks, but they’re not overly racist or sexist. They’re just kind of, well, creepy. Honestly, the most offensive costume on display at Discount Halloveen is fucking Watto from The Phantom Menace: 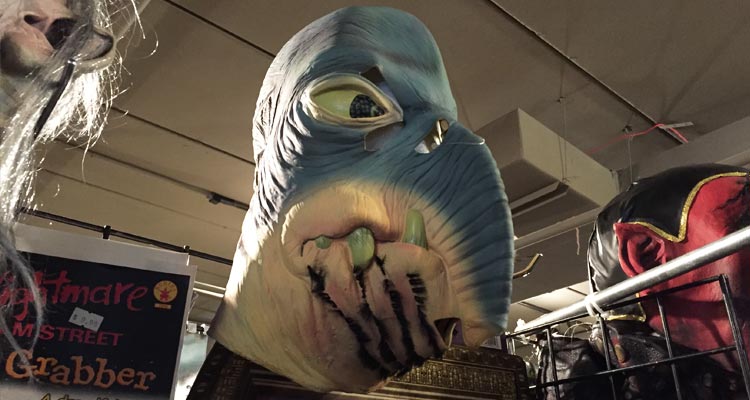 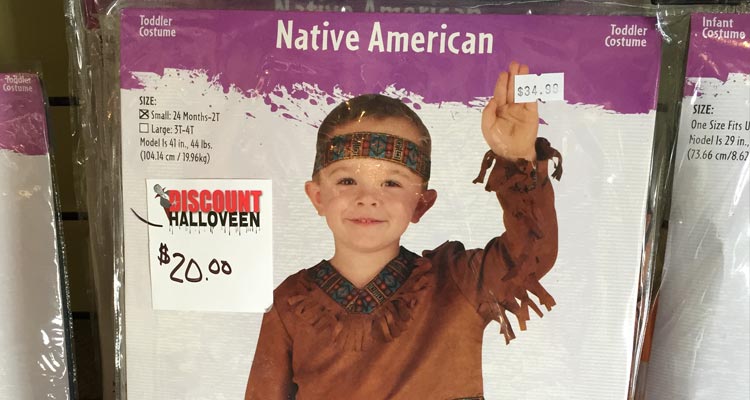 Though there’s plenty of “Halloveen” to be had at Discount Halloveen, there’s precious little discount. Sure, the lil’ Native American costume has been slashed from $34.99 to $20, but other items aren’t so lucky. 30 bucks to dress your kid up like a SWAT sniper? $74.99 for a pair of ghoulish hands reaching out from the ground? $99.99 for an “Oversize Evil Clown”? Who buys this stuff? Judging from the condition of some of the boxes, no one. 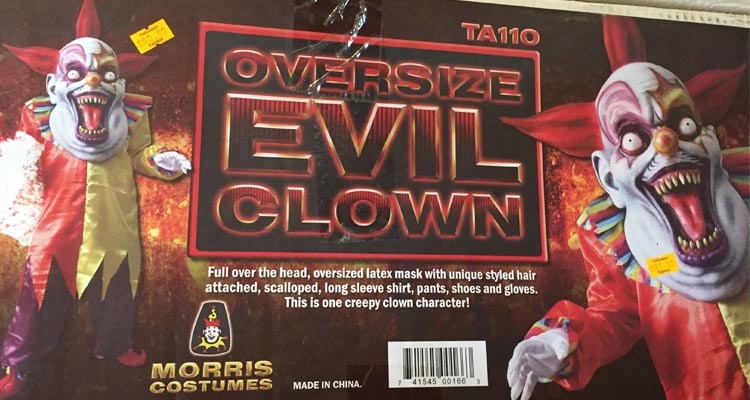 Happily, there are plenty of gross, disgusting, funny, and cheap decorations to be found in the racks. Lots of fake cobwebs, lots of wall decorations, lots of bloody eyeballs. Looking to spruce up your already icky apartment with packages of severed limbs and random organs? Your wish is Discount Halloveen’s command, and it won’t break the bank. 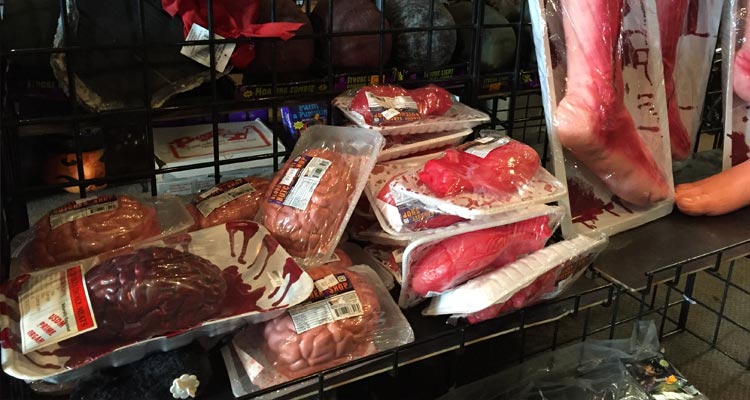 All told, Discount Halloveen is everything a Halloween superstore should be: dingy, odd-smelling, and loaded with enough glorious crap for 10 Halloweens. It’s impossible to enter its doors, skulk through the makeshift aisles, chat up the friendly temporary employees, hear someone yell out “DONALD DUCK ADULT? DO WE HAVE A DONALD DUCK ADULT?” over and over again, buy two light-up ghost lanterns for $6.99 each, and not come away bursting with Halloween pride. If you’re shopping at Bayshore and feel like washing that “fake town square” taste out of your mouth, and replacing it with a bloody gulp of “seasonal store tucked away in the ass-end of a strip mall,” check out Discount Halloveen. Even the carpets are spooktacular. 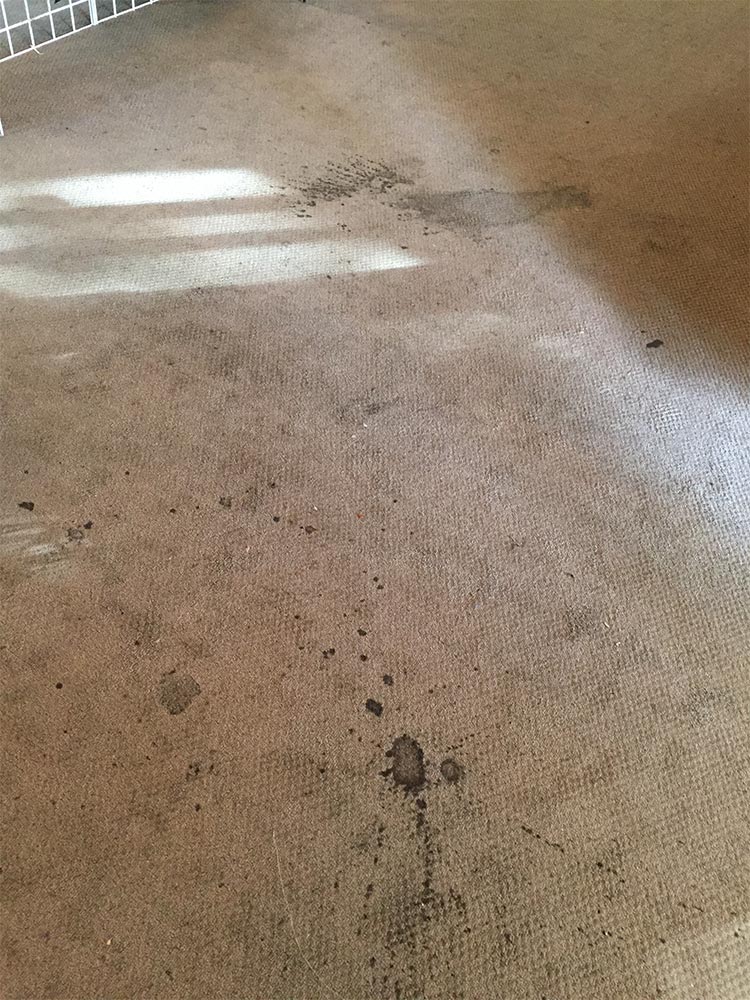