Milwaukee was abuzz with activity last weekend. After years away, Rock The Green made its triumphant return to, uh, rocking the green. Bay View Bash emphatically ended the city’s summer festival season. Both Foreign Goods and Rusty Pelicans played release shows in Riverwest, on top of the numerous worthwhile non-release shows also going on around town. Though the city wasn’t hurting for entertainment options, each concert or block party was competing for second place behind a different type of show that was happening 20-some miles south of the city limits. There, the posh lakeside confines of Racine Civic Centre’s Memorial Hall played host to fierce competition, unmatched cuteness, a loose ’60s theme, and about 200 cats, all of which came together to take the form of the Feline Groovy Cat Show. 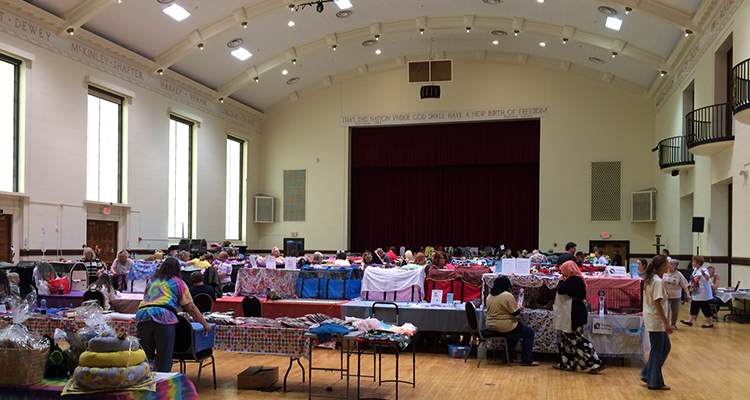 The Feline Groovy Cat Show (September 17-18) is the crown jewel of Cats Rule Cat Club’s competition circuit. The show, which is officially sanctioned by The International Cat Association (TICA), was voted the best cat show in the the association’s Great Lakes Region in each of its first three years. With a near-purrfect track record, would this year’s show live up to Cats Rule Cat Club’s lofty standards? 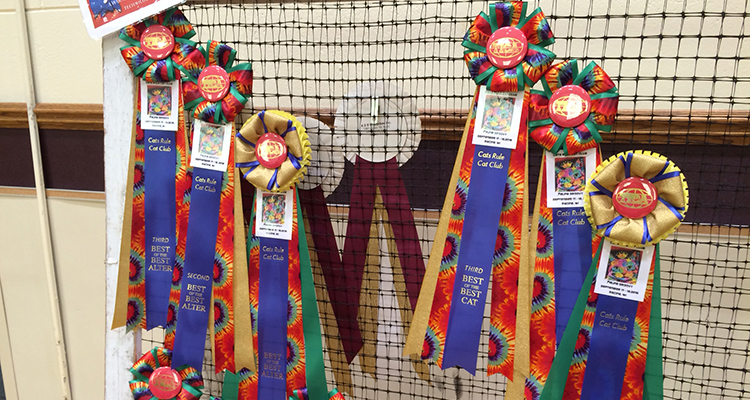 Competitors were separated into different competition classes: pedigree kittens, cats, neutered/spayed cats, household kittens, and household cats. From there, the field split between “allbreeds” and specialty breeds. To keep things fair, only cats of similar coat length could compete against one another. Winners would receive a tie-dyed ribbon, glory, and probably some treats. 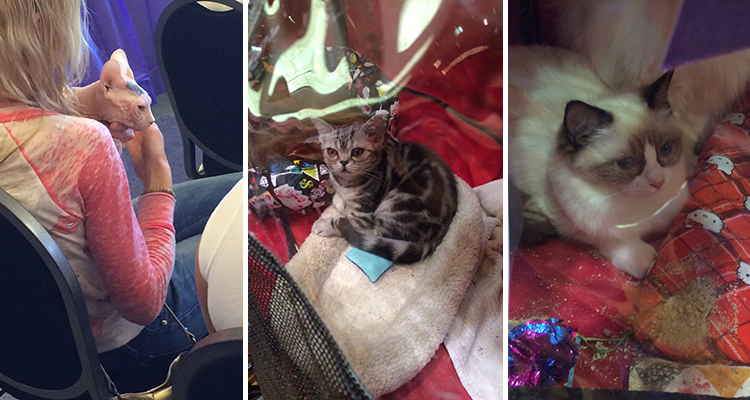 The hall was filled with rows and rows of tables that were covered in cat carriers. Within those cozy mobile containers, a menagerie of furry friends awaited their judgement. There were sphynx cats (top left), gigantic Maine coons, ragdolls (top right), whatever breed this cute dude’s space alien-lookin’ ass is (top middle), among so many others. Some kittens were advertised to sale (some for as much as $1,200), but the majority of the cats seemed calm, comfortable, cherished by owners, and absolutely unaware they were competing in anything at all. But they were competing, and it was serious stuff. 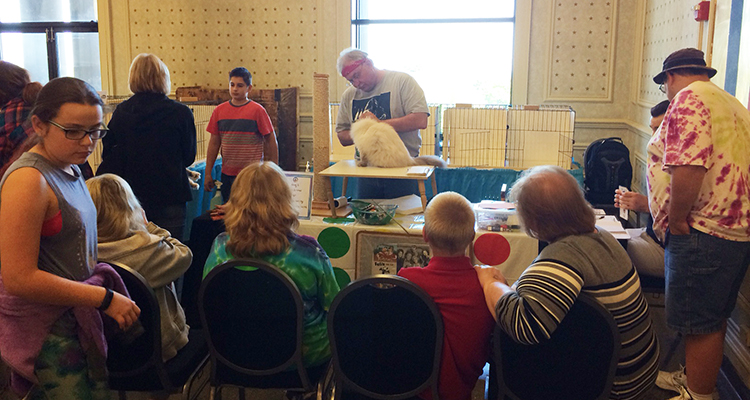 Occasionally, a public address system beckoned cat owners of a particular class to fetch their critters and bring them to one of three evaluation stations to be temporarily crated before their turn in the spotlight. Propped up on a table before a modest group of spectators, the cats were pet, held, coaxed to play with toys, and thoroughly examined. All the while, one of the five TICA-appointed judges—each dressed in era-appropriate attire—explained what he or she was noticing. Attributes like facial musculature, softness or thickness of coat, and color were all taken into account. Even stranger than this process itself were the spectators with no clear vested interest who had shelled out between $3 and $6 to attend the regional cat contest. After each cat was judged, it was retrieved by its human and people applauded. 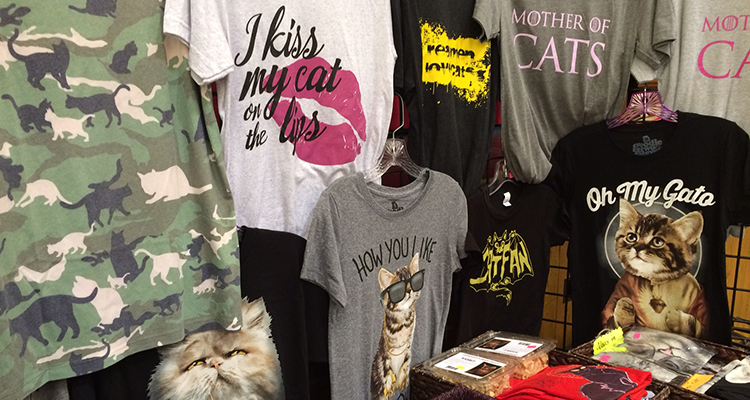 Of course it wasn’t all competitive. There were vendors present who were selling high-tech or homespun cat toys, feline-focused fashions, and delicacies like turkey heart cat treats (aka “Kitty Krack”). One woman was peddling a bunch of used VHS, none of which seemed to have any discernible connection to cats.

Though shopping and looking at a bunch of prim and proper kitties was a nice distraction, competition was clearly king at the Racine Civic Centre. As one evaluation was underway or scores were being carefully tabulated in a sequestered judge’s area, ribbons were being doled out in another station. Owners—oftentimes proudly clutching their prized cat—and spectators alike listened intently as judges named the top three finishers of the CATegory. As competitor numbers were called, some owners showed subtle signs of reserved disappointment. Others people smiled modestly, as if they were keenly aware their pet had won a ribbon…at a cat show in Racine. At least one woman was caught completely off guard by her animal’s victory and hugged her new ribbon recipient while celebrating with another person in attendance. 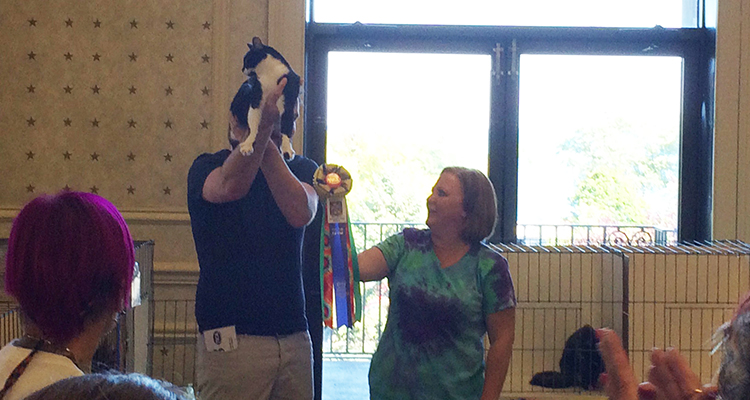 Behind the winners and out beyond the glass balcony doors, there was a whole world of activity. Sailboats were skittering atop the pristine blue water of Lake Michigan. Birds were perched on the lush leaves of hundred-year-old trees. Teenagers were attempting skateboard tricks off a city-funded railing. It’s safe to assume every creature out there was unaware of the strange and extremely specific world contained within the walls of Memorial Hall. It was a world whose residents were united by a shared interest, mutual respect, affinity for 1960s fashion, and an unwavering love for a noble creature. Here, at the fourth annual Feline Groovy show, cats ruled supreme. As weird as it was, this world was kind of nice to visit.