For those keeping score at home, this past weekend featured the Riverwest 24, MishMash Fest, German Fest, Milwaukee Brewfest, and probably 14 other FestFests. With all that ridiculous summer action, it would be easy to forget about the annual Brady Street Festival. But forget we did not! Milwaukee Record MVPs Maggie Iken and Cal Roach braved the East Side shindig to bring you the following minute-by-minute recap.

1:45 p.m. – There’s some tattooed guy with a ponytail on the Bud Light Island Main Stage doing Zumba with a handful of unenthused followers in the crowd. We feel too uncomfortable to take a picture of the awkward display of physical fitness in action. But much like a car crash, we can’t look away. [Maggie Iken]

1:57 p.m. – We catch the tail end of Yahara‘s set on the Humboldt Center Stage (sponsored by the one and only David Gruber). Having seen this band evolve over the past couple years, we’re thrilled with this incarnation. Reminiscent of Bright Eyes circa Fevers And Mirrors with a slight touch of Bob Dylan, frontman Justin Otto’s wavering and emotional voice compliments guitarist James Sauer’s sometimes dissonant solos. The band plays newer and heavier songs, including set closer “Old Man.” [MI]

2:20 p.m. – Realizing we have minimal phone battery and the task of taking pictures with said device, we duck into Malone’s to hook up our charger. It’s a nice albeit loud escape from the mass amounts of people who have already flocked to Brady St. They’re playing soccer on the TVs, which we zone out on despite having zero knowledge of the sport. We sip one (or a few) whiskey/diets out of plastic cups ($6) while recharging our phone and our extroverted sensibilities. [MI]

3:11 p.m. – Proving that Milwaukee doesn’t have the market cornered on alliterative band names that begin with the word “faux,” Madison’s Faux Fawn entertains a healthy smattering of fans on the Center Stage. The quartet’s crisp mixture of folk and rock brings to mind Andrew Bird or Punch Brothers, only without the overt bluegrassiness. [Cal Roach] 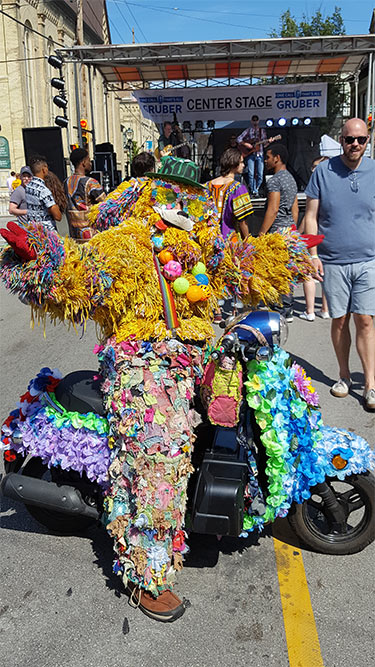 3:24 p.m. – Bud, the moped-riding hippie dog person, cruises through, pausing for photo ops when necessary. We swear we didn’t actually touch him, but we now smell like patchouli somehow. [CR]

4:03 p.m. – As D’Amato finishes sound-checking at the Bud Light Island Main Stage sponsored by Knight Barry Title, some horrible nu-metal song plays over the P.A., followed by an ad for Arizona State University. We understand that this isn’t supposed to be “part of the show,” but what self-respecting sound guy can’t even be bothered to put together a playlist? [CR]

4:20 p.m. – The 10-piece ensemble D’Amato has put together for this show includes the always amazing SistaStrings as well as vocalist Ms. Lotus Fankh. There’s a genuine soul revue energy going on; D’Amato stops the music for a couple of spoken-word interludes as well as a spotlight moment for drummer Will Rose (a.k.a. Airo Kwil) to take the mic. The band never misses a cue. [CR]

4:27 p.m. – “We just wanna shout out to Bud Light—that shit is gross, why y’all drinkin’ it?” says D’Amato, nobody’s corporate whore. Meanwhile, a cup of beer that may or not be an Anheuser-Busch InBev product is balanced precariously atop the head of a dancing old man. [CR]

4:31 p.m. – Lotus Fankh takes center stage for her own “Gon’ Wit Yo Creep Ass.” The free-for-all that is the current Riverwest R&B/soul/hip-hop scene continues to see new talent rise up even as stars of the scene defect to different cities. [CR]

4:38 p.m. – Foreign Goods explode off the stage with a song that sounds like a samba as interpreted by John Zorn. The group seems to add new stylistic elements with each performance, bending the jazz/afrobeat/funk core in every conceivable direction. [CR]

4:52 p.m. – Guitarist Randy Komberac draws the current jam into metal territory, leaving us to wonder if country or even polka could some day be incorporated into the Foreign Goods repertoire. Not that we’re rooting for such developments. [CR] 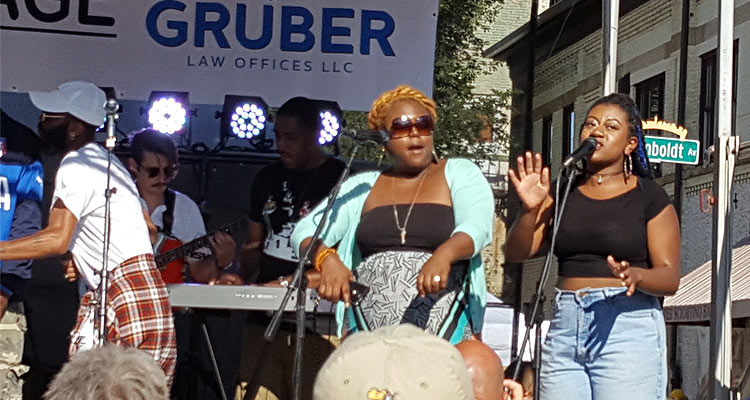 5:04 p.m. – The Pukes are a bit raucous in comparison to most of the other acts of the day, and that’s only the first way they draw attention to themselves. Frontman Jules Frank is wearing a pink bow akin to Hello Kitty, and at some point takes off his pants to reveal a tight pair of booty shorts. The three-piece outfit unapologetically rip through their set, playing songs off their self-titled EP. [MI]

5:41 p.m. – Sounds Of Time introduce a new song called “Wake Up.” It’s got a good hook and message, but the duo might be well advised to front-load their set with a proven hit or two if they want to draw a crowd. [CR]

5:45 p.m. – Okay, “Graveyard,” this is a good choice, but where are all the 88Nine kids? It’s perplexing that perhaps the Brady Street act with the most FM airplay isn’t pulling in fans. Is it possible that the proliferation of live bands in the local rap scene is starting to edge out the DJ/MC paradigm? [CR]

6:32 p.m. – New Boyz Club push genre boundaries with their amalgam of gypsy jazz, indie rock, and soul pop. They perform their standard fare (including the danceable “I Know Why The Caged Bird Sings”) and a cover of “Summertime.” Bassist and bandleader Johanna Rose and keyboardist Katie Lyne share verses, while Rose and her brother/drummer Will switch the beat from the tune’s laid-back jazz tempo to more of a hip-hop/bebop style. [MI]

New Boyz Club “I Know Why the Caged Bird Sings”

6:45 p.m. – An unfortunate common occurrence has plagued yet another street festival: subpar and unprepared sound guys. More often than not, performances throughout the day, including the one from New Boyz Club, have had microphones completely cut out. While the bands handle the situation with grace and patience, this is what sound checks are for. [MI]

6:54 p.m. – Man about town Chris Gilbert is making all the ladies in the vicinity of the Bud Stage swoon with his dance moves, and there’s nobody even performing onstage. We’re hoping some Five Finger Death Punch pops up on the sound guy’s phone to present Gilbert with a real challenge. [CR]

7:28 p.m. – Since every song that Canopies have played so far has been one we know and love, we’re suspicious that the band hasn’t written a song in two years or so. They sound as tight as ever, and their performance is one of the more energetic ones we’ve caught today; maybe they’re just keeping us all in suspense until a new record is forthcoming…? [CR]

8 p.m. – Joseph Huber and company keep the tempo up despite being without a conventional drummer. Huber has a makeshift cajon by way of a bass drum pedal connected to a suitcase, which he perches upon. It’s poppy country but it’s not pop country, and this fine line opens up a entire genre for those who are vehemently opposed to radio twang. The band looks to be enjoying themselves more than any other set we’ve witnessed today. [MI]

8:23 p.m. – An apparent metal sculpture of an elf warrior comes to life and terrifies several small children. We weren’t startled at all, however. Nope. [CR]

8:41 p.m. – All indications are that Mama Digdown’s Brass Band features no women. We sacrificed approximately one hour of suffocating crowd navigation to bring you this report. (Note: Actual crowd navigation timings could not be verified.) [CR]

9:15 p.m. – An apparent hoedown/mosh-pit hybrid has ensued in front of Center Stage as Hayward Williams performs. We surmise sadly that we haven’t come close to achieving the level of drunkenness necessary to perform this dance style. [CR]

9:41 p.m. – Devil Met Contention‘s scheduled start time was 9:30, but the crowd is patient. If this is an effort to eliminate sound issues, we’ll gladly stand around listening to the alt-rock Spotify playlist being pumped through the speakers in the meantime. [MI]

9:54 p.m. – The set has finally begun. Devil Met Contention play the part of a festival headliner well. Their cohesive outfits (you’ve seen the suit coats and nice pants) inject a level of thought and professionalism into their stage presence. Their set list is written on a whiteboard (go green). Starting off with “Snakeskin Blues,” the quartet shows that they are able to maintain an edge while consistently making music that can appeal to a variety of listeners. [MI]

9:58 p.m. – As “testicular difficulties” persist at the Bud Light stage, we’re faced with the reality of a Brady Street Fest crowd swarming in anticipation of a drag show. Somehow, we figure that fighting our way close enough to enjoy the show is probably not going to result in any actual enjoyment of the show. It’s been fun, but it’s time to call it a night. [CR] 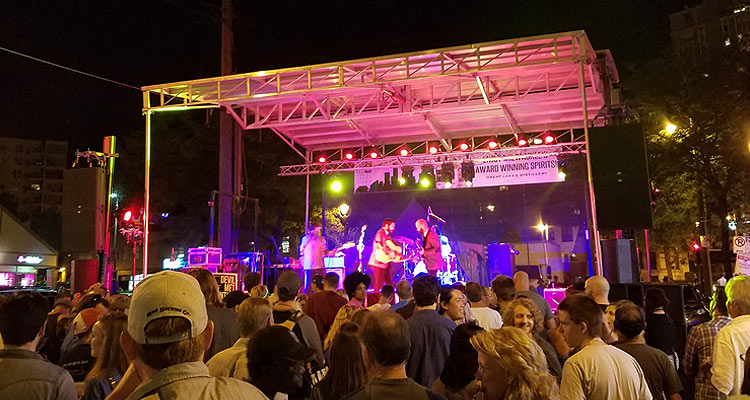