Adventure. You’ve seen it in movies and energy drink advertisements, but have you ever really experienced it? It’s not for everyone. It’s for Bear Grylls, Zoe Saldana characters, and that Free Solo guy. It’s also for our buddy, Keith Nienow.

If you get your hair cut at Stag Barbershop, you may know Keith Nienow as the well-groomed jack of all trades keeping everything at the shop in order. However, this past January and February, he was half of a two-man team that sailed a wounded 36-foot yacht from the Canary Islands to Martinique. That’s about 3,000 miles and 3,000 stories worth of open North Atlantic Ocean. We recently sat down with him to get the whole story of his intercontinental adventure. If you plan to keep reading, this is a good time to take some Dramamine. 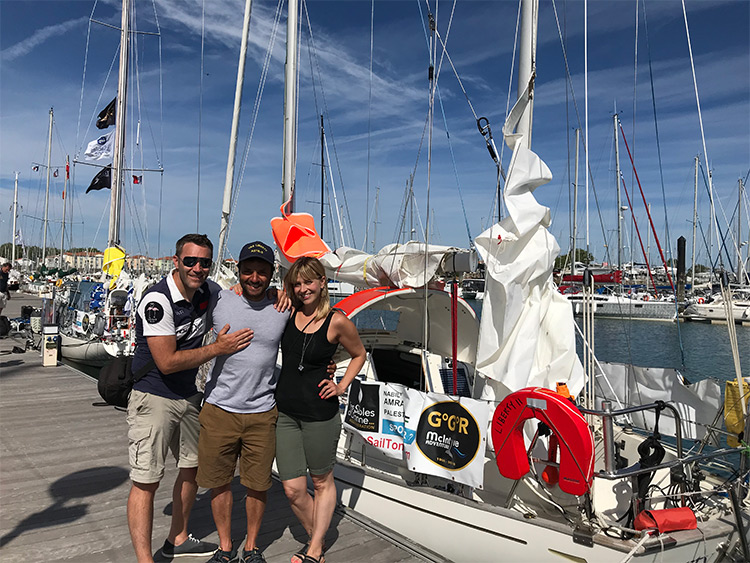 This successful adventure tale actually begins with an unsuccessful adventure. Nabil Amra, a.k.a. Nienow’s former landlord and roommate in Minneapolis and the owner of the 36-foot yacht, was part of the field in the 2018 Golden Globe Race. Nienow and Jess Stern (owner of Stag Barbershop) went to Les Sables-d’Olonne, France to see Amra off on July 1, 2018. About three weeks later, Amra’s voyage was over.

In mid-July, a weld broke on the windvane (a self-steering mechanism) of Amra’s boat. The loss of this equipment meant that all steering would need to be done by hand. Knowing the circumstances would make it impossible to finish the race, Amra backtracked without sleep for three days, about 100 miles to the nearest port in the Canary Islands. He left his yacht with a fellow named Vladimir in Las Galletas (a small port town on the south end of Tenerife, the largest Canary Island) and returned home for three months of recovery, sleep, and more sleep.

In early November, Nienow received a call from Amra reminding him of a conversation they’d had in France months earlier. Nienow had promised that he would join Amra in sailing his boat back to the States should anything go wrong during the Golden Globe. They decided to meet up on Las Galletas on January 7 to take the boat off of Vladimir’s hands, fix it up, and head towards Florida.

Getting the boat ready for the long trip took 10 days. During that time, they waited for a part to ship from France that would replace what went wrong on the self-steering mechanism. It never arrived. Instead, they visited a local Volvo service shop and had replacement parts fabricated. The parts weren’t exactly finished, but they were probably okay and it was time to leave, so they shipped out with what they had. What could go wrong? Also, they took a boozy water tour of the island with a new buddy named Tonguy. 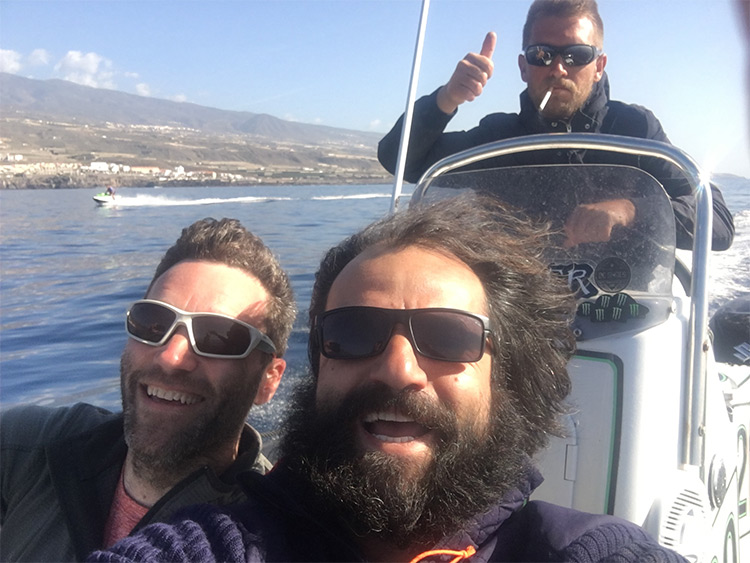 JANUARY 17
Nienow and Amra shove off. Conditions are generally ideal due to a wind shadow on the waters surrounding each of the Canaries. Outside the shadow of an island, things get real. The “Canary Goodbye” makes things very interesting for the next 12 hours, with winds of about 25 knots (~29 mph), crosswinds, and eight- to 10-foot swells. As they approach another Canary Island, things calm down again, followed by more tumultuous conditions. By the end of the second day, Nienow has finally adjusted to life on a boat and all the dolphins swimming past certainly help. The calm-tumultuous-calm process repeats for about three days total, until they are completely out of the Canary Islands.

JANUARY 21 (EVENING)
There is a full moon, very up-and-down weather, and 15-foot swells. According to Nienow, it’s beautiful but impossible to photograph. Just had to be there. (Editor’s note: No thanks.)

JANUARY 22
The two-man crew starts receiving messages from home on their satellite phone about an approaching storm. The phone has GPS that allows them to see where they are, but also allows those with access back home to see where they are—a handy and sometimes scary feature. Nienow’s text to Jess Stern in Milwaukee says, “Calm, millions of stars, sparks in the water. BEAUTIFUL!!!” The sparks were bioluminescent algae in the water. Beautiful indeed, but there’s no ignoring the fact that the storm is coming and it’s big. 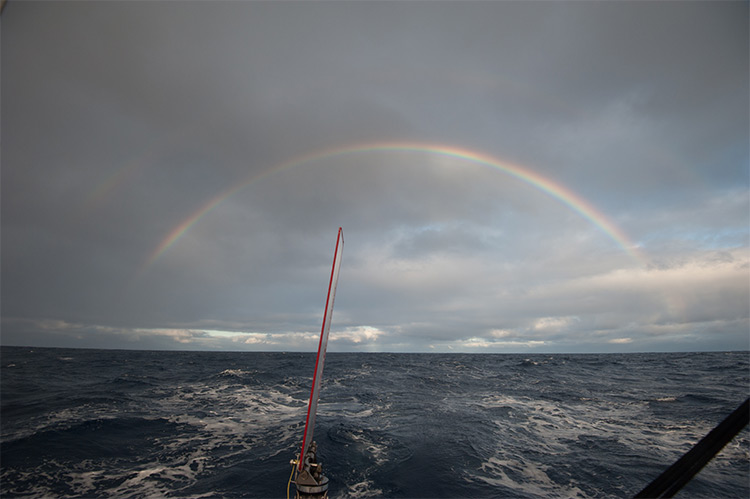 JANUARY 23, 24
They sail straight south to try and avoid the storm. It’s not far enough.

JANUARY 25 (1:18 p.m. CST)
Nienow texts Stern: “It’s go time. Talk to you on the other side.” The storm is officially here. Stern sends “a million” text messages that never go through. Stern assumes the worst until she receives a text message at about 4:30 a.m. saying, “Baby dolphins.” They’re just fine. 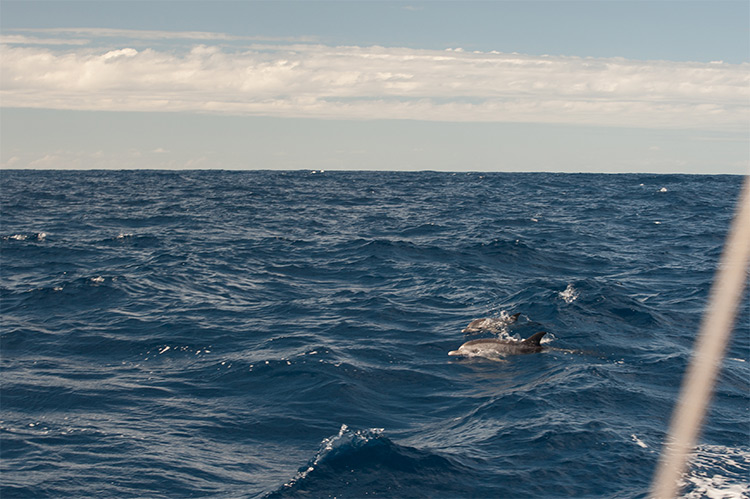 During the storm, the guys opt to “heave to,” which means they set up the sails and rudder to keep the boat stationary while the crew waits out the storm below deck. During the storm, the waves smack the side of the boat so hard that everything on one side of the cabin occasionally flies across and lands on the other side. At one point, Amra and all of his stuff in and around his bed gets kicked clear across, landing on Nienow in his bed. But, they survive the storm.

JANUARY 26
The weather is beautiful. Smooth sailing all day. Nienow texts home: “Hope it stays this way for a while.” 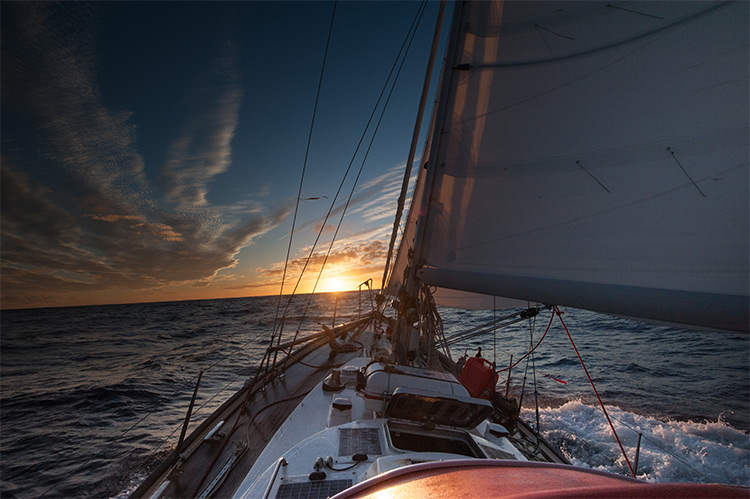 JANUARY 27
Stern texts Nienow from Milwaukee that the Polar Vortex is happening. Like a total jerk, Nienow replies, “Gross. I’m in my underpants.” Nienow and Amra catch two tuna and one dorado and have delicious tuna steaks for dinner while all of Milwaukee freezes. Jerks. Some lightning pops up on the horizon at night, but Stern looks at the weather maps and doesn’t see anything significant on her end. Probably fine. The replacement part for the windvane self-steering mechanism also breaks. Probably fine. Right? 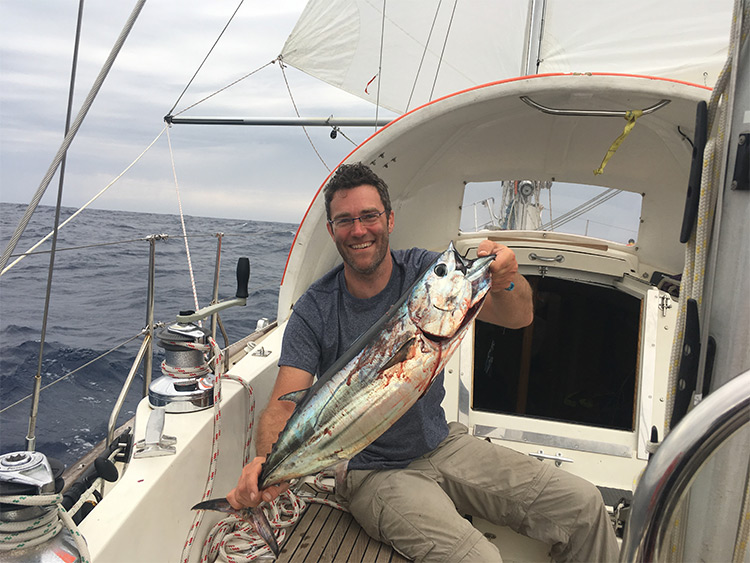 JANUARY 28
Ten additional inches of snow fall in Milwaukee. Lightning from the night before remains, along with some wind. Nienow and Amra replace the windvane part with one of the extras they had fabricated on Las Galletas, only to find that there’s now a crack in another part of the windvane. Not fine. The crew updates their travel plans, deciding to aim for Martinique now instead of Florida. Amra asks his girlfriend to contact the manufacturer of the windvane and have a better replacement sent to Martinique. Anticipating that the storm in front of them is moving north, the guys keep the boat going southwest. The storm stops moving and the boat goes right into it for about six hours. 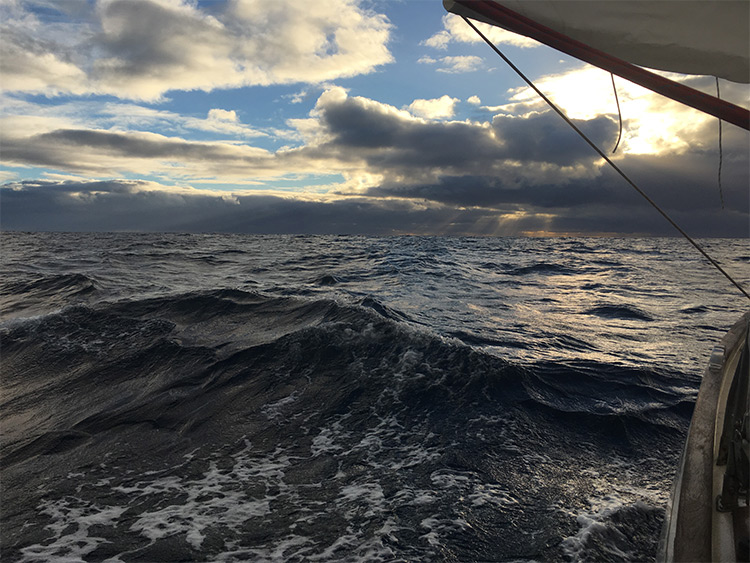 JANUARY 29
Flying fish are a new development and they are everywhere. Nienow reels in a 25-pound tuna. Just after he begins cooking the first fillet from the freshly caught monster, the storm suddenly reappears. They get to eat about a quarter of the fish before bracing for impact. The storm lasts for 12 hours and it once again interrupts texting service to and from the satellite phone. 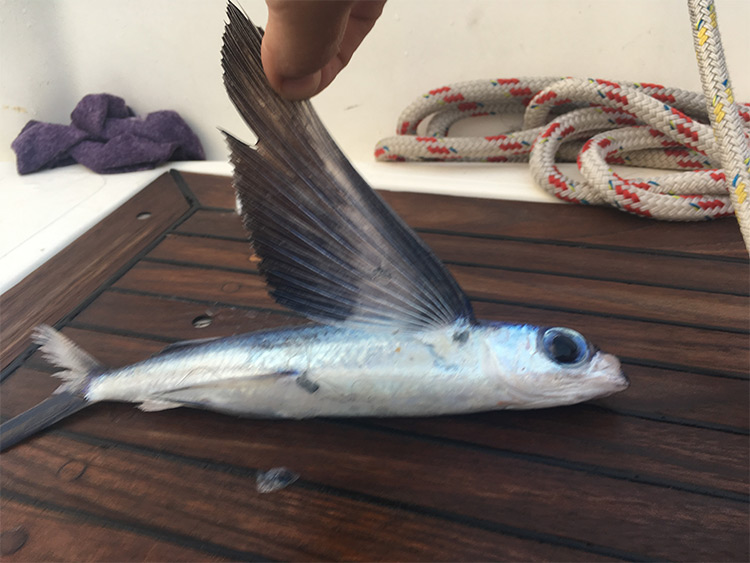 JANUARY 30
The weather has calmed some and cautious optimism is on the rise. The guys aren’t cold, but they have been in rain suits for two straight days. 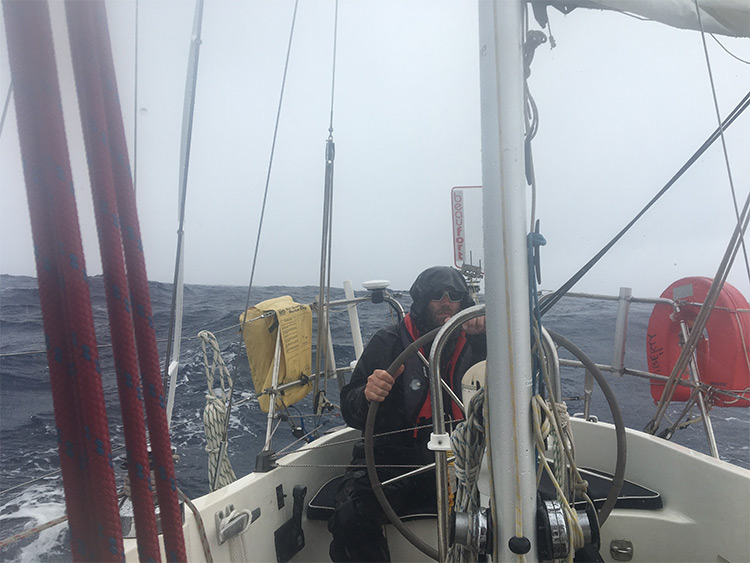 JANUARY 31 – FEBRUARY 1
Tradewinds and calm, cloudy weather in the vicinity make for some smooth sailing, but there are more visible thunderstorms in basically every direction. The windvane is really starting to fail and Nienow and Amra are only able to use it at night now, and only at reduced sail.

FEBRUARY 2-8
Smooth sailing on the water. With dry land just days away, communications with girlfriends on land increase. Stern plans to join the guys in Martinique and sail with them for a few days to St. Martin. The guys warn Stern about the complicated process involved with using the bathroom (called the “head” at sea) on a sailboat. It involves cabinets, valves, hatches, magic spells, and more. 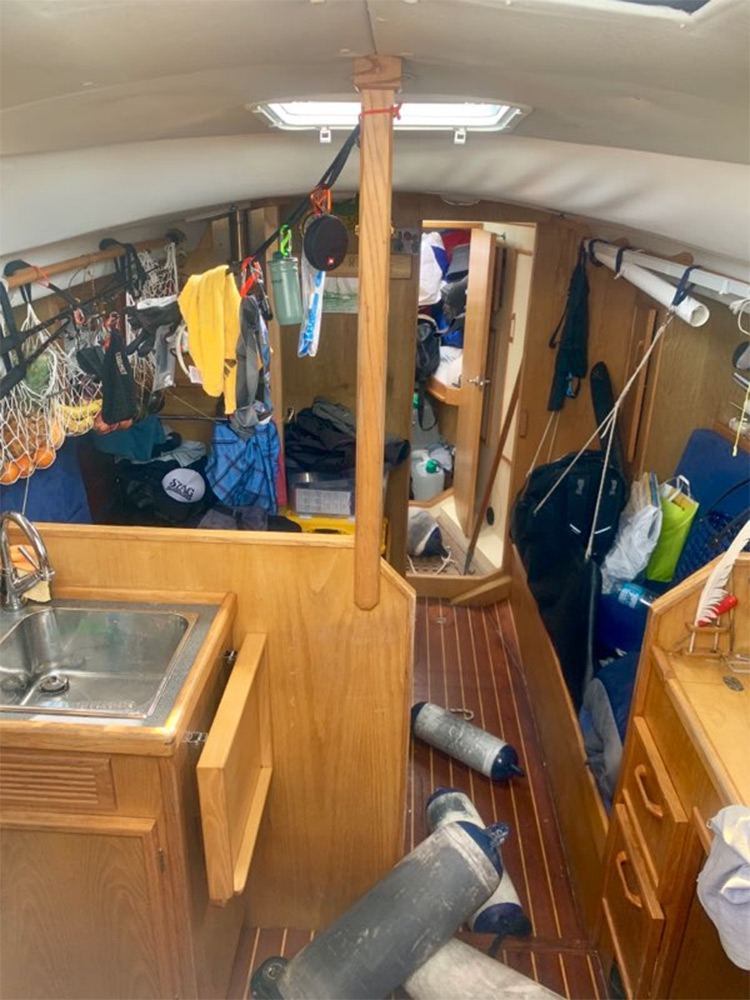 FEBRUARY 9
A whale about twice the size of the boat swims up alongside for a little while, nearly colliding with the boat at one point. The guys aren’t able to tell what breed of whale it is, but it does “use the head” in their direction at one point, if you follow.

FEBRUARY 10-14
Twenty- to 25-knot winds push the boat right into Martinique! Nienow and Amra arrive in the bay off La Marin around 4 a.m. on Valentine’s Day and anchor about 3/4 of a mile from shore, among hundreds of other boats. It’s dark and they’ve been steering for 20 hours straight as the windvane completely failed the previous evening. They have no reserved place to dock and they also don’t have a dinghy, so there’s no way for them to sail to the shore. People are having a great time on the shore, but Nienow and Amra are stuck.

Fortunately, the Taberle Sailing School in Martinique is the sister school to the sailing school in Les Sables-d’Olonne, where Amra began the Golden Globe. The school in France made it clear that if Amra ever ended up in Martinique and needed a favor, the local school would be happy to help. Convenient! Amra reaches out to the school and about 12 hours later members come out on a small boat with a replacement part. They even offer to pilot Amra’s boat into the marina!

The helpful gentlemen get the boat within about 50 yards of shore, but still about a half-mile from the docks. While Nienow and Amra are closer to land, they will have to spend one more night on the boat. They’re not thrilled. 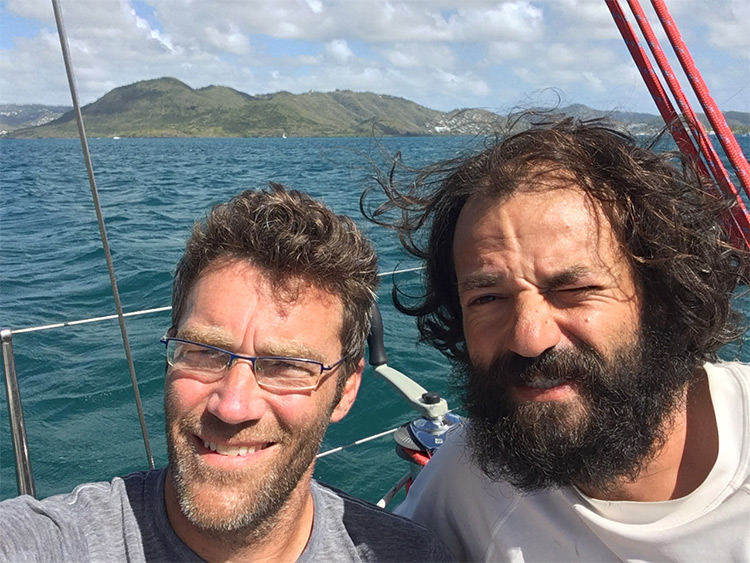 FEBRUARY 15
Another student comes out to deliver a dinghy for Nienow and Amra to use. It has no motor. They both sit cross-legged on the tiny boat and row as fast as they can all the way to the docks. Everyone in surrounding boats laughs at them for the duration of their ridiculous situation. After 30 minutes and a half-mile of rowing, they’re finally on land for the first time since January 17. Wasting no time, they quickly find a bar and get a beer. Stern meets them later that week. She eventually learns to use the head and the crew of three gets to enjoy three days of fun, storm-free sailing to St. Martin. 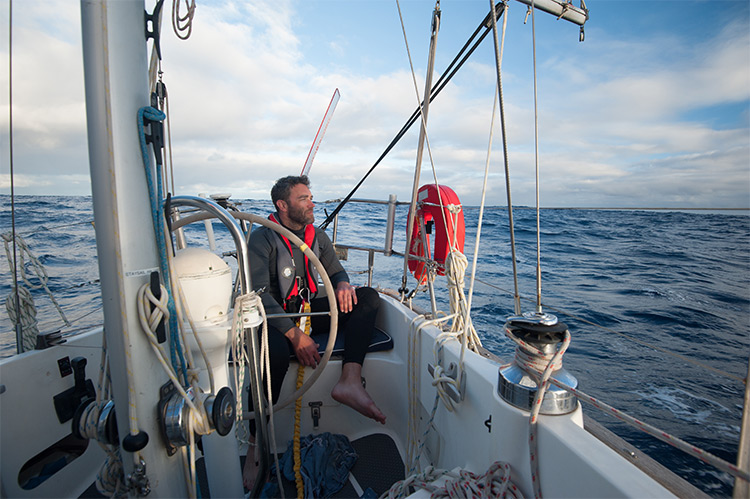