This past Sunday, I went to the Lynden Sculpture Garden to see a retrospective performance from the Trisha Brown Dance Company, which kicked off Alverno Presents’ 2014-15 season. To say I knew nothing—and still know nothing—about postmodern dance would be an understatement. Brown’s name rang a distant bell in my head (she’s kind of a big deal), but the importance and intricacies of her renowned body of work were mysteries to me. Still, there I was, watching a group of internationally acclaimed dancers sway, twist, and bend amidst the bold, towering Lynden sculptures—monuments whose deeper meanings also eluded me. Needless to say, I loved it.

Like many people, I often experience a crippling fear when approaching an unfamiliar type of art. There’s a worry that I won’t “get” it. How could I possibly appreciate something as niche and daunting as postmodern dance (and/or fine art, classical music, poetry, etc.) without being previously steeped in it? What business would I have blindly dropping in on this art without first knowing its history and complexities? Better to ignore it and stick to the stuff I already know, like guitar rock, B-movies, and “Weird Al” polka medleys.

But by the time Brown’s company got around to a piece entitled “Sticks”—which found the dancers balancing the ends of long, thin wooden sticks on their heads, kneeling down, and then shifting the sticks to their shoulders using only their feet—I realized there was nothing to “get.” Or rather, I didn’t need to “get” anything. Simply watching a group of people in motion—smooth, calculated, simple motion—was the only takeaway I needed. After all, what is dance but movement? What else did I need to know? Like I said, I loved it.

I mention this because the subject of venturing outside one’s comfort zones comes up a lot in the world of arts and entertainment. In response to our piece on Milwaukee bands that are bigger elsewhere, some conversation sprouted up online about how local audiences are sometimes hesitant to explore music that falls outside their tried and true tastes. How is it, fellow Milwaukee music writer Sahan Jayasuriya wondered on Facebook, that a local hardcore band like Expire can play to huge crowds in Europe and crack the Billboard 200 with its latest album, but find little or no love (or coverage) in its native city? (Confession: I knew little about Expire before yesterday. I’m currently atoning for my sins.) How is it that Milwaukee sludge-metal technicians Northless can receive oodles of hometown press and praise (the band’s 2013 album World Keeps Sinking landed at #14 on our list of the best Milwaukee albums of the past four years), but still find the majority of their success outside the state? Is the Milwaukee metal scene simply too small, or is something else going on?

The worlds of postmodern dance and hardcore metal couldn’t be more different (though I’d love to see them overlap), but I suspect the same things are keeping them in their respective closed orbits: a fear of the unknown, and a fear of not “getting it.” Who has time to learn about classical, modern, and postmodern dance? Who has time to figure out what makes one metal band average and another great? No one, that’s who. But here’s the thing: there’s something to be said for just sitting back and enjoying things at face value. In the case of the Trisha Brown performance, it was watching people move, and watching people use their bodies in unfamiliar (and sometimes reassuringly familiar) ways. In the case of bands like Expire and Northless, it’s simply experiencing the noise, the volume, and the precision of the group in front of you. Simple as that.

Letting yourself go inside an unfamiliar type of art or music would seem to rule out any critical thought, but I’ve found the opposite to be true. During the show at Lynden, I was surprised by the connections and critiques I was making, and by how easily those thoughts came. A wonderful piece entitled “Accumulation” found a solo dancer starting with simple hand movements and slowly building a full-body dance—adding a move, going back to the beginning, adding another move, etc. Set inside a giant minimalist sculpture made up of brightly colored beams, it reminded me of those old Simon memory games. Later, a series of pieces called “Leaning Duets” called to mind theater “trust exercises.” A few seemed too haphazard, but a few more seemed elegant and refined. Did I need to know that the pieces originated in 1970, and that they toyed with the ideas of gravity, form, and mass? No.

Another question: Can you derive deeper enjoyment from a piece of art by bringing some experience to the table? Of course. Still, personally speaking, some of my best show-going experiences have been courtesy of genres or bands I knew little about going in. (Northless and metal, for example.) And, despite better versing myself in those genres and bands later, that first, uncomplicated experience has always stayed with me the longest.

Oddly, in the case of Sunday’s Trisha Brown Dance Company performance, it was a piece that didn’t happen that most affected me. Immediately following a playful “Spanish Dance” set to Bob Dylan’s recording of “Early Morning Rain,” it started to, well, rain. Audience and dancers alike quickly ran for a nearby tent. The storm was brief, but it was enough to cancel a final performance set atop floating platforms in the Lynden pond. The abrupt conclusion was understandable, but incredibly disappointing: It had been so easy to get lost in the moment, so simple. And like any first experience, so impossible to repeat. 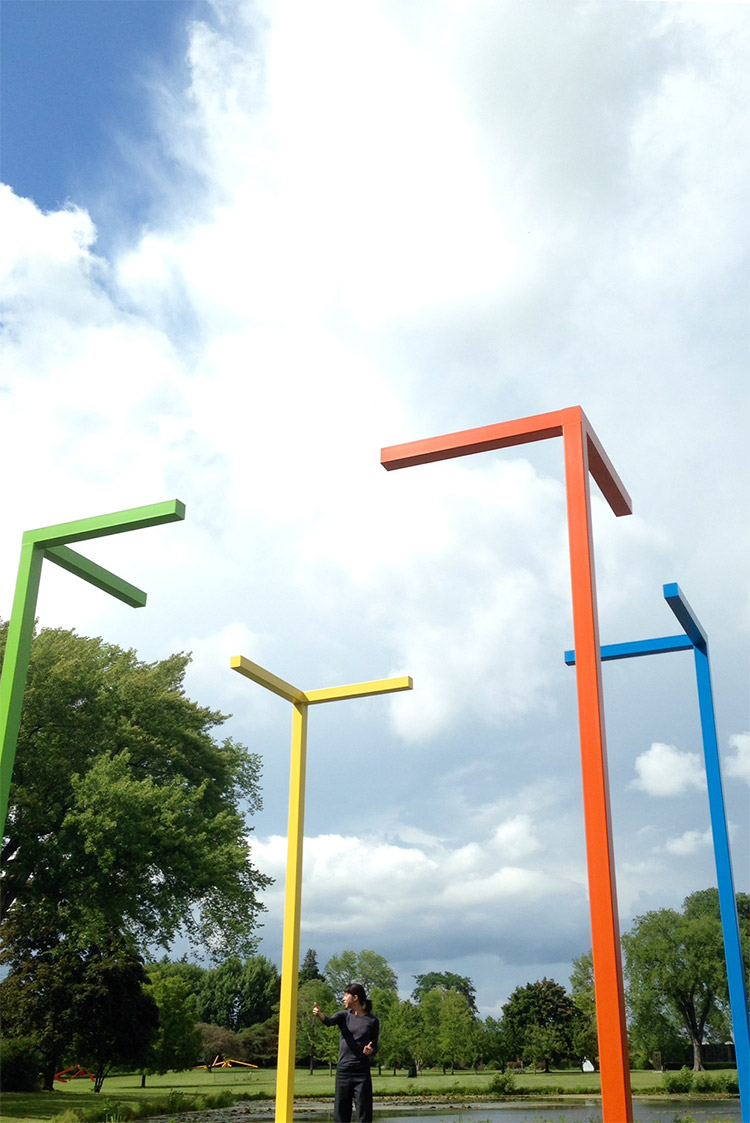