Of all the unusual acts that have come through Milwaukee, never has their been one stranger than noted astrophysicist and ambassador of science (or perhaps, more correctly, SCIENCE!) Dr. Neil deGrasse Tyson. Dr. Tyson, who is playing a sold-out two-night stand at the Riverside Theater with a different focus each night, used the word “lecture” to describe Wednesday’s inaugural talk, but he didn’t get to be America’s Favorite Really Smart Uncle without being able to entertain.

Dr. Tyson came out to a standing ovation and immediately expressed wonder that so many people had come to the show. He opened with a discussion about his recent Cosmos reboot and how it reached such a wide audience, even though it was connected to Fox—a media giant not exactly known for its love of science fiction or thoughtful scientific discussion. Science in the media was one of the main topics of discussion, with Dr. Tyson highlighting films that featured scientists as characters beyond just being the Exposition Guy, and discussing how the explosion of Comic-Con bodes well for future generations using science fiction as a gateway to exploring science fact.

Last night’s lecture also featured a quick tour of a few science-minded viral videos, with Dr. Tyson unpacking them a bit further with his analytical eye. He was just as excited about the Orion launch as many people were a few days ago, but sad that a test launch generated such excitement—because those started happening 50 years ago. He talked about the famous Russian meteorite caught by several dashboard cameras, and chilled the audience with a seven-page list of other asteroids that consistently cross Earth’s path. This led to an extended and amusing riff on how the planet and the universe themselves are hostile to life.

Thursday’s event will be about what science is and how it works; like Wednesday’s lecture, the evening will end with a Q&A session. Last night’s Q&A played something like an encore, with Dr. Tyson revisiting elements of Cosmos, suggesting that parents let kids explore their curiosity to encourage a love of science, discussing his status as a meme, and even showing the source of that meme—both in its original form and a slowed down version. The Q’s ranged from fans of his celebrity to science nerds talking heavy theory, but Dr. Tyson did a great job with the A’s for the folks who stuck around.

Toward the end of the evening, one of the audience members noticed that Dr. Tyson wasn’t wearing his shoes. Dr. Tyson pointed out that the Riverside was a performance space and that he removed his shoes as a tribute to the artists that played on the stage. In its own way, the lecture was a performance, with the doctor using his body to illustrate astrophysical concepts like a dancer, breaking up dry scientific ideas with hilarious asides like a comedian, and connecting with an audience like an accomplished frontman of knowledge. Dr. Tyson ended with a reading of Carl Sagan’s “Pale Blue Dot” speech from the original Cosmos. To the audience at the Riverside, it was the greatest cover ever heard. 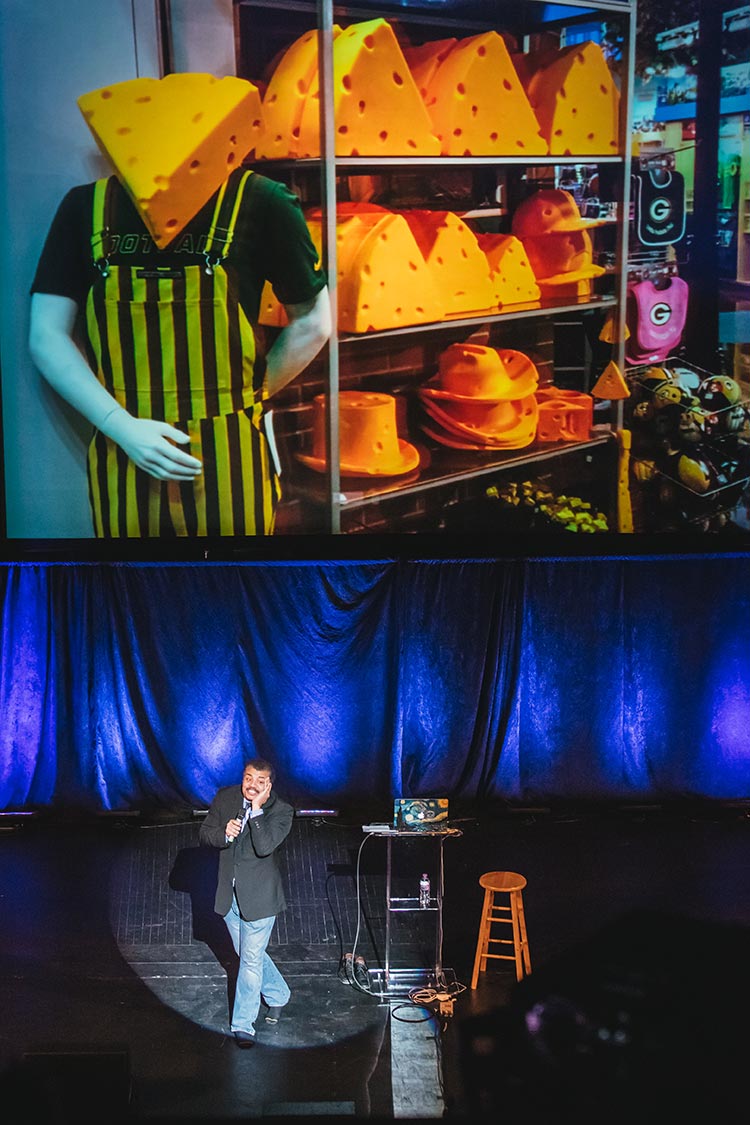