If you’re looking to spice up your holiday season with a little something off the beaten Hallmark Christmas movie path, look no further: On Thursday, December 5, the third annual Milwaukee Krampusnacht will return to the Bavarian Bierhaus for a night of costumes, music, food and drink, arts and crafts, and general tributes to the half-goat/half-demon Krampus, a figure from Alpine folklore who punishes naughty children and acts as a foil to the do-gooding Saint Nicholas. Wait, what?

Yes, past installments of Krampusnacht have been big hits, packing the Bavarian Bierhaus (and originally Lakefront Brewery) and generating a ton of yuletide buzz. This year’s shindig looks to be a doozy, too: There’s a parade sponsored by American Science & Surplus. There’s a sing-along to “The Nights Of Krampus,” courtesy of Chicago’s The Courtesan And The Cabin Boy. (The name of their album? Krampus: Get In My Sack!) There’s the return of “Kid’s Krampus Hour,” which is incredible.

Tickets are on sale now, and are $5 for general admission and $10 for Kid’s Krampus Hour. Here’s a full press release and schedule:

Milwaukee Krampusnacht Returns as the Creepiest, Coolest (and we would argue Best) Holiday Celebration December 5 at the Bavarian Bierhaus

Krampus is an Alpine tradition—children in Germany, Austria, Croatia, northern Italy, and other countries are told that on Dec. 5 they will be visited by Saint Nick, who will reward good children, but bad kiddies will be terrorized by the monstrous Krampus. Other cultures have a similar theme—there’s the Welsh horse skeleton named Mari Lwyd and yuletide witches that ride in the night, for example (both also represented at our event).

Here’s some of our favorite talking points about Milwaukee Krampusnacht:

– It’s a no stress holiday event where you can party with Krampus, have a good time, and shop for all the lovable weirdos in your family.
– It’s an event that keeps cultural traditions like Krampus and other characters alive.
– It’s also a charity event—we have donation boxes set up for Toys for Tots and encourage attendees to bring new, unwrapped toys. We also have a gift basket raffle with money raised also going to Toys for Tots.

4pm: Bavarian Bierhaus is open and so is the Krampus Holiday Market (Konig Gambrinus Room)

7pm: The Courtesan and The Cabin Boy (Beer Hall, they are kicking off their set with a sing-along of “The Nights of Krampus”) 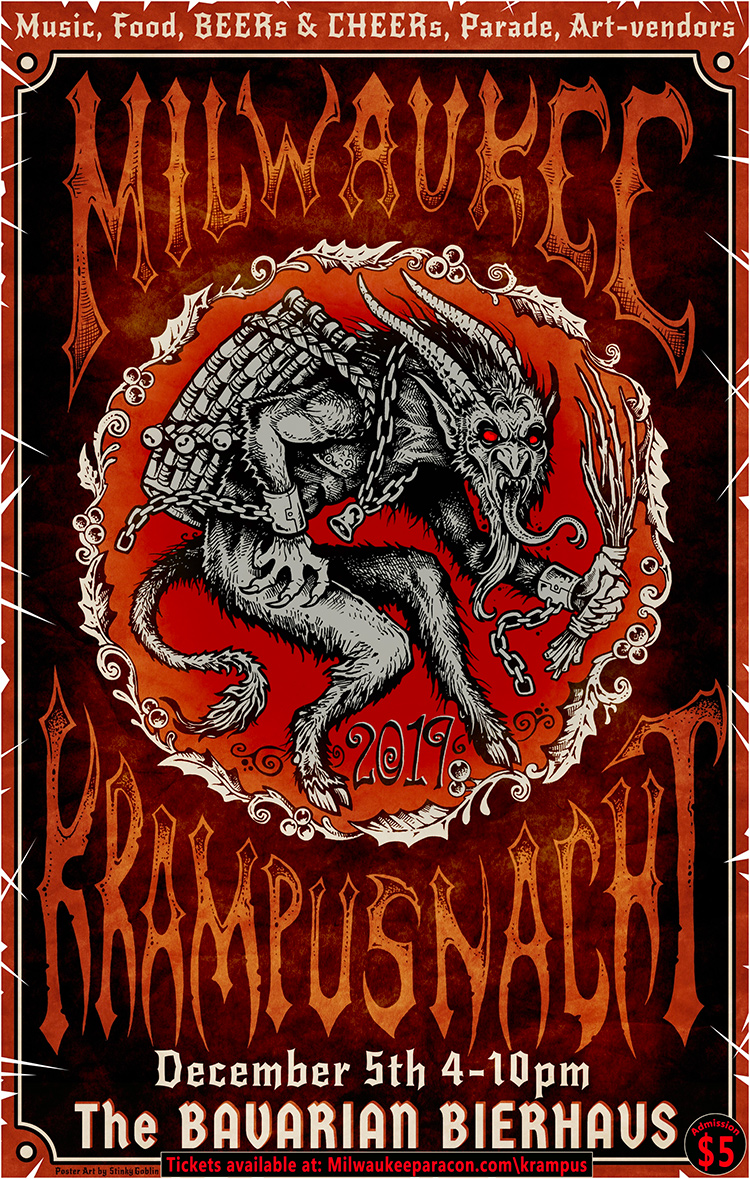