The winter edition of Milwaukee’s ever-popular Gallery Night kicks off tonight. And while there are approximately 8,000 options for your Gallery Night itinerary, we’d be remiss if we didn’t give a shout-out to the Green Gallery (1500 N. Farwell Ave.) Not only is the longtime East Side gallery opening a show of psychedelic tapestries from Milwaukee-area artist Sheila Held, it’s debuting a canned version of its very own Green Gallery IPA beer.

“Nineteen years ago when I started The Green Gallery in my Riverwest apartment I brewed a Green Gallery IPA and bottled it for the openings to serve as another option along with the returnable bottles of Blatz for gallery visitors,” says Green Gallery owner John Riepenhoff. “When Company Brewing opened around 2015 we started brewing the Beer Endowment together, and this weekend for the first time ever a very longstanding dream of mine is coming true: we’re debuting Green Gallery IPA in cans.”

As for Held’s show, it’s called “Attempts at a Unified Theory,” and it features 25 years’ worth of tapestries that “negotiate themes of the humanities, magic, science, religion, and nature.” The show runs through March 5. The artist will be in attendance for the opening reception, January 20, from 5-7 p.m. 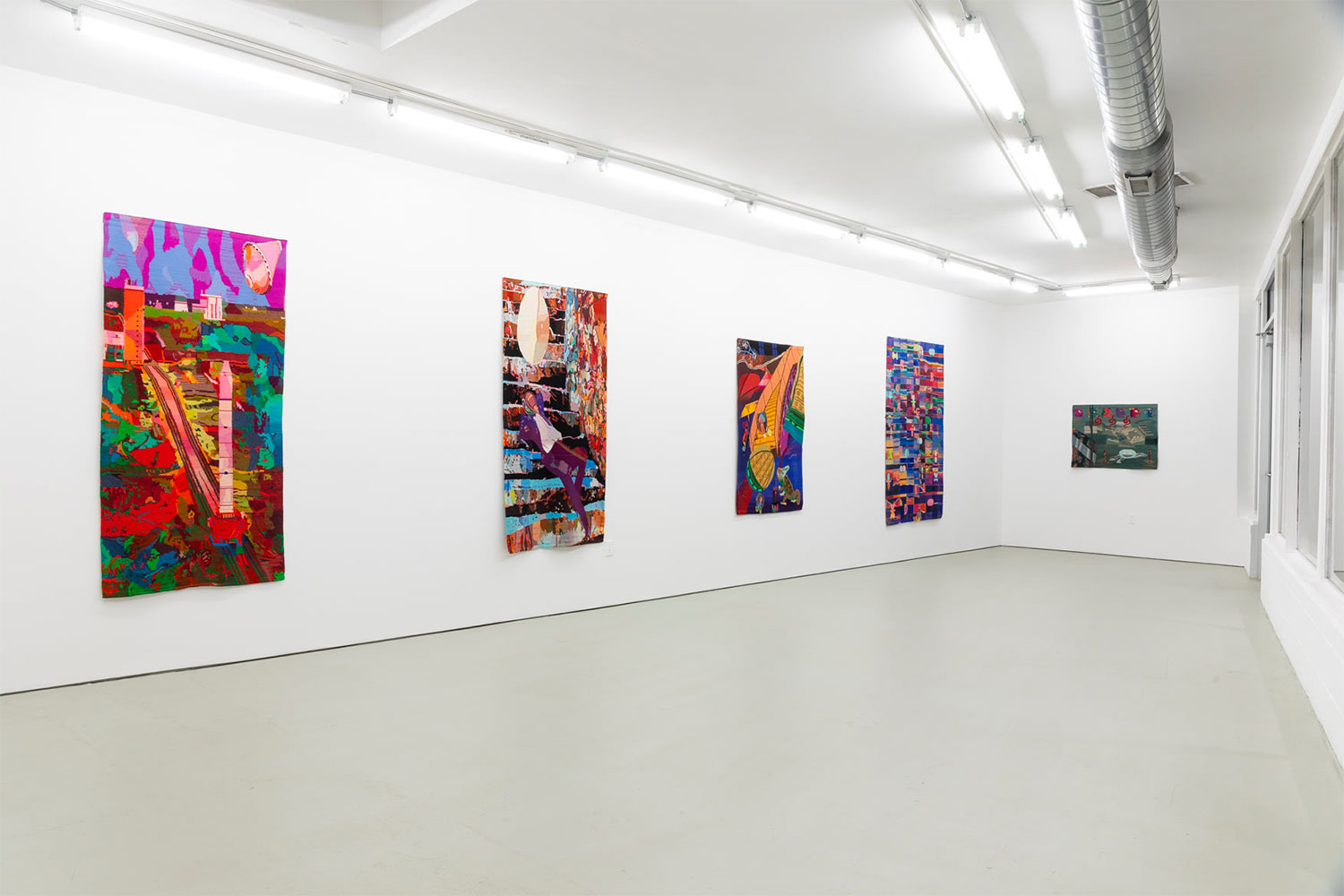 The Green Gallery is pleased to announce Sheila Held’s latest iteration of Attempts at a Unified Theory. Held’s tapestries negotiate themes of the humanities, magic, science, religion, and nature. We sense this both directly and indirectly in her offerings. Color and composition push into realms of the psychotropic while otherworldly encounters occur between figures, symbols and space. The woven objects are generous to the viewer, utilizing information that exists within our periphery. Held invites us to become entangled within the potentiality of her work.

Held started weaving during the early 1970s in Berkeley, CA. Her early ventures involved production of fabric for garments. Held transitioned into weaving tapestries during the mid-80s and has been focused on this approach since. For the past four decades she has innovated a technical approach to the floor loom resulting in a unique and visionary style.

These tapestries have always been reliant on found imagery. Held brought Photoshop into the studio during the early-90s, allowing the opportunity to aggregate source material. She has since used Photoshop as a drawing-tool to not only combine found media, but also, edit, manipulate, and layer information. Held additionally relies on preset PSD filters to generate unexpected visual scenarios. A sort of intuitive image processing emerges via this interfacing with found media and the computer.

A leap of faith occurs as these digital files are translated into analog by the artist onto the loom. A detailed graphite drawing acts as the intermediary, interpreting the visual occurrences of photoshop to a physical, binary code she follows while weaving. As yarn is woven, Held is hindered somewhat blind, only able to view the tapestry from behind as the final face of the tapestry is revealed when complete and removed from the loom. This is further complicated by color. What we see is reliant on a spectrum of available dyed wool yarn on the market. Held approximates what she observes on screen in a way similar to a printer dealing with color that is out of gamut. Through this process, we are left with intricate moments of translation between the digital and physical; unique descriptions of time, space, perspective, and being.

For medical reasons, Held is currently unable to produce at the level she has for the past five decades. The selection of works on view have not been exhibited in Milwaukee before. In addition, we will be showing a suite of preparatory drawings Held utilizes in generating her weavings. These works offer insight to the complexity of Held’s process and thinking. We hope you can join us along with Sheila, at the opening reception on Friday, January 20th from 5-7pm.

The Green Gallery is open Fridays from 1-5pm and by appointment. 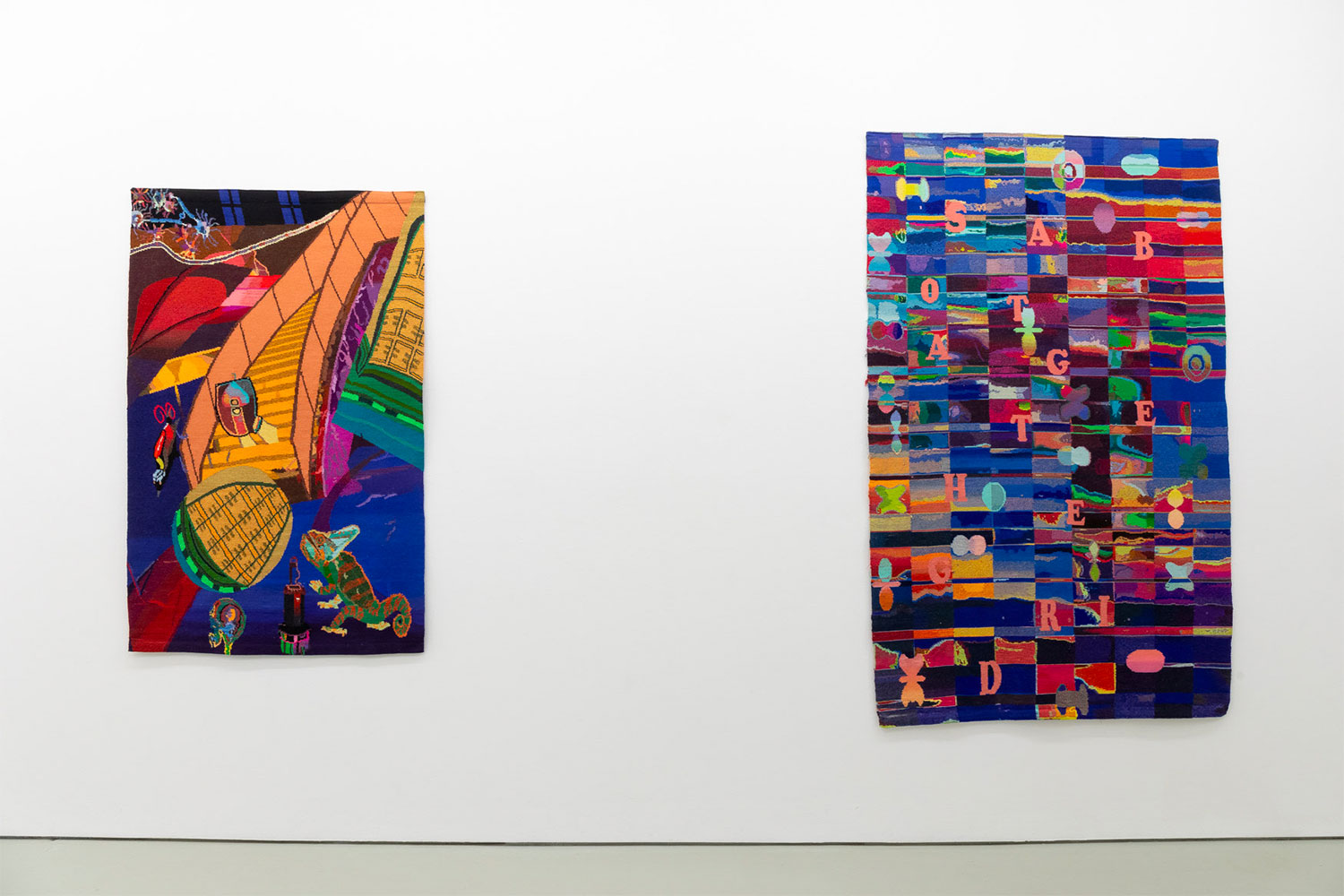 • On display at Green Gallery: Kambel Smith shrinks city down to size in “Milwaukee Recycled”