There’s no greater threat to the creative process, the common thinking goes, than “settling down.” Marriage, parenthood, and home ownership couldn’t be more different than making art, thinking about art, and living art. The former all but kills the latter. Goodbye, rolling out of bed at noon and maybe working on a new piece; hello, getting up with the kids at six and thinking about schools for the fall.

Not so, say Makeal Flammini and Colin Matthes, the wife-and-husband artists bringing their first joint show, “Domestic Animals,” to galerie Kenilworth (2201 N. Farwell Ave.) on Friday, March 23. The parents of two young children and the new owners of an East Side home, the longtime Milwaukee artists have found unexpected inspiration in the demands of family life.

“I feel free,” Flammini says. “There are no expectations. I feel better about everything I’ve made in the last year than everything in the rest of my life.”

“It’s actually a great opportunity,” Matthes adds. “I put the kids to bed, make a drawing and get excited about it, and then work on a painting that night. You don’t have the energy to be critical.” 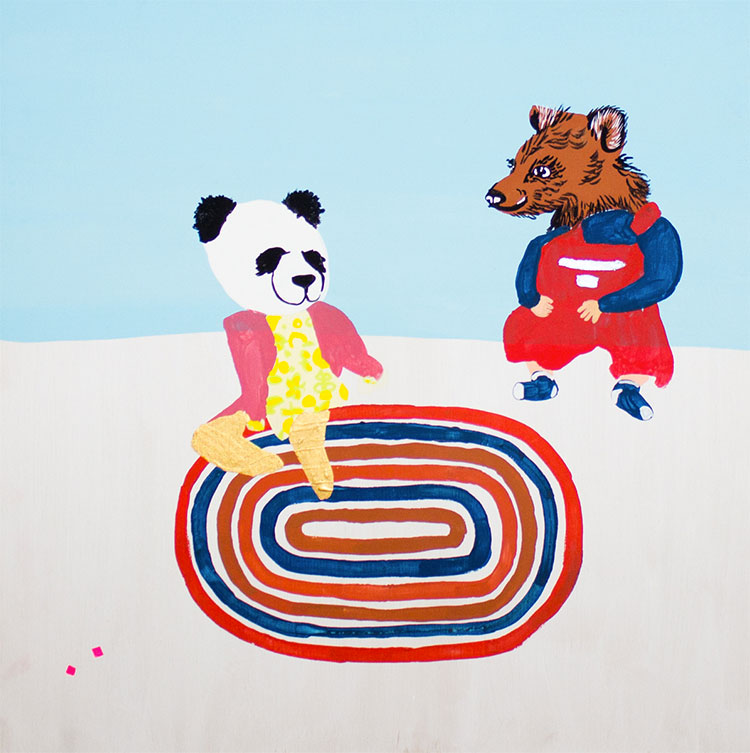 Not that it’s been a complete breeze. For Flammini, formerly of such artistic endeavors as the Parachute Project and the stealthily hilarious “Wild Wild Midwest Variety Show” on WMSE, “Domestic Animals” is a return to form after a few years of family-imposed hiatus.

“I had a total identity collapse,” she says of the months that followed the birth of her daughter, 3. “I was creating in the smallest possible way. Sometimes painting on my couch, sometimes writing on my couch. But I mostly completely abandoned everything.

For Matthes, who took up an artist residency in Belgium soon after his daughter was born and is now a gallery director and UW-Parkside, the pivot to parenthood initially came with the expected pitfalls.

“Everything gets much more complicated and more difficult,” he says. “You have less energy for everything.”

But now, with the addition of a son, 1, Matthes has found the same homebound inspiration as Flammini.

The work in “Domestic Animals” basks in that freedom, and comments on the circumstances of its creation. Flammini’s pieces catalog the detritus of domesticity—stuffed animals on rugs, meals for the kids—but also dwell on old life stories that came to the artist while she was laid up in the hospital.

“I had more medical experiences in the past two years than I’ve had in my whole life,” Flammini says. “I found it really fascinating just how badly damaged you can be, and how humans can patch each other back up.” 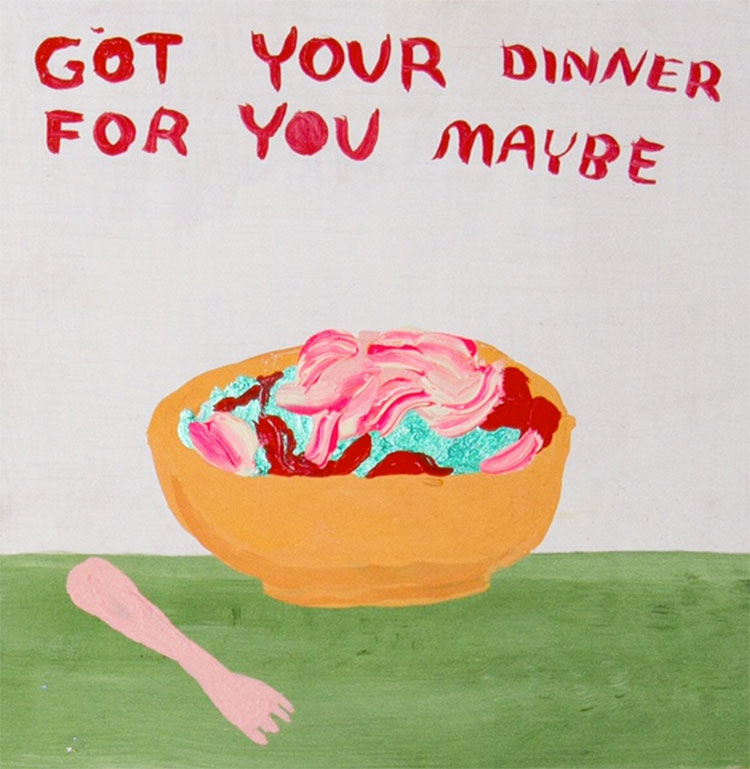 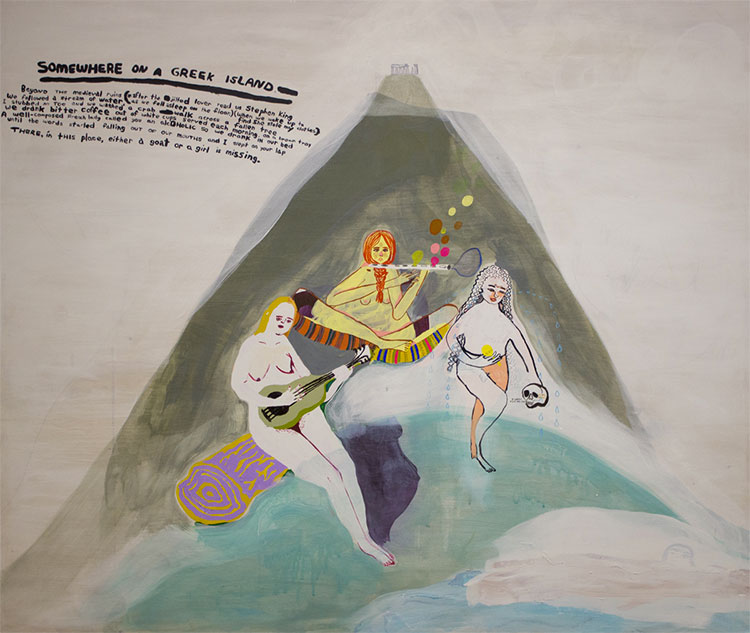 Matthes’ pieces, meanwhile, depict the kind of chaotic dinner parties familiar to late-night revelers and frazzled parents alike. And yet their initial sparks came out of an extremely quiet place.

“All the work I made for this show started with me making drawings while I put my son to bed at night,” he says. “He was sleeping in my arms, and I started doing pencil drawings of whatever was in the house. They ended up looking like dinner parties.” 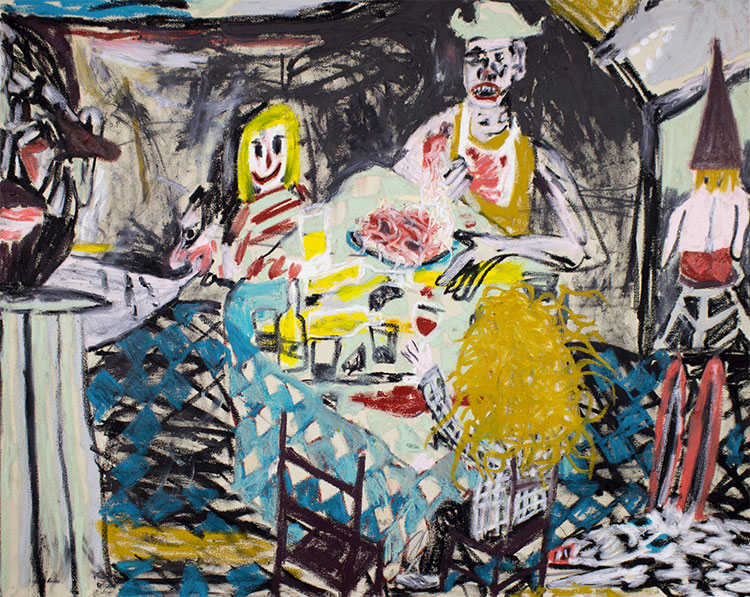 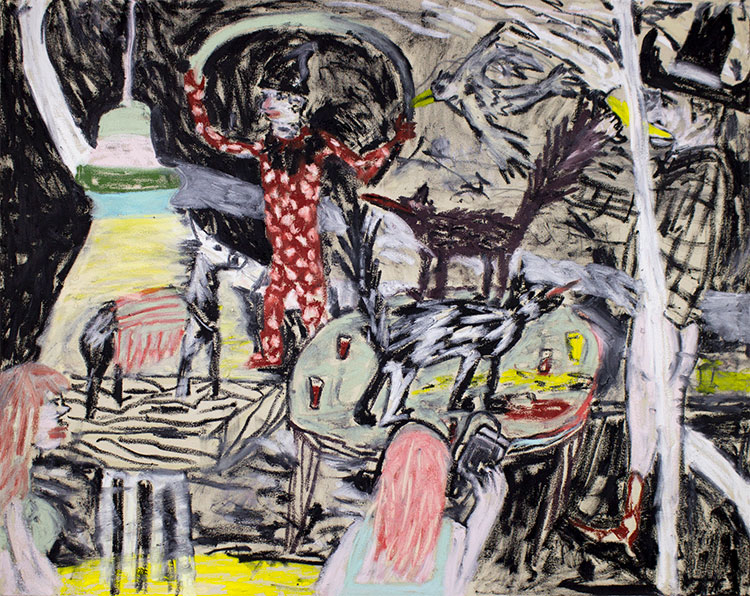 But what ends up being most fascinating about “Domestic Animals” is the dual approach. Two artists—husband and wife—experiencing the same things but tackling those things in vastly different ways. In style and sensibility, “Domestic Animals” is an exploration of cohabitation, of moving through an ever-changing life and processing it both together and alone.

“Our art has always been a really direct reflection of our experiences,” Matthes says, “but now we’re both thinking about the same things.”

“I’m really excited,” Flammini adds. “We’re super different, but we experience the same things all the time. You have your own language with your partner. Ours is a lot about art. It just made sense to do a show together.”

An opening reception for “Domestic Animals” is set for Friday, March 23, from 6-9 p.m., at galerie Kenilworth (2201 N. Farwell Ave.) Both artists will be in attendance. 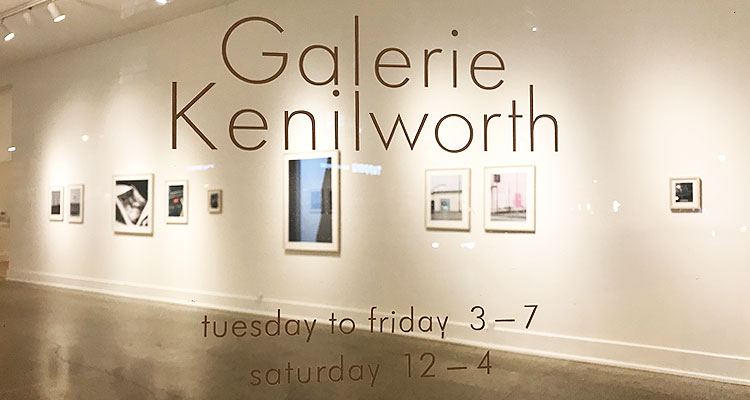