As far as career options go, professional video game player sits somewhere in between food tester and sleep study participant. Unthinkable as it is, one Milwaukee man has managed to career out of gaming with the help of a charismatic puppet he made out of an old Super Nintendo. Joe Vella got his start in entertainment as a performer (and eventually a teacher) at ComedySportz. Two years ago, he combined his love of improv, gaming, and Mystery Science Theater 3000 into BizSNES. As one of Twitch’s first and one of the gaming platforms most popular character streamers, Vella’s sole income comes from recording himself (and his plastic puppet) playing video games and streaming it online. It’s a living!

Before he competes in the PJSaltan tournament at this year’s PAX from September 1 and prior to taking part on a character streamer panel at TwitchCon in October, Vella talked about his unique occupation, the hard work that goes into making his page popular, and ways Twitch brings people together.

Milwaukee Record: Do you just want to begin by explaining your job?

Joe Vella: About two years ago, I actually left Milwaukee and I moved to Seattle with one goal in mind: to become a professional Twitch broadcaster. The first question you normally get is, “What is Twitch?” At this point, the best way I’ve found to describe it is that it’s one step past YouTube. It’s cable access television for nerds, essentially. Pretty much anyone can do this if you get the broadcasting software on your computer, they set up a webcam and microphone if they choose to, the pick a game, and start playing. But it’s not just limited to that. Now there are people who do body paint, model, computer coding—pretty much anything that’s creative. There’s a place for you to do this.

So for the last two year, almost four hours a night and five to six nights a week, I do a live puppet show on the Internet. I took an old Super Nintendo, put eyes in it, and where you put in the cartridge is now the mouth of it which it uses to talk to people. So they never see me. I’m the silent-yet-devilishly-handsome roommate. They instead see this talking Super Nintendo, complete with this whole backstory. Pretty much what I was going was to be the Mystery Science Theater 3000 of Twitch.

MR: So over a relatively short amount of time, you’ve been able to amass close to 10,000 followers and make this into a career. This is your only job, right? How were you able to make that leap so fast?

JV: I moved back to Milwaukee specifically because it’s a lot cheaper to do this here. Seattle is great, and as far as the people and things that are happening there, it’s the best place to be and it’s actually how I got partnered with some of the people that I met. It’s been a lot of work, but yeah, it’s my full-time job. I don’t do anything else but this. I’m partnered on the website. I signed a contract.

MR: So like someone in any other artistic or creative endeavor, like musicians or comedian or even a freelance writer, when did you know you were ready to take the leap and try to make a career of this?

JV: I was a ComedySportz teacher and performer here for 13 years. I started in the high school league and about five years after my high school league experience, I ended up taking over the high school league. I went to Milwaukee High School Of The Arts and in your sophomore year, you split off to become either a performance theater major or a technical theater major. I always thought I was going to be the person on stage making everybody laugh, but then I realized there was so much more joy in being a stage manager and being able to build sets, and hang lights, and bring all of these pieces together instead of being just a piece. I was really content with that for a long time, but then my students started getting awesome opportunities and I began to realize “Hey, I’m training all of these people and I know that they’re doing all these super cool things. I want to start doing super cool things.”

I knew that I wanted to do something bigger, I just wasn’t sure what. Then I just saw Twitch started getting bigger and bigger. I really liked the format, but I didn’t want to be just one more white guy yelling at a video game, so I was like “What can I do to encompass everything that I love? I love Mystery Science Theater and I love video games. Let’s try to do something in that realm.” So I found a way to rig the puppet up. I’m literally sitting there playing the video games, operating the puppet, and interacting with the chat at the same time. The worst thing about improv shows is that they end and they’re only like an hour and a half. Now I can literally do four-hour shows. The longest I’ve ever gone is 17 hours. 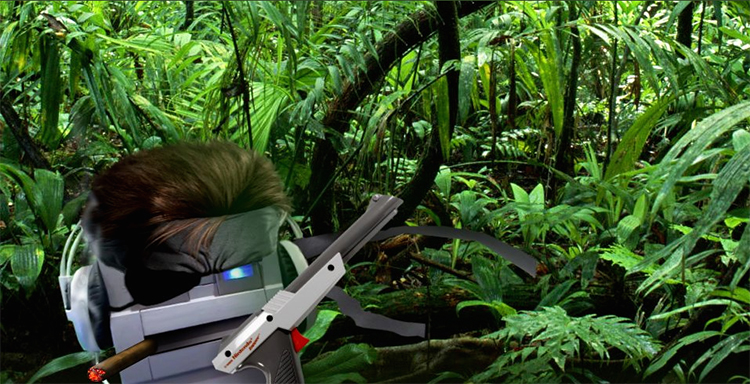 MR: So what do you feel sets you apart in this universe. I mean, why do you feel the puppetry and the humor differentiates you from all the other players and warrants a subscription?

JV: Twitch started as a way for people to watch eSports live. Then the people who were doing these eSports thought if they were playing games for eight hours a day anyway, they might as well start streaming their practices. Then the speed-runners who try to break world records came in. And then the people like me, the variety streamers, started coming in. I think what sets me apart is my experience in improv. You’re going online and dealing with trolls and that’s no different than dealing with hecklers at an improv show. I’m not the greatest video game player, so I’m trying to go at this from more of the entertainment side of it instead of just playing a video game for right hours. That’s a little monotonous, and that’s not what everybody wants to watch. Even if you don’t enjoy video games, I want you to be able to throw on my show and enjoy it.

The reason that I love Twitch is that whenever you click that “Start Broadcast” button, you’re essentially inviting everybody that follows you to sit down on your big internet couch. You’re welcoming them to come and hang out. That’s the best thing about video games. In improv, the reason that you get suggestions is the moment you get a suggestion from the audience is that you’ve now invested them. The moment you say someone’s screen name out loud, they’re a part of it now. We can have a conversation and that’s awesome. If it wasn’t so personal, it wouldn’t be as fun. 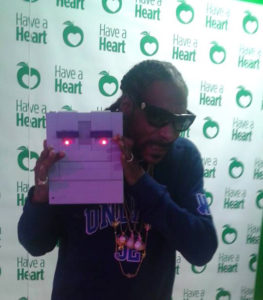 MR: What’s the most encouraging aspect of this whole livelihood you’ve made as BizSNES?

JV: When people see that puppet and their eyes light up like, “Oh my god, I’m finally seeing this thing!” it’s so exciting and cool and so fun. People will talk to an inanimate object a little easier than they will to another human being sometimes, and so it gives more people a chance to be a little more open than they might normally be.

I actually get to do a panel at the next TwitchCon called “We Want You To Be A Character.” I’m not the first character streamer on Twitch, but I’m very close. I have a backstory that I think makes it more than just an avatar. I’m literally doing the job of a TV studio. I’m the stage manager, I’m the performer, I’m playing the video game, I’m a puppeteer, and I’m doing a form of improv comedy by interacting with people in the chat.