Last February, figuring you needed a break from the endless stream of increasingly awful news and overwhelming negativity that dominates the internet, we suggested you step away from the computer and search for cats at the Milwaukee Art Museum. In the 12 months since that article was posted, both the internet and the world it chronicles have become worse, more divisive, and harder to escape. If you’re anything like us, you need another reason to unplug from the tragedy, political nightmares, and overriding sadness of modern existence.

In hopes of escaping the Internet’s cold and tight grasp, we returned to Milwaukee Art Museum just days after the Chinese New Year ushered in “the year of the dog” to scour its 35,000-plus artistic renderings in search of pooches. Before striking out to find pups, we consulted Amanda Peterson, Milwaukee Art Museum’s Director of Marketing and Communications and an adamant lover of dogs.

“I think dogs are kind of universally loved [in the art community],” Peterson says. “I can tell you that museums in America and Europe tend to have more dogs in their galleries than Asia or places that don’t have that long history of companionship.”

“I don’t think we have more dogs [than other museums], but I think we pay attention more to the dogs in our collection,” Peterson says. “We have a lot of conversations about dogs and cats in our catalog.”

Knowing at least 17 canines awaited us, we took the liberty of looking through the entirety of Milwaukee Art Museum’s public collection and rounding up every dog we could find. 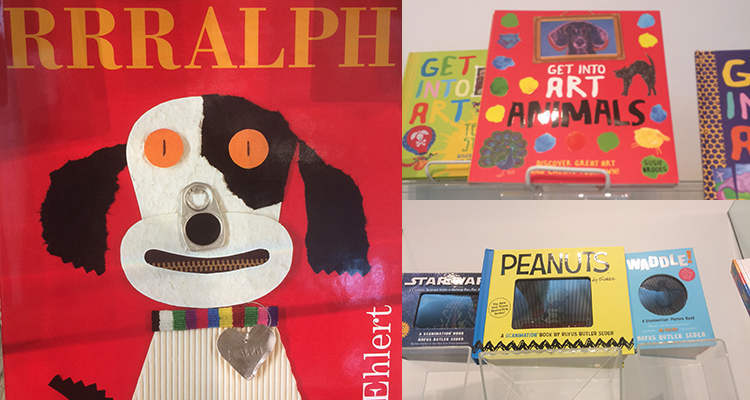 Peterson told us Alex Katz’s “Sunny #4” is one of the museum’s most famous works. Fittingly, it’s also represented in the gift shop. Last week, a pup-packed submission from MAM’s recent Artnonymous event (right) was on display near the “Sunny” merch.

Nearby, a student exhibition has its fair share of dogs as well. We were already at 17 dogs before we’d even crossed into Milwaukee Art Museum’s official collection.

The dogs only continue when crossing the Collection Entrance threshold. The eye is immediately drawn to some four-legged friends. 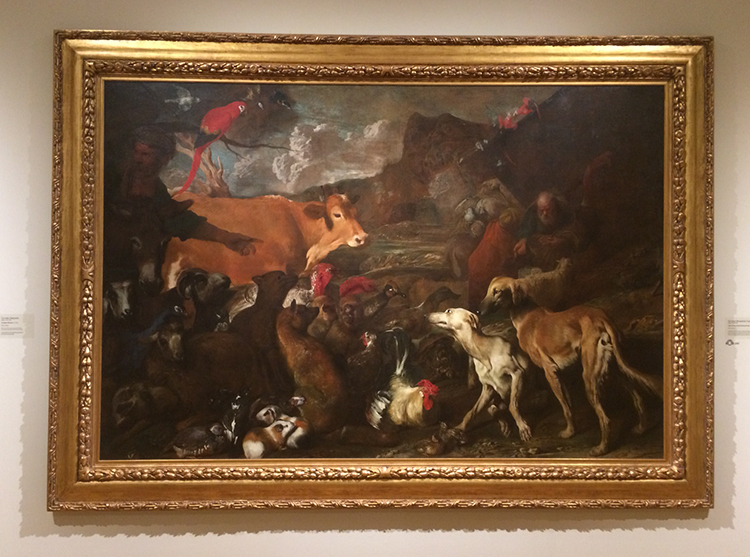 Included among them is Edwin Landseer’s “Portrait Of A Terrier,” which prominently features a Jack Russell terrier messing with a hedgehog. 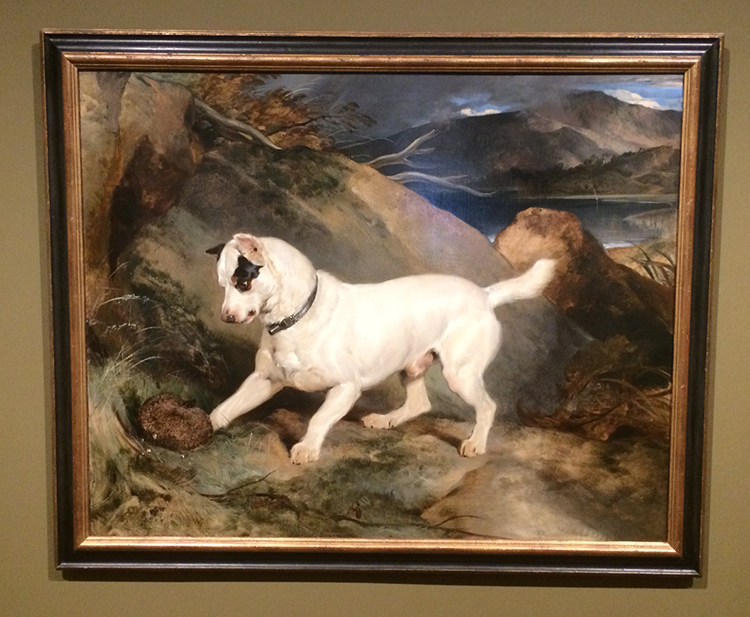 “My favorite dog is the Adam and Eve picture. The guy who commissioned it couldn’t afford two paintings, and so he got the painter to paint Adam and Eve and his dog,” Peterson says. “So after it entered a more important collection, they painted over the dog because, you know, why was this dog here? When they scanned it with modern technology, they were like ‘What is this?’ and they restored it and found the dog.” 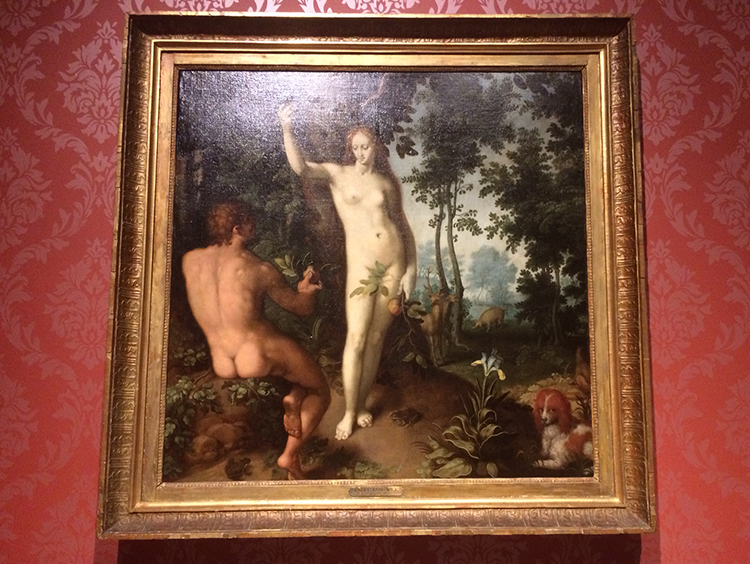 From L1, we went down some stairs to access the museum’s Lower Level, which is presently showcasing its “The Open Road” exhibition. Evocative and beautiful as the photographs that captured the spirit of the American road trip were, The Open Road was entirely absent of dogs. We moved from that zero-pup level to the Mezzanine in hopes the museum’s smallest level wasn’t also devoid of doggos.

After walking the steps to the mezzanine, we were immediately welcomed by one of the museum’s best-known works. “The ‘Rock Dog’ in the self-taught art section on the mezzanine is also another favorite piece in the collection,” Peterson says. “It’s a spotted dog that’s made of rocks.” 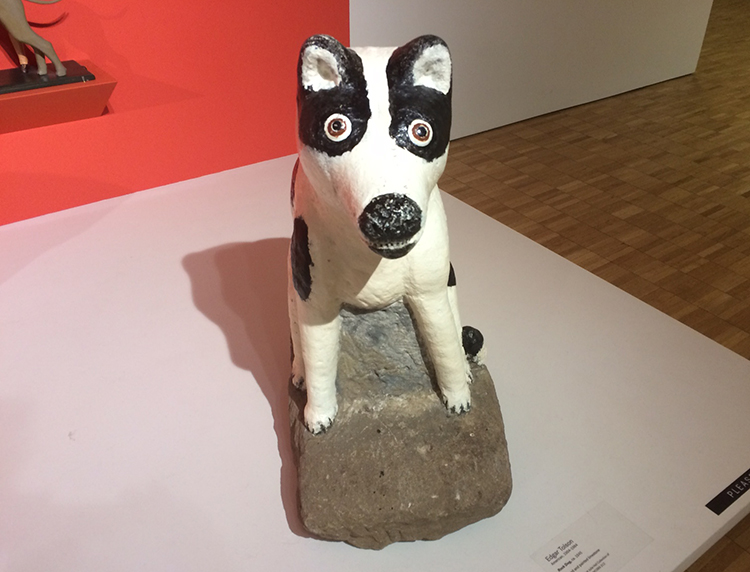 Just over Rock Dog’s right shoulder was another piece of dog-inspired folk art (right) and there were a few others elsewhere on the mezzanine as well, including Morris Hirchfield’s “Dog And Pups” (left). Though it has the least square footage of any MAM level, the mezzanine probably offered the most pieces of dog art per square foot. 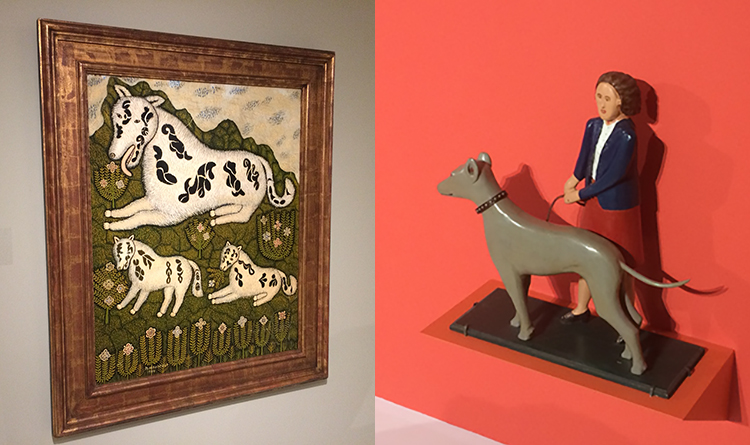 Though the previous level packed a lot of pups into limited space, it’s safe to say that MAM’s uppermost level is where the majority of dog art is unleashed. Whether the subject of paintings and sculptures or subtly incorporated as a small part of a work, dogs pretty much run wild on the museum’s second level.

“We have the German expressionism collection, which is a really big deal and it’s a fairly large collection,” Peterson says. “There are a lot of dogs in it.” 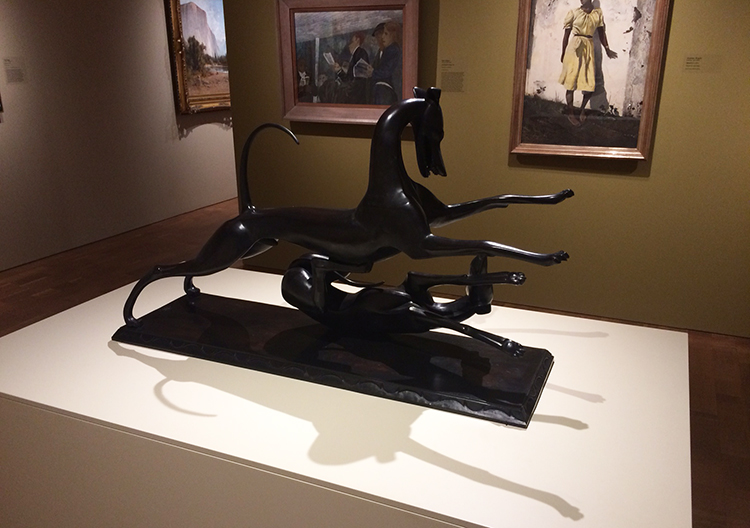 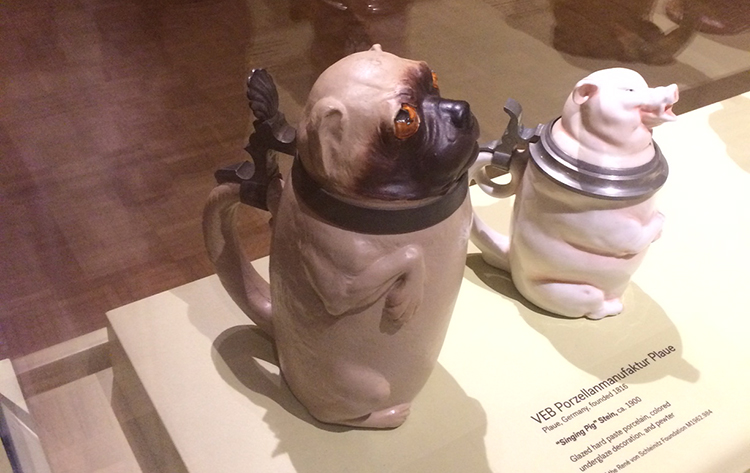 “I think the Milwaukee favorite has to be—at least it should be—a stein that’s a pug, where you open the pug’s head and drink beer out of it,” Peterson says. “It’s amazing.”

Fittingly, Katz’s goofy, pink-tongued “Sunny” is the last painting visitors see before walking down the Level 2 steps and preparing to conclude their examination of the museum’s gigantic collection. By our count, Milwaukee Art Museum boasts more than 55 dogs in more than 40 pieces of art (and gift shop items). Like last year’s cat-themed mission to MAM, we learned very little and accomplished nothing.

“Whether you’re here to look at dogs or look at brush strokes, there’s no wrong way to art here,” Peterson says. “Whatever people are looking for, we probably have it buried in a picture. We’re not judging you if you’re just here to look at dogs. It’s totally cool.”

She’s right…it was cool. Not only did we have a reason to look at the museum’s 35,000 works in search of a very specific component, we also got to temporarily unplug from the misery machine for a while, dip out of the everyday grind, and simply spend a day somewhere pleasant in the company of man’s best friend. 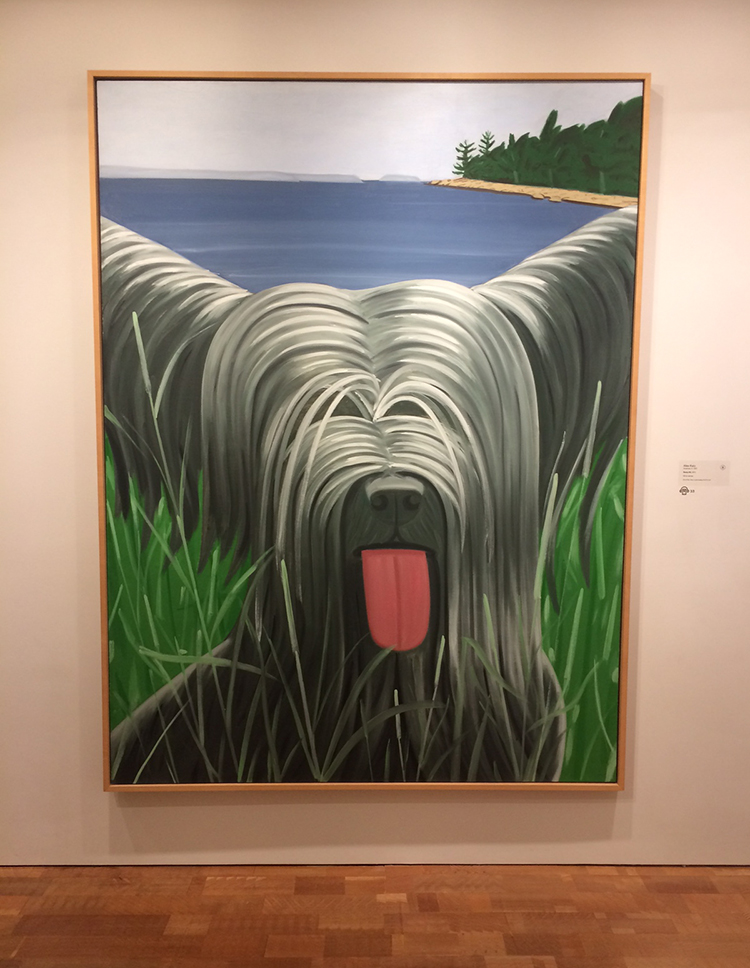