Menominee Nation Arena in Oshkosh was packed with Wisconsin Herd fans at a nearly full capacity on Saturday, February 3. A daylong snowstorm caused a few patches of empty seats, but the rest of us were treated to the best Wisconsin’s new NBA G League team had to offer—in the first half, anyway.

The “G” in G League stands for corporate sponsor Gatorade—which does wonders for athletes…and anyone with a hangover. The Bucks affiliate is one of four expansion teams added this year to what was formerly known as the NBA Development League. In a new and revamped era, it seemed fitting to watch the Herd compete against another team in its maiden season, the Memphis Hustle. The tip-off was lofted at 7 p.m. in the city that’s synonymous with baby jeans. 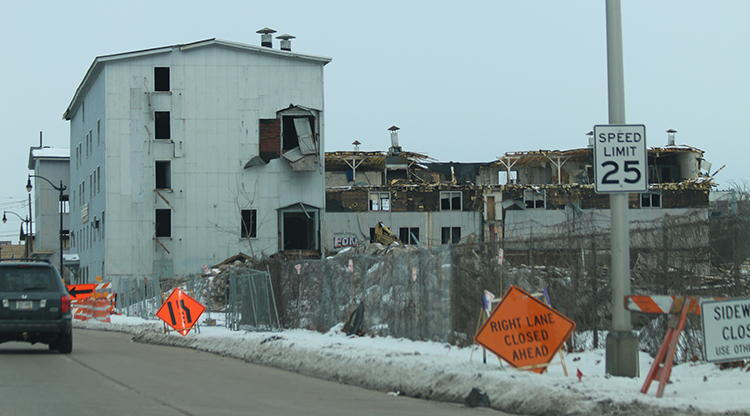 Having lived in Oshkosh for years, it was a thrill to see that one of its many decrepit buildings (the eerily abandoned Buckstaff Furniture Company) had been bulldozed and replaced with something sure to energize the community. The positive vibes in the arena were contagious. The Herd may be struggling to stay above the .500 mark, but that had no effect on the joyful atmosphere in the slightest. Though some of us were uneasy about driving home later as the flurries kept piling up, there is no more perfect metaphor for the value of a sport than the way it can lend us shelter from a storm.

The gorgeous and spacious arena can hold about 3,200 people, and while some of us nerdier Herd followers hunkered down in their seats with a pen, notepad, and Pepsi, others made friends and mingled throughout the concourse area. Off-court attractions include four concession stands, two party decks, the Verve VIP lounge, and a bar called The Maple Pub. 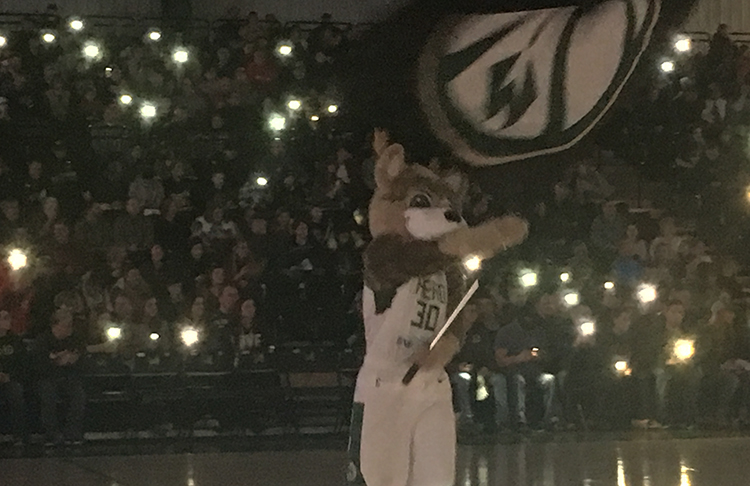 After a little girl stole the show with her rendition of the “The Star-Spangled Banner,” the Hustle were given a nonplussed introduction unique to basketball teams on the road, a rushed monotone mumble used to contrast the hype the home team gets. To showcase the Herd, the lights went out as fans were encouraged to raise their glowing phones. The scene conjured images of fireflies. Fireflies who liked to party. 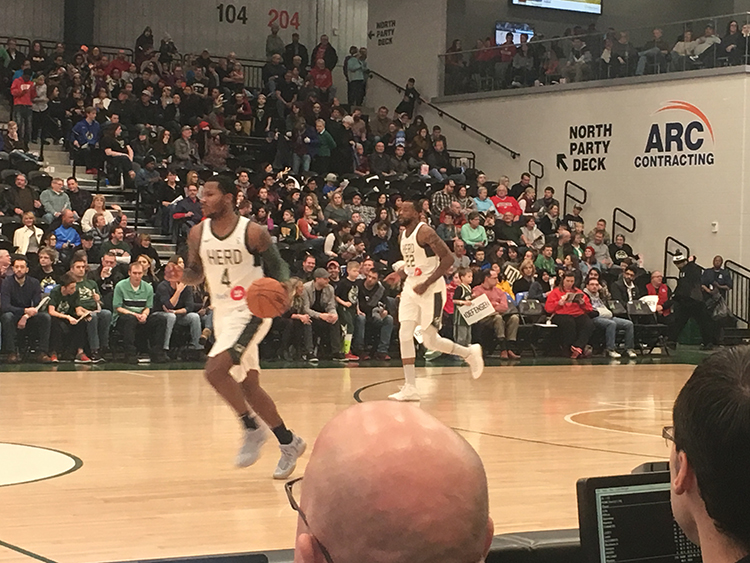 The Herd’s starting lineup included two All-NBA G League standouts—Ukrainian forward Joel Bolomboy and guard Xavier Munford. The latter is inked to a two-way contract with the Bucks that essentially gets him closer to a roster spot in the Association. D.J. Wilson, Milwaukee’s first-round pick in the 2017 Draft, also began the game on the floor. The trio displayed NBA-caliber talent as well as the kind of growing pains evident in developing players. The way the evening went for the Herd, that dichotomy was clearly split between two halves.

The first half electrified the home crowd. In their retro red uniforms that evoked movies like Boogie Nights and Semi-Pro, the visiting Hustle struggled on defense and shot the ball atrociously. On the other hand, the home team quickly got into a rhythm. The Herd thrived, chiefly in transition, where at least one fast-break dunk by Munford seemed perfectly suited for a “Boomshakalaka!” or “Razzle Dazzle!” punctuation.

It’s a beautiful thing to watch a basketball team playing in concert with each other. To be near the court and see the timing, swagger, and selfless chemistry all blending together is worth the price of admission—and in the G League, tickets come at a lower cost than seats to watch the expansion team’s NBA counterpart.

Breaks in the action bustled with fan games ranging from Bucks trivia to a two-on-two race to roll a friend out of a carpet wrap, allowing them to pick up a basketball and make a layup. (Side-note: Anybody else miss Double Dare?) During halftime, when the Herd were up 61-46, grade school kids took the floor and played a shortened game. During another break, “The Kiss Cam” brought a compelling mix of dread, awkwardness, excitement, and voyeurism to Menominee Nation Arena. This fan went un-kissed. 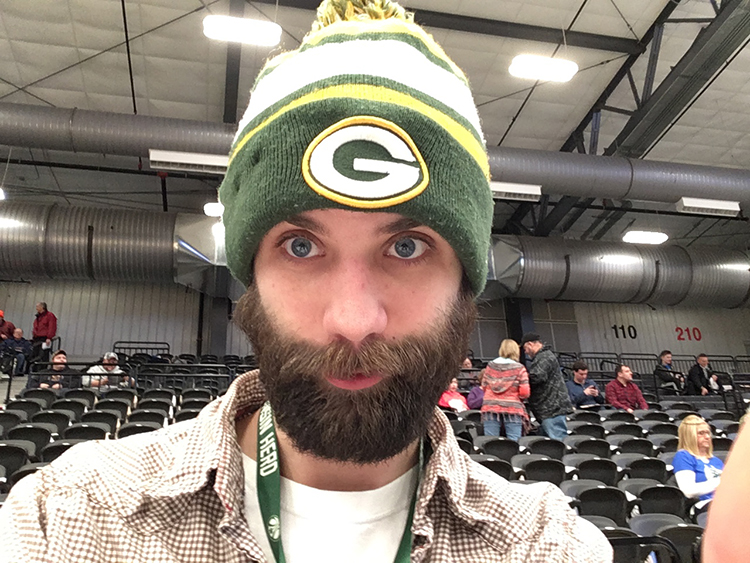 The first half was as heartening for the Herd and their fanbase as the final 24 minutes were devastating. Former Kentucky Wildcat Marquis Teague caught on fire for the visiting squad down the stretch. The Herd officially coughed up their lead when Teague buried a three-pointer early in the fourth quarter. Memphis never looked back. Teague led all scorers with 25. Wisconsin tallied a dismal seven points in the fourth quarter.

The Herd dropped to 17-17 and got bested by a sub-.500 squad on a night when Wisconsin once led by 24 points and wound up losing by 19. The final score was 104-85 in favor of the bad guys. Though witnesses to a meltdown, it was still a great experience. And what the hell? A little frustration doesn’t hurt when it can be channeled into an ice scraper as fans tended to their frozen windshields in the parking lot.

Whether the outcome the team delivers is something closer to euphoria or nausea remains a tossup, but the dazzling venue and the revived spirit of an unsung college town are likely to make the trip from Milwaukee to Oshkosh worthwhile. The drive is about 88 miles each way. One could cover that distance to watch the Herd fall victim to a 43-point swing and still not regret a thing.

The Wisconsin Herd hosts the Grand Rapids Drive on Friday, February 9 and the Long Island Nets on Saturday, February 10. Tickets are still available.