For those of you who don’t recall (or maybe never knew it in the first place), Milwaukee once was home to an Arena Football League franchise. Actually, the city was twice home to an AFL organization. The Milwaukee Mustangs played in the Bradley Center from 1994 to 2001, then came back again from 2010 through 2012 (after the Milwaukee Iron were promoted from the “af2” developmental league and renamed). Let’s not get into that second stint, however, because it’s not important. You’ll soon find out why.

Anyway, the first iteration of the Mustangs wasn’t exactly exceptional. The franchise actually started with a 0-12 campaign in 1994. Over the course of the eight-season span, Milwaukee only made the playoffs four times. The team never won its division, never won its conference, and failed to ever bring a championship back to Milwaukee. Though there were some standouts—at least by Arena Football League standards—like a wide receiver/linebacker hybrid named Gary Compton (who scored 176 career touchdowns!), the team’s most notable player is probably Bret Bielema, who didn’t do anything as a Mustang but later made a name for himself in Wisconsin as the head coach of the Badgers and a certified pudd after his time in Madison.

Sure, the Mustangs’ attendance was nearly twice the Arena Football League average. Yes, they led the league in attendance in 1996. Okay, there were surely some fun players and unforgettable moments over the course of those eight seasons of Milwaukee Mustangs football. But really, none of that matters at this point. Now almost 20 years since the short-lived sports franchise played its last down (again, we’re not counting the second iteration, which wrapped up eight years ago at this point), the Milwaukee Mustangs could and maybe even should be a forgotten commodity that basically just held football-hungry fans over during the Packers offseason. That said, there’s one reason the memory of the Mustangs will live on forever: the uniforms.

We’re not exaggerating when we say the Milwaukee Mustangs might have the best uniforms in the history of Milwaukee—no, in the history of WISCONSIN—sports. Is the Brewers ball and glove uni better? Nah. Bucks new “Cream City” jerseys? Close, but no cigar. The Admirals skeleton? Get the fuck out of here! (The old little Admiral guy logo was pretty cool though.) Bucky Badger? As if. Simply said, the Mustangs logo, color scheme, and everything else about the inform straight-up destroys all other teams in the state in terms of style. Even the Timber Rattlers’ one-off Wisconsin Udder Tuggers variant doesn’t hold a candle to the ‘Stangs look of yesteryear. 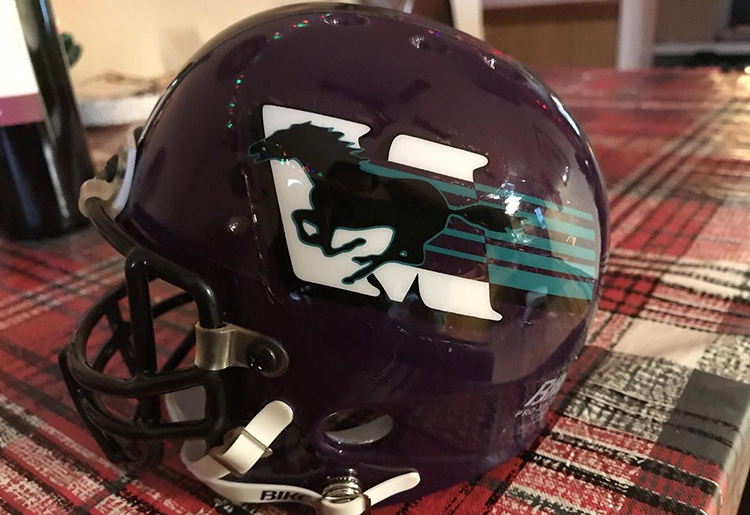 Look at this perfect confluence of teal, deep purple, and white! Awesome. 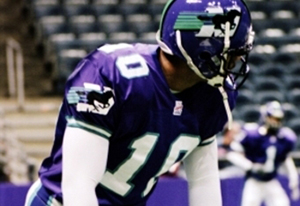 Check out the way the logo itself manages to look like a ’70s or early ’80s throwback while the color scheme just screams mid-’90s. When they come together, it looks like something people would wear without a stitch of irony today. See how cool this player looks in the uniform? Man, this is a sweet look. The purple jerseys were their home uniforms, but the team’s white jerseys didn’t look half bad either. 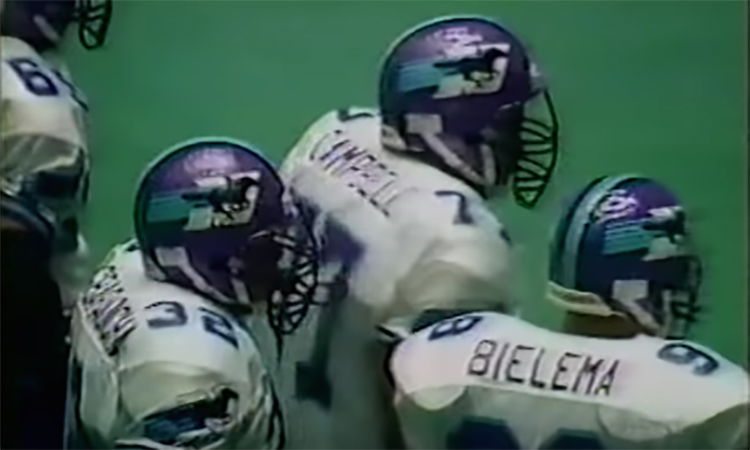 So yeah, there’s not much else to say. The city used to be home to an Arena Football League franchise called the Milwaukee Mustangs and the team’s uniforms were incredible. At least the first time around.

When the team returned to the field in 2010, this was there logo. Nope! Just terrible. Sucks. So while you’re watching the Brewers in the team’s brand new uniforms, checking out the Packers in a few months (maybe), and seeing Cream City on Giannis’ chest during the Milwaukee Bucks playoff run, think about the real king of Wisconsin sports logos…the 1994-2001 Milwaukee Mustangs.