Even though the NFL Draft has come and gone, there are still a lot of uncertainties surrounding the Green Bay Packers in 2020. No doubt the biggest question there is in regard to first round draft pick Jordan Love. Just kidding! We can’t believe you fell for that. You probably clicked this article because we used his picture. Hilarious! The Packers will keep rolling with Aaron Rodgers (who, in all honesty, is a grown up who probably couldn’t care less about Love being drafted) as long he’s healthy and effective, then Love will get his shot when the time comes and—based on the footage we’ve seen—will be an outstanding replacement. There’s no reason to think otherwise right now, so maybe stop talking about it. Cool?

Anyway, the REAL biggest question about the 2020 Packers is whether they’ll even have a season. As we write this, Brown County cases of COVID-19 are spiking and things only appear to be getting worse. Call us crazy in a comment we won’t read, but in all likelihood, we guess this season either won’t happen at all or it will be shortened and played in an empty, neutral stadium. Cool!

However, in the instance this deadly pandemic suddenly vanishes out of the blue and there is a 2020 NFL season by some miracle, we now know who the Packers will be playing. Yesterday, the team’s home and away opponents were announced. Game dates and times have yet to be confirmed, but Packer Backers can at least dream about games at Lambeau and trips (which, in all likelihood, will also not occur) to see the Green & Gold take on Tom Brady’s Buccaneers in Tampa this year. Here are Green Bay’s eight home and eight away opponents in 2020, along with some bold predictions sprinkled in because we’re bored and miss football.

Detroit Lions
Unlike like last year’s Packers come-from-behind win at Lambeau (partially thanks to some questionable officiating), Green Bay runs away with this one…literally. Aaron Jones has three touchdowns on the ground. Maybe rookie A.J. Dillon has one too. Why not? Okay, Dillon gets one too!

Minnesota Vikings
The Vikings extended Kirk Cousins through the 2022 season. That has little bearing on this game, but it just feels good to type. Packers win. We don’t know how.

Atlanta Falcons
The NFC South looks pretty good going into 2020…except for the Falcons. Even their new uniforms suck. As long as Green Bay doesn’t chalk this one up as a gimme before taking the field, they should win handily.

Carolina Panthers
While the home field advantage will certainly help, the Panthers have been a tough opponent for the Packers in recent seasons. Hopefully this game, like last season, will take place late in the year and it’ll snow a bunch. Um, Packers win? It might be a close one, though.

Tennessee Titans
If the Packers can stop the run, they win because Ryan Tannehill is the quarterback. Sadly, they can’t stop Tennessee’s impressive backfield this time around and Green Bay falls to the Titans at home.

Philadelphia Eagles
We’re just now realizing we currently only have the Packers losing one home game in 2020. Whatever! Green Bay—who lost against Philly at home last year—will right the ship and best Doug Pederson’s Eagles. Rodgers has such a great game that they give Love some snaps in the fourth quarter and he show tons of promise too. Sports talk radio idiots lose their shit.

Minnesota Vikings
There always seems to be one game every season where the offense scuffles, but Mason Crosby hits like four or five field goals to help Green Bay eek out an ugly win. This will be that game.

New Orleans Saints
New Orleans is always one of the toughest places to play and the Saints have been good for pretty much the past 12 years. Sadly, those factors spell a rare loss for A-Rodg and the boys.

Tampa Bay Buccaneers
The Packers travel down to Tampa to take on Tom Brady’s Buccaneers. That’s still so weird to think about. Brady has a good good game, connecting for touchdowns with Rob Gronkowski, Vincent Brisby, and Deion Branch. Kevin Faulk rushes for 80 yards and catches five passes. Tedy Bruschi has a sack. It’s a high-scoring game, but the Pack’s potent offense comes out on top. (Get it? Those players we mentioned earlier were all old Patriots players. We thought it was funny.)

Houston Texans
With competitive tag TV show host J.J. Watt out with yet another injury, the Packers outduel Deshaun Watson and company to pull off a nerve-racking road win. Just a reminder: the Bears drafted Mitchell Trubisky instead of both Deshaun Watson and Patrick Mahomes.

Indianapolis Colts
With new weapons Phillip Rivers and former Badger/current Toppers franchise owner Jonathan Taylor at their disposal, the Colts edge out Green Bay for an unexpected win in Indy. Madison area Toppers locations offer a $14.99 “Two Large Pizza and a Triple Topperstix” special leading up to the game. That’s a good deal!

San Francisco 49ers
Ugh. We want to say the Packers will win, but…yeah. Actually, screw it, we’ll just say it. Despite having no answer whatsoever for the Niners in either of their meetings last season, the Packers win. We’re just guessing anyway. Plus, it’s not like the 2020 season will even happen.

If the season does take place, though, Green Bay will go 13-3 and win the division. Go Pack Go. 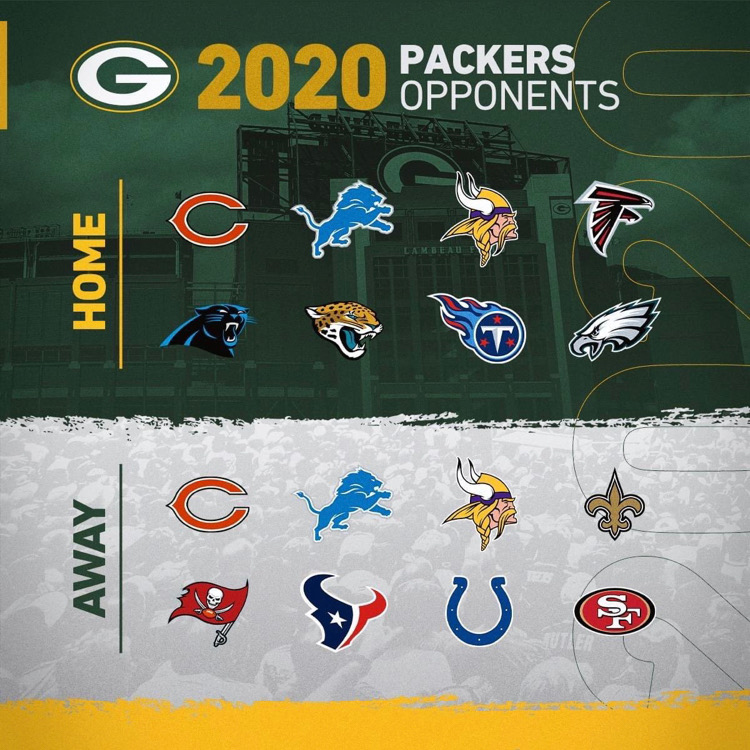