Right now is a great time to be a professional wrestling fan. The wrestlers are more athletic than ever, the matches are better than ever, and there is more of it to watch than ever before. WWE puts on seven hours (!) of live television every week, AEW puts out another two hours, and Impact Wrestling, MLW, and Ring Of Honor all have their own weekly shows on television. Gone are the days when everyone bowed to WWE’s reign.

The sheer amount of television does come with a cost, though. Television wrestling means contracts, and contracts mean less talent available to work on smaller shows like Great Lakes Championship Wrestling‘s Blizzard Brawl.

“The change of the landscape in pro wrestling with more independent wrestlers being signed, the talent pool has been less available for us than in year’s past,” GLCW promoter David Herro says.

Blizzard Brawl has been a staple in the Milwaukee area since 2005, something that Herro originally didn’t intend on.

“I thought I would just do one in 2005, and it morphed and kept growing and here we are today, 15 years later, with the 15th anniversary show.”

“In the beginning, when I took the show over, I had zero matches booked,” Herro says. “Everyone that we thought we were going to get was not available.”

Herro’s 15 years of experience of Blizzard Brawl, along with a history promoting GLCW shows since 1996, really helped him put this one together, as he was able to seek assistance from throughout the world of professional wrestling.

“I’ve been doing this now for quite a while, so I called in a lot of favors from a bunch of my buddies,” Herro says. “I called some friends of mine that work for AEW. I said, ‘Hey, I know you have a few talents that are untouchable, but who can I bring in on such short notice?’ We were able to get Shawn Spears, Marko Stunt, and Luchasaurus. Luchasaurus, I knew was very popular. I didn’t realize how crazy popular he was with the fan base of today.”

Luchasaurus, for those that don’t know, is a wrestling dinosaur with a PhD (and a stint on Big Brother) who chokeslams people, does flips, and hangs out with Luke Perry’s son. What’s not to love. He’ll be leading a team against MLW’s Davey Boy Smith, Jr. at Blizzard Brawl. Those two squaring off is an interpromotional dream.

Marko Stunt, Luchasaurus’ stablemate in AEW’s Jurassic Express, will also be appearing on this show. The 5’2″ stunt made an amazing, NSFW debut at Game Changer Wrestling in November of last year and has been one of the most beloved wrestlers on the scene since. While the internet likes to argue about his size and “believability,” they miss the huge reactions he gets in every city and the entertaining matches he wrestles in. This show should be no different on both fronts.

Herro didn’t stop with the AEW stars when putting together this year’s Blizzard Brawl. He put in a call to longtime friend, WWE Hall of Famer Rikishi.

“I said, ‘Hey, Uce. I need you, I need your son. What can we do?,’ Herro says. “So I got Sefa and then his nephew Jacob was available as well. I grabbed as many Samoans as I could possibly find.”

Milwaukee fans may remember Jacob Fatu from AAW at Turner Hall this summer where he absolutely stole the show in his wild brawl with Sami Callihan. He’ll be teaming with his cousin here against AEW’s Shawn Spears, the former “Ten Guy” Tye Dillinger in WWE, and a partner.

The calls didn’t stop there. WWE’s Hall Of Fame pimp, The Godfather, is being pulled away from his surreal post-wrestling career, managing a strip club (Cheetah’s in Las Vegas), to appear in Waukesha.

Former WWE vet Al Snow has been a key part of Blizzard Brawl’s success through the years.

“Al’s my best friend and my mentor,” Herro says. “He’s the one who has helped me the most as far as learning the psychology of professional wrestling. He’s always been the one constant; the one I could always go to if I get into a bind trying to put the show together.”

Herro says this show aims to have a little something for everyone. The card is filled with names you might know: former WWE stars like Rikishi, Godfather, and Melina Perez; ECW standouts like Snow and Tommy Dreamer, Milwaukee’s own Beer City Bruiser, and the incomparable Swoggle (a.k.a. “Hornswoggle”), and food truck owner ODB are all a welcome addition to this show who are sure to have legions of fans in attendance. Still, it’s the young wrestlers like Luchasaurus, Stunt, and Fatu who are opening up Blizzard Brawl to a larger audience.

“I didn’t know how this show was going to be received because it’s not the traditional WWF or WWE Attitude Era, early-2000s-type show,” Herro says. “The response has been this is the best show that I’ve ever put together.” 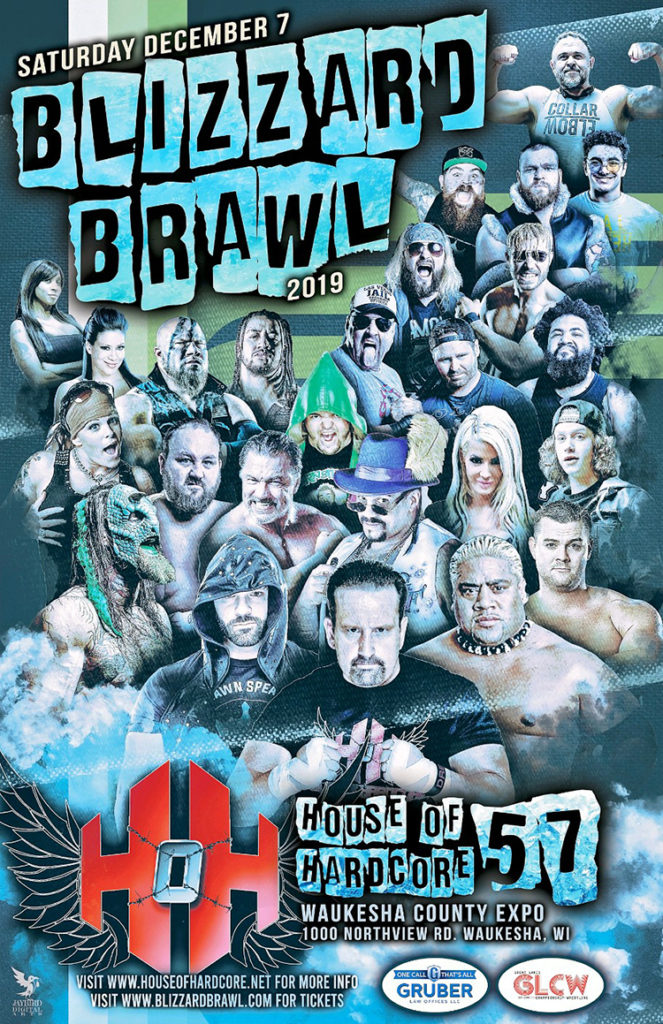