Sunday afternoon, 41,237 people enjoyed watching the Milwaukee Brewers defeat the Cincinnati Reds 7-5 at Miller Park. Among those 41,000-plus people was local sports radio person Bill Michaels, who most decidedly did not enjoy the game.

“Seriously…I just wanted to enjoy the Milwaukee Brewers game as a fan today,” Michaels grunted in a Facebook post and a similar tweet. “Are baseball fans in Milwaukee completely bereft of etiquette? You can’t be this inconsiderate or stupid…or can you?”

You see, Michaels was watching the game from his seat along the first base line, and a bunch of fellow fans (and a beer vendor) were getting up and down from their seats, blocking the sportscaster’s view. So what did the professional adult with tens of thousands of social media followers do? He got out his phone and recorded and posted a four-minute video of his harrowing experience. The four-minute video, we might add, was filled with dozens of unsuspecting strangers—and more than a few children.

So, um, yeah. Do we really have to say this? Don’t do that. DON’T POST SHAMING VIDEOS OR PHOTOS OF STRANGERS AND CHILDREN ON SOCIAL MEDIA. Just don’t. Seriously. What’s wrong with you? 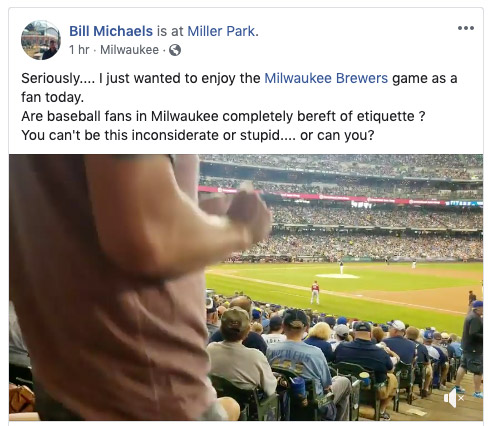 Incredibly, despite plenty of folks taking Michaels to task for his Bad Take, the radio host doubled down. “This will be a topic on tomorrow’s (Monday) show and I hope you or someone you know or recognize is in this video,” he wrote in a Facebook comment. Later, Michaels posted the full video to YouTube. We won’t link to it here, because, again: DON’T POST SHAMING VIDEOS OR PHOTOS OF STRANGERS AND CHILDREN ON SOCIAL MEDIA.

Does Michaels have a point? Yeah, it kind of sucks when people…you know what, it doesn’t matter, because, again: DON’T POST SHAMING VIDEOS OR PHOTOS OF STRANGERS AND CHILDREN ON SOCIAL MEDIA YOU PETULANT WEIRDO.

A similar thing happened earlier this month when (now-former?) FOX6 photojournalist Adam Hansen posted a photo of a child at Miller Park. “At the Brewers game. Sitting 2nd row,” Hansen tweeted. “The kid in front of me is sitting on his phone watching YouTube videos with his earbuds in. Smh. What a waste of a ticket.”

Smh indeed, Adam. What happened next was almost too predictable to be true: hundreds of people piled on Hansen for posting a photo of a child (and for Hansen being on his phone), people combed through Hansen’s Twitter feed and dug up dozens upon dozens of incredibly racist tweets, and the little twerp deleted his social media accounts. You can read all about it HERE.

Once again, any small points both Michaels and Hansen may have had—it’s kind of rude of people to block your view during a game, it’s kind of disheartening to watch someone stare at their phone during a game—are rendered absolutely moot when you post shaming videos or photos of strangers and children on social media, which is something YOU SHOULD NOT DO.

To quote Michaels: You can’t be this inconsiderate or stupid…or can you?