It’s been well over a decade since flat track roller derby began its modern revival in Austin, courtesy of the Texas Rollergirls. Since those heady days of punk rock, fishnet, and wacky names like (retired Texas skaters) Cheap Trixie and Lucille Brawl, women’s flat track roller derby has exploded into a worldwide phenomenon with 380 leagues recognized as full members of the Women’s Flat Track Derby Association (WFTDA). Since 2006, Milwaukee’s own roller derby league, the Brewcity Bruisers, have evolved from a ragtag crew of novice skaters engaging in halftime pillow fights and penalty cages, to a badass crew of hard-hitting high-level athletes, albeit still with the crazy-ass names. (Our favorite new additions: Anita D’Groin and Philadelphia transfer Holden Killfield). This Saturday kicks off season 11 of Brewcity Bruiser action (seven of which have been held downtown at the UWM Panther Arena), as the defending champion Rushin’ Rollettes take on last year’s runners-up, the Crazy 8s, and the Shevil Knevils face Maiden Milwaukee.

Always been curious about catching some roller derby, but been afraid you’d have no idea what’s going on? Or maybe you’ve seen some clips and initially thought, “The hell is going on?” Hey, that’s why we’re here. Courtesy of your humble author and (full disclosure) Brewcity Bruisers announcer, Milwaukee Record is here to feed you some basics on enjoying your first night at the bouts. 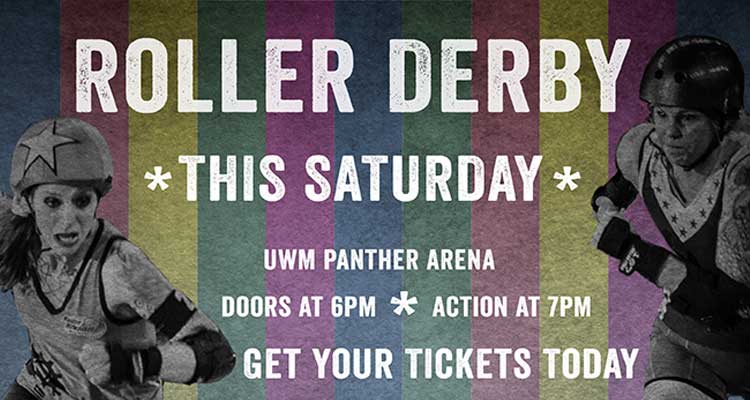 1. What the hell is going on?
Basically: Roller Derby is a game where two teams, fielding five people per team, skate around a track and try to pass each other in order to score points. One person on each team is allowed to score, while the other four block, running interference on the other team while opening holes for their scorer. There are three positions:

Jammer – The jammer wears a star on her helmet and is the only skater on either team allowed to score points. A point is officially scored when the jammer’s hips pass an opposing skater’s hips.

Blocker – Blockers block, duh. Their goal is to open holes in the pack of skaters for their jammer to break through and score points, while closing ranks around the opposing jammer (the “pack” is defined as the largest group of skaters on the track with members of both teams).

Pivot – One of the four blockers on each team wears a stripe on her helmet. The stripe gives the skater the ability to accept the star covering from the jammer, should she decide to abdicate her sacred point-scoring responsibility. The pivot then becomes the jammer and takes over scoring for her team. Got it?

2. How the hell does this work?
The game is played in two 30-minute halves, divided into two-minute bursts of action called “jams.” During the jam, the jammers (who start behind the other skaters) attempt to pass the blockers and score one point per player passed. However, the jammers don’t actually score until the second pass. During the initial pass, the first jammer to break through the pack legally earns the title of “lead jammer.” Why does this matter? Because the lead jammer has the ability to stop the jam before the two-minute mark by putting her hands on her hips in a repeated motion. Why would she want to call off the jam? Well, if she manages to pass through the pack before the other jammer, she’d already have up to four points, while her counterpart may not have scored any yet. Pretty good time to stop the jam and prevent the other person from scoring, don’t you think? Once the jam is done, there’s a 30-second reset while the teams line it up and get ready to do it all again.

3. Hey, why did that skater get kicked off the track?
Probably because she committed a penalty. Like in hockey, a penalty sends a skater off the track, leaving her team to skate short-handed for the penalty’s 30-second duration. There are plenty of different infractions, but the most common ones you’ll see are illegal blocks and “cutting the track.” Illegal blocks consist of the same typical moves that are illegal in other sports: elbows, low blocks, back blocks, forearm shots to the head, use of brass knuckles, etc. Cutting the track happens when a skater is forced out of bounds, but comes back in bounds ahead of a skater that was behind them on the track when they got knocked out. Very often you’ll see a blocker knock a jammer out of bounds, then skate backwards to fall purposely behind the rest of the pack. The jammer then has to come back in bounds behind the blocker so she doesn’t draw a penalty. Strategy!

4. Which team should I root for?
Hey, we’re not your dad—pick for yourself. If you’re a fan of dominant sports dynasties, you’ll probably be a fan of the ninja-inspired Crazy 8s or the socialist sweethearts, the Rushin’ Rollettes. Out of 10 previous home seasons, these two teams have each won five titles. If your heart is typically with the underdog, check out blue-collar Maiden Milwaukee or the daredevil Shevil Knevils. That being said, all four teams have undergone some big personnel changes this offseason and all have a good amount of new blood, so it could be anyone’s year in 2017!

5. Cool, what else ya got?
Really, that’s not enough? If you wanna get even more out of your derby experience, you can check out the merch booth and get hooked up with a T-shirt, meet the skaters before, during, and after the bout, dance along with the Brewcity Beerleaders, or if you’re feeling brave, volunteer for one of the audience participation halftime games. And if you still want to learn more about the game being played on the track, you can study up at wftda.com or brewcitybruisers.com, where you can also learn the skaters’ names and decide if you’re more Sonic Ruth than Sk8ty Perry. The fishnets and cages may be a thing of the past, but the names—and the punk rock, DIY spirit of a local crew putting on the best show in town—are here to stay.