Despite being an absolute fan favorite among Packer Backers, Green Bay wideout Jordy Nelson has yet to receive much attention in the lucrative world of athlete endorsements. Sure, he’s had some regional commercials for auto dealers and health care providers both in Wisconsin and his native Kansas. And though everybody who’s ever seen it has tried, Nelson’s acting performance in a 2013 Travel Wisconsin ad is simply unforgettable. Otherwise, most of the Packers pitchman duties seem to go to Aaron Rodgers and Clay Matthews these days.

About two weeks ago, Nelson landed an opportunity much cooler than holding a stick of Old Spice or hocking Fathead cutouts. He got his own cereal! Jordy’s Farm Fresh Flakes are the latest in the PLB Sports product arsenal. The Pittsburgh-based manufacturer seems to have cornered the market on passable food items made to honor “scrappy” and moxie-packed “gamers”—aka a bunch of folksy white dudes—in the NFL and MLB. Other PLB Sports products include Anthony Rizz-O’s (devoted to Cubs star Anthony Rizzo), the flagship and best-selling Flutie Flakes (Doug Flutie), Tyler’s Touchdown Crunch (Tyler Eifert), Ed McCaffrey’s End Zone and Ed McCaffrey’s Mustard, and Dustin Pedroia Black Bean Salsa. Yes, nobody knows salsa quite like Dustin Pedroia.

Nelson’s unlicensed, team-implicit contribution to the line of sports edibles is a frosted corn flake. The cereal is sold on the company’s site in two-packs for $10 (plus a debilitating $15 shipping fee). However, much to the dismay of customers who recently paid a total of $25 for two boxes of off-brand cereal they were still waiting to receive, Wisconsin stores began selling Jordy’s Farm Fresh Flakes for between $3 and $4 last week. Collector’s appeal and tangential Packers affiliation aside, was this stuff even any good? Like the Reggie White bar of yore, could these flakes be legitimately tasty? Or, like Gilbert Brown Peanut Butter and Najeh Davenport dump cakes, was it a case of ham-fisted marketing gone wrong. Milwaukee Record picked up a box and gave them a try. 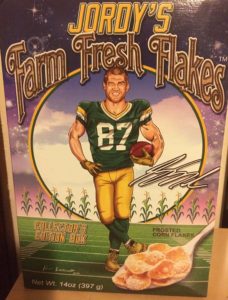 The Packaging: Upon picking up the box, any thought the presence of the word “Farm” in the name a coincidence is immediately put to rest. A semi-realistic, graphic novel-like illustration of Jordy stands grinning and clutching a football on a football field. Behind the football field there’s a row of corn under the stars in the rural skyline—unimpeded by the lights of the big city so, so many miles away. The illustration by Pittsburgh-based caricature artist Ron Kantrowitz also features some type of a full moon or, shit, maybe a “daylight hole” (patent pending on “daylight hole” by the way) or something. It’s weird.

[Update: Reader @TheGreatWebber pointed us to similarities with the Field Of Dreams movie poster.]

Some of the script is in green and yellow to gently suggest—but in no way legally claim—the Packers or the NFL signed off on anything before this was produced. The font of “Farm Fresh Flakes” has what appears to be slats of wood from a barn inset in the letters. No, it isn’t some glory boy wood that’s been painted bright red. Nah, true to Jordy’s spirit, it’s just meat and potatoes, workmanlike shade of weathered brown. For some reason, a replica signature is included. It adds no value to the box.

One side of the box features nutrition facts, which reveals evidence that the seemingly wholesome cereal actually has more sugar, calories, and carbohydrates than the same serving size of Frosted Flakes, not to mention less protein. This stuff seems better suited for a day of FarmVille than a day of farming. That isn’t reflected on the alternate side panel, which gives a bit of Nelson’s biographical information…while making sure to avoid litigation by eschewing the use of words like “Super Bowl” and “Packers” in the blurb:

“Jordy Nelson is a football fan-favorite, but did you know #87 has been farming longer than he’s been playing football?

“That’s right, before Nelson became a World Champion for Green Bay, he was working on his family farm in Leonardville, Kansas, planting crops and raising cattle from sunup to sundown. It was on the farm where Jordy learned the work ethic that helped him go from a walk-on defensive back in college to star wide receiver in the pros. Jordy still returns to Leonardville each year to farm, bringing his wife Emily and two song, Royal and Brooks with him.

“Now you can get ‘farm-powered’ too with Jordy’s all-new Farm-Fresh Flakes.” 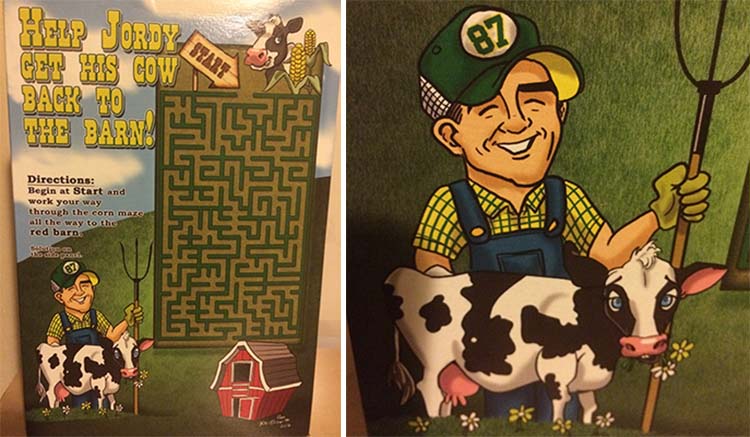 The back of the box shows an especially cartoonish version of Nelson that’s squinting and brandishing a pitchfork beside a cute cow, which the consumer must lead through a fairly simple maze en route to a red barn. Step up your barn consistency, PLB Sports! They call it a “Collector’s Edition Box,” but if the cereal sells well, there’s no indication the company will ever stop making it, which limits the scarcity and destroys any collector’s value. Expect to have years and years to buy Jordy’s Farm Fresh Flakes from the company who still manufactures assuredly shitty horseradish bearing the likeness of Ed McCaffrey, a wideout who retired 13 years ago.

The Cereal: The term “Frosted Corn Flakes” employed on the box is fitting, since it (despite having more sugar than Frosted Flakes) tastes as if a few scoops of Corn Flakes were thrown in the mix to somehow imply, uh, farming or whatever. It doesn’t say it on the box, but this must be enjoyed with a generous dousing of Vitamin D milk. Topping your Farm Fresh Flakes with anything less rich, fatty, and dense would be an insult to Jordy and other farmers everywhere. We tried to put almond milk on them initially, but a thick red, white, and blue force field appeared above the flakes. Then the cereal briefly became sentient and called us a terrorist. 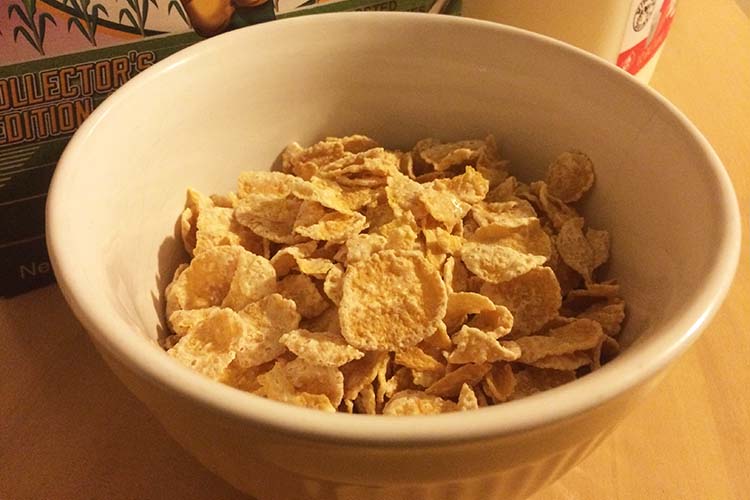 The Verdict: In all, Jordy’s Farm Fresh Flakes are fine. We’d bet the figurative farm on the cereal being identical to the no-longer-produced Flutie Flakes, just with new packaging made to appeal to the untapped mass of Green Bay Packer fans ready to huck their money at anything that even loosely incorporates a familiar player. If you’re seeking to take your Farm Fresh Flakes to the next level, we suggest topping them with some Aaron Rodgers Quarterback Gummies. It’s a combo that’s almost as sweet and satisfying as the Rodgers-to-Nelson connection Packers fans have come to know and love. 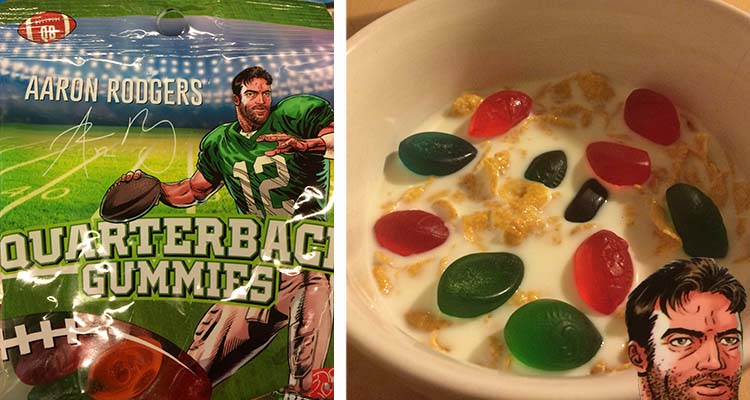 Not really. Putting gummies on cereal is fucking gross.