On July 12, 2016, Potawatomi Hotel & Casino hosted the inaugural Potawatomi All-Star Wiffle Ball Tournament. This “first of its kind” wiffle ball competition claimed to be the largest such tournament ever put together. With a room of plastic bat-wielding Milwaukeeans looking to make new, uh, athletic memories, I had no idea that history was about to be made.

The event called for 50 teams, and for $50 teams earned a place in the single elimination bracket with a gift bag including a voucher for a hot dog, non-alcoholic beverage, Big League Chew, and a Potawatomi-branded Milwaukee Home shirt. The biggest selling point to my team was being able to relive the glory days of bashing dingers in our parents’ backyard, which seemed to be the case for most participants. Another big marketing theme for the tourney was the opportunity to square off against Milwaukee Brewers legends Geoff Jenkins and Jim Gantner. To gain the right to take on the ex-MLBers, all you needed to do was win the entire tournament. The whole goddamn thing. 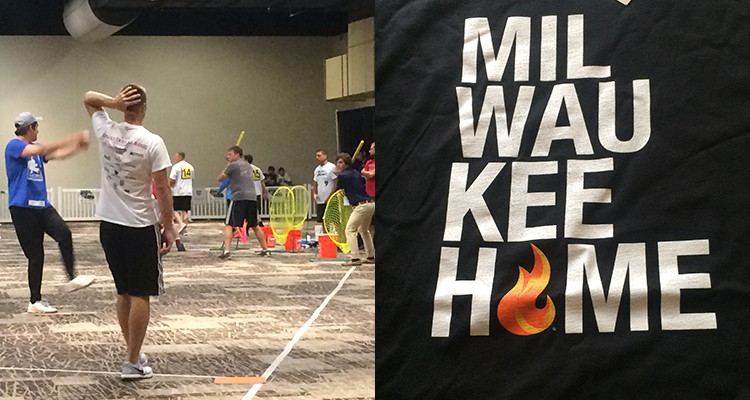 Upon arrival, we realized our team fell somewhere between the wiffle ball version of softball bros and the type of people who have only wiffled in flip flops at their family reunions. One of the biggest factors within the rules of this tournament, other than the fact that there was no base running and hits were awarded based on how “cleanly” the ball was fielded, was there was no limit to how fast pitchers could throw. With this in mind, we thought we had our golden ticket: our friend and teammate was the all-time saves leader at the University of Minnesota. Just like that, “Team Ghost Load” seemed destined for a deep run in the tournament.

Our first match-up was against Major Goolsby’s 1, which was naturally the first of two teams fielded (carpeted?) by the downtown sports bar. A potential Goolsby’s 1 vs. Goolsby’s 2 match-up had the crowd salivating, but with Gumby and Jenks waiting, we were poised to send these guys down Canal Street crying.

Everything quickly took a nose dive when we realized grown men throwing a wiffle ball as hard as they could just 40 feet from each other would result in very little action. Strikeout after strikeout after strikeout set the tone in what some would say was the greatest pitcher’s duel in Potawatomi Event Center history. After the five-inning limit was reached, the score was 0 to 0. Looking to the umpire, likely an unpaid sports marketing intern, we were informed that the winner would be whomever had the most hits. We lost, one hit to zero hits. Of the 44 games played, 30 of them ended in a score of 1-0 with the win potentially being awarded for having the most hits or simply winning a coin flip if both teams totaled the same amount. The dream was over in a very undramatic fashion.

Luckily, our heads weren’t hanging for too long when we received the news that we had weaseled our way into the consolation bracket. The consolation bracket was a group of four teams randomly chosen from the first round losers that would compete for a toilet bowl-shaped trophy and a chance to play “The Big Unit” (Bill Michaels, not Randy Johnson) and the rest of his crew from Sportsradio 105.7 The Fan. After channeling the spirits of Brewers past, we cruised our way through the Final Four and won the right to take our turn against the voices of Milwaukee sports talk radio.

During this final showdown, the wiffle ball gods of Potawatomi Hotel & Casino shined down upon us, as the poster boy of the tourney, Geoff Jenkins, stepped into the batter’s box while I was on the mound. I didn’t ask any questions about why he may be associating with the toilet bowlers. Instead, my mind quickly spiraled to the days when I trumpeted his name from the left field bleachers (then known as “Geoff’s Jungle”). What’s a Geoff Jenkins fan supposed to do in this situation? Was I supposed to try burning a heater by him so I could potentially (but not at all likely) tell the story of the day I struck out a former MLB All-Star? Was I supposed to lob up a meatball so the rest of my team could have the enjoyment of seeing Geoff Jenkins blast one more homer in Milwaukee? The indecision left me in a state of confusion that only a downtrodden Derrick Turnbow could understand. With an aggressive kick of my leg and a final whip of the ball, the result was not how this story was supposed to be told.

I beaned Geoff Jenkins with a wiffle ball.